Why are airplane windows rounded

Physics at the airplane window

Aircraft designers would prefer not to have windows at all, because these are weak points in the fuselage. This is due to the pressure difference: At today's usual travel altitude of around ten kilometers, the air pressure is only around a quarter of the normal value on the earth's surface of around 1000 hectopascals (hPa). That would be life-threatening for the passengers. Most of us are used to lower regions and for a long time can only endure the kind of pressure that exists on the Zugspitze, for example. Correspondingly, around three quarters (750 hPa) of normal atmospheric pressure are maintained in the cabin. Because of the higher internal pressure, the torso is subject to great stress, similar to an inflated balloon. Corners on windows would distribute the forces unevenly and would be starting points for cracks. That is why the familiar, rounded shape is less a question of design than simply a physical necessity.

Airplane windows consist of three plastic panes. The outer one is about an inch thick and firmly attached to the trunk. There is air between it and the middle pane for thermal insulation. This can flow back and forth through a tiny hole in the middle pane, so that ultimately the entire pressure difference weighs on the outer window. The innermost pane is at a certain distance from it and is not relevant to safety - it is primarily intended to prevent passengers from touching the middle pane. This not only protects the acrylic glass, but also protects the passengers from unpleasant cold sensations at outside temperatures of up to minus 60 degrees Celsius. 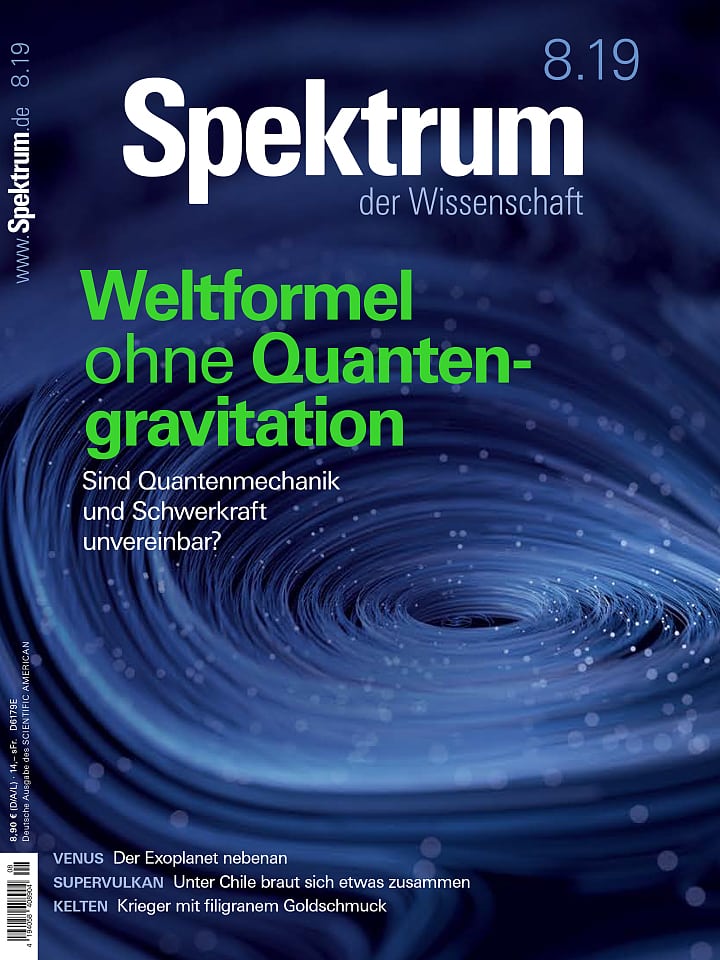 This article is featured in Spectrum of Science August 2019

The windows offer travelers an exceptional view of the landscape as well as a variety of physical phenomena. This includes not only the halos, glories and cloud structures that I have already described in previous editions, but also phenomena that arise when the aircraft window itself interacts with the environment. Sometimes several interesting effects show up at the same time. In houses with multiple glazing, the spaces between the panes are hermetically separated from the outside world. One of the advantages of this: The inner glass surfaces do not come into contact with water vapor, which can condense and cloud the view. However, such disks are sensitive to changes in the pressure in the environment and deform if it does not exactly correspond to the gas pressure in the space. This is particularly noticeable indirectly through optical phenomena (see »Wreathed cross of light in a square«, spectrum August 2017, p. 64).

Such a sealed construction would mechanically withstand double panes with the large pressure differences on the aircraft - hence the small hole to compensate for the inside of the cabin. However, this is often at the expense of review. But as if to compensate for the clouding of the eyes, interesting processes can be observed on the acrylic glass that you would hardly see anywhere else (see "How barred windows color the world", spectrum February 2013, p. 54).

First, there is a clear coating with tiny droplets in the middle area of ​​the outer window. This is because air and water vapor at a higher temperature from the cabin have got into the cool space between the outer and middle panes. The temperature drops below the dew point here, i.e. the steam, which is superfluous in both senses of the word, condenses into fine droplets. They are reflected on the colder outer pane. The microscopic water pearls are largely transparent; but the light is scattered on them, that is, deflected (see "Foggy Transparencies", spectrum November 2017, p. 70).

On different paths to lively colors

If the misted area shines in rainbow colors, this indicates very small droplets. The sunlight that comes in from outside is diffracted by them (see »Color Shimmering Fog«, spectrum September 2012, p. 46): The light triggers several elementary waves in different directions on the drops. If such waves, which have covered slightly different paths in the respective drop, meet in the eye of the observer, their mountains and valleys generally no longer coincide. They no longer have the same "phase", and when they overlap, individual wavelengths of white light cancel each other out, while others intensify. This changes the spectral composition, as a result of which the light waves no longer add up to white, but appear in iridescent colors.