Which country is culturally closest to China 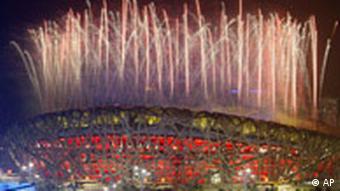 A spectacle admired around the world: the opening ceremony for the 2008 Olympics in Beijing

The Olympic Games in Beijing in 2008, the World Exhibition in Shanghai next year: China never misses an opportunity to present itself to a global audience - no matter how expensive it is. These events are only the tip of the iceberg. Beijing not only wants to conquer the department stores of the world, but also the minds. Li Changchun, responsible for propaganda in the Politburo, said openly at the 50th anniversary of China's state broadcaster CCTV at the beginning of the year: The nation with the strongest communication skills could spread its culture and its core values ​​worldwide and thus influence the world Li.

Economically, China has caught up enormously with the West. However, its cultural appeal lags far behind. Even the Olympic Games could not reverse the trend: the unrest in Tibet and the protests at the torch relay, the ongoing human rights discussion and the scandal over contaminated milk powder destroyed the image boost we had hoped for. Beijing is trying to counteract this. With a lot of money and at all levels. 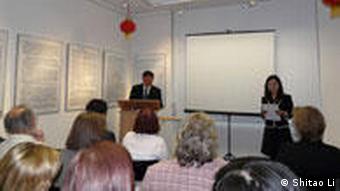 A Chinese lecture at the Confucius Institute in Frankfurt

Beijing plans to invest around five billion euros in its foreign media by 2011. The lion's share is to flow into the development of an international English-language television station under the direction of the Xinhua news agency. The English-language "Global Times" has been published daily since April. However, the editors expect a loss of around two million euros in the first year.

And Beijing has been investing heavily in setting up Chinese cultural institutes for years. The first Confucius Institute was founded in Seoul in 2004. There are now over 300 worldwide. In Germany alone there are eight, and three more are being planned. Anja Warnecke-Bi is the managing director of the Confucius Institute in Frankfurt. She believes that the Chinese government is investing so heavily in the institutes that China is not perceived as a threat in the rest of the world. Rather, people should get to know China and Chinese culture better and then be able to better assess them accordingly.

Chinese as the booming language 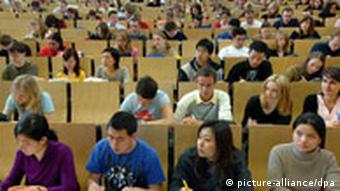 Chinese is increasingly becoming a boom subject at German universities

Since April 2008, the Confucius Institute in Frankfurt has mainly been learning Chinese. Language courses are at the heart of the work of all Confucius Institutes. Around 30 million people worldwide are learning Chinese. Around 100,000 foreign students travel to China every year to study languages. In New York, wealthy families are hiring Chinese nannies. The youngsters should learn in a playful way what their parents think is the language of the future.

The growing global demand for Chinese should please the soft-power strategists in Beijing. In the field of culture, the balance sheet is not so clear. China just found out about this in the run-up to the Frankfurt Book Fair. China is the host country. A joint symposium of the Frankfurt Book Fair and the host country committee four weeks before the start of the fair caused an international stir because of a scandal over the appearance of two regime critics - exactly the kind that Beijing does not want. Because China wants to look good above all, according to the Bonn sinologist Thomas Zimmer. For several years there has been talk of the ideal of the "harmonious society" in China. However, this would only cover up many problems.

Indulge in the glorious past 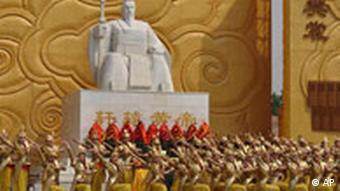 Chinese commemoration in honor of the mythical Emperor Huangdi

China wants to present itself as a modern, cosmopolitan country. At the same time, it avoids confrontation with critics and, paradoxically, likes to rely on the past in which it produced great art, poetry, philosophy. "You act out of an uncertainty because you don't want to show to the outside world that you are still a country in development", believes Thomas Zimmer. "China is on the lookout for a new, and as new as possible, cultural identity. From a Western perspective, this often gives these appearances on an international level something stiff and unreal."

In its endeavors to achieve soft power, China would have to learn one thing above all: credibility. But no matter how much money it can not be bought, it can only be achieved by openly dealing with criticism and unadorned truths.