What is Estonia famous for?

Jaan Kross (1920-2007) - writer
Jaan Kross studied law at the University of Tartu and was deported by the Russians to Siberia in 1946. He returned to Tallinn in 1954 and worked as a freelance writer, who was honored for his artistic work with numerous prizes and awards over the course of his life until he received the Culture Prize of the Republic of Estonia a year before his death. He wrote both modern poems, short stories and numerous historical novels dealing with the Russian occupation and the Estonian struggle for freedom.

Johann Voldemar Jannsen (1819-1890) - writer
Before working as a writer, Jannsen worked as a sexton and later as a teacher at the church school in Vändra. He became known for the translation of over a thousand hymns, but he was also interested in secular music, so in 1860 he published an Estonian songbook (Eesti Laulik) for choral singing. After working as editor of the newspaper Pärnu Postimees, he founded his own magazine (Eesti Postimees) in Tartu and supported the national movement of the Estonian people with his publications. He also wrote the text of today's national anthem of Estonia.

Anton Hansen Tammsaare (1878-1940) - writer
Coming from a poor background, Tammsaare managed to start studying law at the University of Tartu, but was forced to give up his studies due to tuberculosis. During his convalescence, he read numerous works by the most famous writers, which inspired him to later published books. Thematically, he dealt with the Russian occupation, its influence on the people and its consequences. He is one of the most important writers in Estonia.

Friedrich Robert Faehlmann (1798-1850) - doctor and linguist
Faehlmann was a founding member of the Estonian Scholarly Society and conceived the national epic "Kalevipoeg", one of the most important works of Estonian literature, which consists of several thousand verses and numerous chants about the giant Kalevipoeg. For the most important actions he made sketches, which were completed after his death by Friedrich Reinhold Kreutzwald (1803-1882) - doctor and writer. He continued the stories about Kalev’s son and was responsible for the publication of the national epic.

Arvo Pärt (born 1935) - composer
As one of the most important contemporary composers of classical music with a religious background, Pärt developed a special style of music called "Tintinnabuli" (ringing bells). He was of the opinion that a rhythmically "simple" musical language across borders and denominations can bring people to a communal experience and understanding of music.

Neeme Järvi (born 1935) - conductor
A world-renowned conductor who is invited to guest appearances all over the world and who has already conducted the best orchestras. As the former director of the Estonian Radio Symphony Orchestra and the Opera House, he was very successful for many years and won important competitions that earned him great prestige. He is currently working as music director in The Hague.

Eda-Ines Etti (born 1981) - singer
The singer from Haapsalu was chosen as a participant in the Eurovision Song Contest 2000 in Sweden on the 4th place and achieved international recognition with this good ranking. Renewed attempts to decide the Estonian preliminary decision (Eurolaul) for themselves and their song performance failed, but this has not changed the popularity of their published albums in Estonian and English.

Lennart Georg Meri (1929-2006) - writer and politician
The work of this man was shaped by his incessant commitment to his country. Coming from a diplomatic household, Meri traveled with her family and was taught in various languages ​​at numerous schools abroad. In addition to his native Estonian, he also learned English, Russian, Finnish, German, Latin and French. After returning to Estonia, the entire family was deported to Siberia. After many years in exile, the family returned to Estonia and Meri graduated from Tartu University with a degree in history and linguistics. Under the Russian rule he was forbidden to practice his learned profession and he worked as a dramaturge at the Vanemuine Theater, the oldest theater in Estonia. Meri published his first book in 1958. He was particularly interested in the study of the Finno-Ugric language and the relationship between the Finno-Ugric peoples. In 1963 he joined the Estonian Writers' Association and was elected honorary member of the Finnish Literary Society a little later in the 1970s. At the end of the 1970s, the Russian travel ban was lifted and Lennart Meri began promoting Estonia abroad. He took the opportunity to publicly point out the grievances in Estonia and became the first foreign minister of the now free Estonia after independence. On October 6, 1992, Lennart Meri was elected second President of the Republic of Estonia. 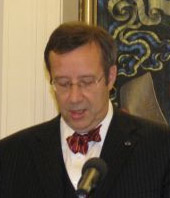 Toomas Hendrik Ilves (born 1953) - politician
As incumbent president and former foreign minister, Toomas Hendrik Ilves is a co-founder of the Social Democratic Party in Estonia and was politically active long before his election. He was born in Sweden because his Estonian parents lived there in exile. The family moved to America, where Ilves spent his school and university days and worked until 1983 after completing his psychology studies. Since he spoke his native Estonian, he became head of the Estonian editorial team at the radio station Free Europe in Munich in 1988. In 1993 he was appointed Estonian Ambassador to America and the foundation for a public political career was laid. In the following three years he also took on the embassy work in Canada and Mexico, returned to Estonia and was first elected Foreign Minister in 1996.

Andrus Ansip (born 1956) - politician
Born in Tartu, Ansip studied chemistry at the university there and after completing his studies worked at various banks before he decided to go into politics. In 1998 Ansip was elected mayor of Tartu as a candidate of the Reform Party (Reformieakond) and held this office until 2004. In September 2004, Ansip took over the party chairmanship from Siim Kallas, who as EU Commissioner and Vice President of the European Commission in the EU Parliament moved in. On April 13, 2005, Ansip became Prime Minister of Estonia.