How do photons carry electromagnetic force

Chapter 4
The momentum of the photon

So far we have got to know the first particle properties of light by looking at the quantization of the energy of light. We are now investigating situations in which one can prove that light also carries an impulse or, in other words, that photons also have an impulse.

In Section 4.1 we will first carry out a (classic) calculation that shows that an electromagnetic wave when it is reflected on a mirror exerts a pressure, the so-called radiation pressure, on it. This will give us a first clue about the momentum of photons. However, the historical route to the expression for the momentum of the photon did not lead via this calculation, but via an experiment carried out by Arthur Holly Compton around 1922. The effect he observed, the so-called Compton effect, will then be discussed in Section 4.2. The observation of the Compton effect provided the first experimental evidence of the momentum of a photon.

We calculate the radiation pressure that an electromagnetic wave exerts on a flat plate when it is absorbed (see Fig. 4.1). 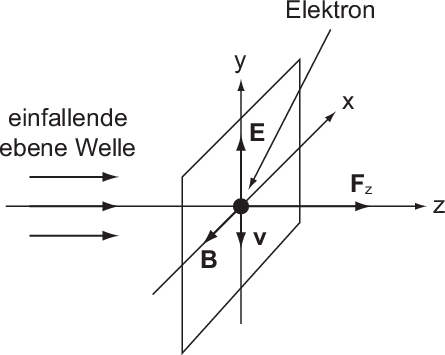 An electromagnetic plane wave with an electric field strength

on a plate. First we calculate the momentum transfer from the electromagnetic wave to an electron in the absorbing material.

An electrical force acts on the electron in the plate

In addition to this force, the electron experiences a damping in the material, which is caused by so-called mobility or mobility

is characterized. In balance between

and damping is the so-called drift speed

We now assume that the time in which this equilibrium is established is much shorter than the period in which the electromagnetic field strength oscillates. Under this assumption, we get an average drift velocity of for the electrons

with which the electron moves along the negative y-direction. We keep this averaging or neglect of the field strength oscillations for the following calculations. As a result, all of the following variables are to be considered under this averaging. For the sake of simplicity, we will omit the averaging line.

In addition to the electrical force, a magnetic force, which comes from the magnetic flux density, also acts on the electron

). This term is responsible for the radiation pressure. With (4.5) and the relationship

we get from it

For work per unit of time

, which is produced by the electric field at the electron, we get with (4.9)

of an electromagnetic wave on an electron of the plane plate

i.e. when an electromagnetic wave is absorbed in a material, an impulse is transmitted to it. The size of the momentum transfer is determined by the work

In the last chapters we saw that we can view light as a stream of particles (photons). If one wants to interpret the momentum transfer during the reflection of an electromagnetic wave at a mirror with this idea of ​​photons, one must assume that these have a momentum and like particles are elastically reflected by the mirror. In this case, the component of the photon pulse, which is perpendicular to the mirror, changes its sign and transmits twice as much momentum as in the case of absorption.

The momentum of a photon

we get from the energy

an electromagnetic wave that is an integral multiple of the energy

corresponds to a photon

So we get the following result

A photon has the momentum

of the photon, the following relationship applies

that is on the mirror surface

works, we can express it as follows

corresponds to the radiation intensity that is absorbed by the mirror.

As mentioned at the beginning, the historical way of expressing the momentum of a photon did not lead via the calculation carried out in Section 4.1, but via an experiment that Compton carried out around 19221.

Compton applied the radiation from an X-ray tube with a molybdenum anode (see Section 3.2.1) directly to a piece of graphite2 fall (see Fig. 4.2). He then analyzed the spectrum at an angle of

scattered radiation with a Bragg spectrometer (see Section 3.5) and compared it with the spectrum of the incident radiation. He used calcite as a spectrometer crystal (

) and an ionization chamber as a detector3. 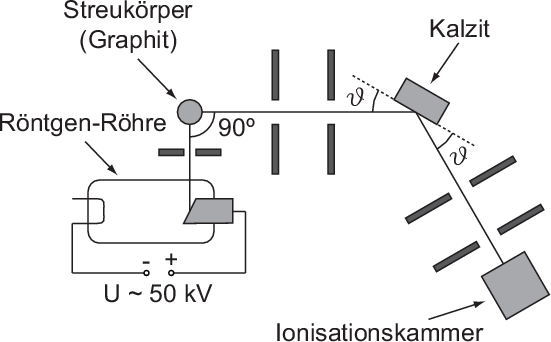 Fig. 4.2: Setup for measuring the Compton effect consisting of an X-ray tube as a photon source and a Bragg spectrometer to detect the scattered spectrum.

was scattered on graphite. 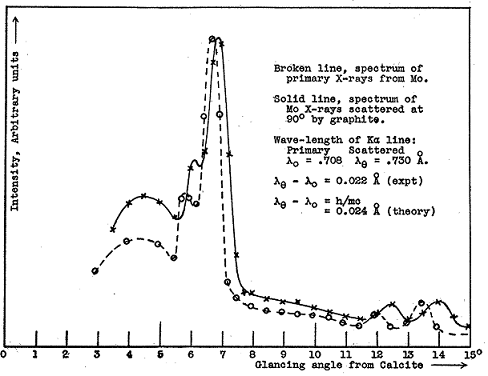 Fig. 4.3: Directly measured Bragg spectrum of an X-ray tube (dashed line) and after scattering on graphite (solid line). Original data from Compton from 1922 published in 1923 [3].

. The shape of the two spectra is essentially the same. However, the following essential result results: The spectrum of the scattered radiation is shifted towards longer wavelengths compared to the spectrum of the direct (unscattered) radiation. This wavelength shift is called the Compton shift.

In contrast to the scattering on which the Bragg reflection at the spectrometer crystal is based, what Compton observed could not be coherent scattering. Obviously there are other scattering processes as well.

An incident photon with the energy

collides elastically with an electron from the scattering body. In doing so, it loses part of its energy and momentum. The impulses and energies of the observed particles can be determined by considering the energy and momentum conservation of the entire system.

Before we deal with the calculation of this wavelength shift (Compton shift), let's first consider another more modern experiment on the Compton effect, in which significantly larger shifts in the wavelengths can be observed.

A source is used in this experiment (see Fig. 4.4)

Cs source. The emitted high-energy photons (gamma rays), which arise during radioactive decay, are directed onto a thin copper rod, where some of the photons are elastically scattered by electrons. The one at an angle

Scattered photons are measured with a scintillation counter consisting of a NaI crystal with a subsequent photomultiplier4 proven energy-resolved. 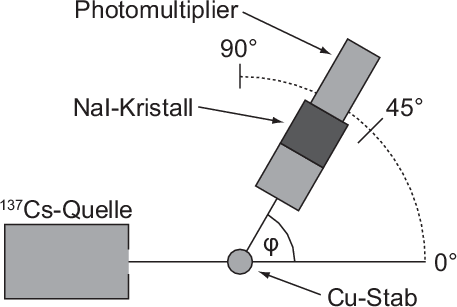 Fig. 4.4: Experimental set-up for measuring the Compton effect with gamma radiation from a

Cs source. A scintillation counter serves as a detector.

The result of the measurement is shown in Fig. 4.5 in a so-called polar diagram. Every scattering angle

and the photon energy of direct radiation

assigned by the respective distance between the measurement curve and the zero point. 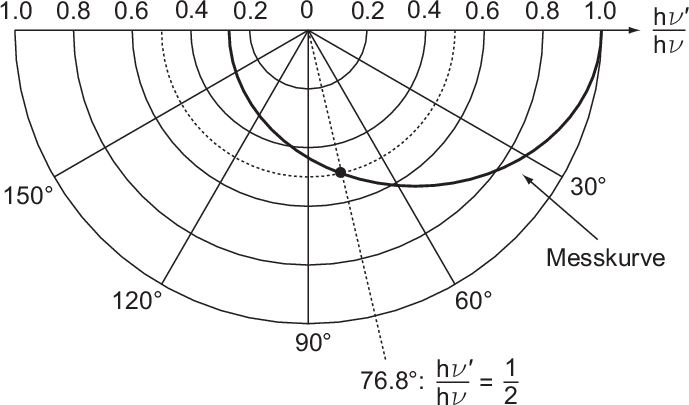 Fig. 4.5: Ratio of the scattered photon energy to the incident energy as a function of the scattering angle shown in a polar diagram.

The result obtained confirms the result of the historical measurement (see Section 4.2.1): The frequency (wavelength) of the scattered radiation is shifted compared to the direct radiation. Another finding is that the maximum of the under

measured spectrum occurs at the same frequency (wavelength) as the maximum in the spectrum of direct radiation.

a maximum can be observed, but also at the wavelength

of direct radiation. We will go into the explanation of this observation and the calculation of the Compton shift in more detail in the next section.

4.2.3 Calculation of the Compton shift

To calculate the Compton shift, we start from Compton's interpretation (see Section 4.2.1). An incident photon with the energy

collides elastically with an electron from the scattering body (see Fig. 4.6). The conservation of energy and momentum applies to the entire photon and electron system. We assume that the electron hit by the photon is unbound and was originally at rest. This is fulfilled to a good approximation in a metal, since the conduction electrons are only weakly bound compared to the energy of the incident photons and carry a small pulse. 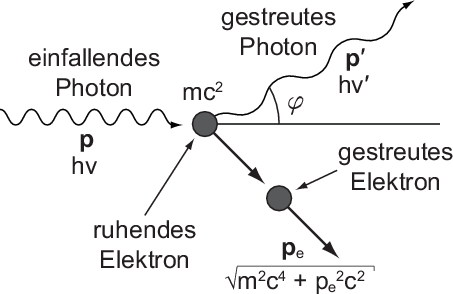 Fig. 4.6: Diagram of energy and momentum conservation in the Compton effect.

From the conservation of energy results

From the conservation of momentum we get

Shortening and inserting (4.20) yields after some transformations for the Compton shift

As mentioned in Section 4.2.2, in refined experiments in the scatter spectrum a maximum is observed not only at the shifted wavelength

of direct radiation. This means that in addition to Compton scattering, there is also coherent scattering. This is due to the fact that the electrons are bound differently in the scattering body, or more precisely: The scattering body contains different types of electrons:

If the electron hit by the photon is so strongly bound to an atom that the energy that the photon transfers to it is not enough to tear it out of the atom, there is no Compton scattering, but essentially coherent scattering. Or in other words: the larger the number of strongly bound electrons compared to the number of weakly bound electrons, the more dominant the coherent scattering compared to Compton scattering and vice versa.

Qualitatively, these three observations can be explained as follows:

In the Compton effect, a photon performs a fully elastic collision with a quasi-free electron. Thereby it gives up part of its energy to the electron. After the collision, the scattered photon has a lower energy and thus also a lower frequency than before the collision. In contrast to this, with the photo effect (see Chapter 2) a photon gives up all of its energy to an electron and disappears in the process. The impulse of the entire system of photon and electron cannot be retained under these circumstances and therefore a third collision partner (usually an atomic nucleus) must be present to which an impulse can be transferred. The photo effect can only occur with bound electrons.