What makes American pop culture popular around the world

"The American Way" in Germany

"NAZIS quit!" 1945 headlined in giant letters "Stars and Stripes", the magazine of the American armed forces. The four victorious powers divided the German Reich and Berlin among themselves. - Today the USA and Germany are partners. A lot has happened in the meantime. The exhibition "The American Way. The USA in Germany" in the House of History in Bonn gives an impression of this. Historical recordings, sound documents, objects and projections convey 68 years of German-American history.

"Without the USA, the history of Germany would be inconceivable," says curator Prof. Dr. Hanno Sowade. "How did the USA shape Germany? What ideas do Americans go out into the world with?" After two years of preparation, these questions can now be answered in the House of History in Bonn - until October 13th. 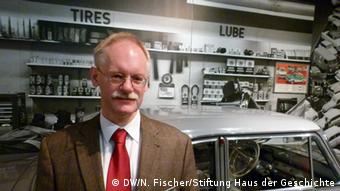 The exhibition structures the American influence in Germany into three areas: security policy, economy and (everyday) culture. "While influence - or the perception of influence - may have weakened a little in the area of ​​security policy," Sorade believes, "it has become stronger in other areas: If you talked about American music in 1945/46, it was something completely different than today. Lady Gaga is no longer perceived as American. She is everyday life, just like Apple and the iPod. "

From occupier to popular protecting power

Hard times prevail at the beginning of German-American post-war history. The Americans were occupiers at the end of the war. They dropped bombs on German cities and confiscated buildings and industrial plants. The German image of the enemy of the war was heavily burdened. But the USA quickly tried to change that: They founded the private aid organization "Cooperative for American Remittances to Europe": The CARE packages saved the survival of many Germans.

The fact that the Americans became more and more sympathetic to the Germans was primarily due to the Marshall Plan, with which they provided economic support to the nations suffering from the consequences of the war. And the "raisin bombers", the Allied aircraft that supplied West Berlin with food and aids at the time of the "Berlin Airlift". From June 1948 to May 1949 the Soviet occupiers blocked all road and rail connections to West Berlin. 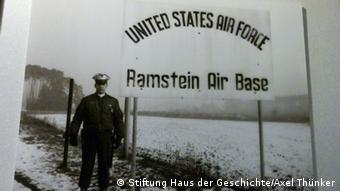 American soldier in front of the Rammstein Air Base

The RIAS and the Elvis fever

But not only the political, economic and military aid from the USA was well received in Germany - especially everyday American culture found its way into German living rooms and beyond: Elvis Presley and Bill Haley became stars in the 50s and 60s. RIAS, the radio in the American sector, played a major role in making music from the other side of the ocean so successful. More and more Germans wanted to hear the new music - including that in the former Russian occupation zone.

The GDR leadership did not like that at all: They distributed anti-American posters and tried to prevent RIAS reception with jammers. Nowadays Germans can laugh about it: In movies like "Friendship!" Matthias Schweighöfer and Friedrich Mücke leave the GDR and are "The first Ossis in America".

The American influence in Germany is evident not least in the countless Hollywood productions that flicker across the screens in German cinemas. The exhibition dedicates a separate room to the American celluloid dreams. A well-known American "actor" greets the visitors at the entrance: the likeable robot R2D2 from George Lucas' Star Wars saga was flown in to Bonn especially.

Not only American films but also American products conquered Germany in flight: Coca-Cola and hot dogs, blue jeans and Hollywood swings, street cruisers and fitted kitchens. Tupperware was also popular: many German women invited consultants to "Tupperware parties" at home and then bought the colorful plastic products on site. 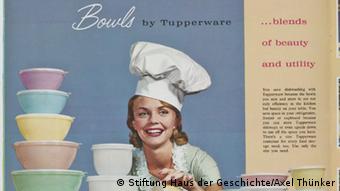 Poster of the American company Tupperware

From the "Ami Go Home" to a strong partnership

Relations between the two countries were by no means always unclouded: at the end of the 1960s, the Germans took to the streets against "US imperialism" and the Vietnam War. At the beginning of the 1980s, protests were made against the stationing of new US medium-range missiles in Germany. And in the 2003 Iraq war, Germany did not side with the USA either.

Today the USA and Germany are partners who - especially after 9/11 - face global challenges together. For the first time, evidence of the terror of September 11, 2001 can be seen outside the USA: including the remains of an airplane wing, a floor sign from the 102nd floor of the World Trade Center and the tattered employee ID of a Deutsche Bank employee who worked at the WTC worked. 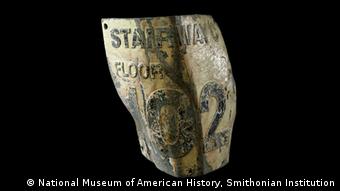 Testimony to the terror: floor sign from the 102nd floor of the World Trade Center

Together in the future?

If you walk quickly through the exhibition, you will be impressed by how Americanized Germany is today, even if there are many differences between the two cultures. "The American Way" reveals a cross-section of the image that Germans have of the "land of unlimited possibilities".

But how is it actually the other way around? How do Americans think of Germany? Overall, Hanno Sorade believes, the image of Germany in America is very positive, open-minded and accommodating. He believes, however, "the Americans are not yet fully in agreement on this issue. Just as we Germans will have to define our image of America in the next few years." That becomes clear if you look at the last US presidential election alone: ​​"Obama has been elected, America is good. In short, if the opposing candidate had been elected, America might have been seen as problematic."