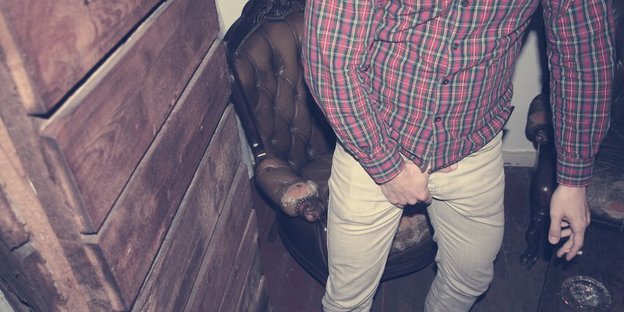 The slogan of the fapstronauts: Get your life back under control. Image: photocase / madochab

The slogan of the fapstronauts, as they call themselves, is: "Get a new grip on life" - Get your life under control again. There are nearly 150,000 fapstronauts on the reddit forums, where NoFap began.

The experience reports are remarkable. On the forums, the young (and old) men write about salvation. About the fact that their “social fears are going away”, that they feel “alive and full of energy”. They report that their erection problems have disappeared and that they finally dared to speak to women.

The environment is fuss, it is what we eat, how we talk, how we dress. How we live, learn, love, work. Children are stupid, homosexuals, foreigners, old people. Animals anyway. So everything beyond the "hard issues". The taz makes three weeks of fuss, four pages every day. At the kiosk, eKiosk or directly with a trial subscription. And the highlight will follow on April 25th: the big drama congress in Berlin, the taz.lab 2015.

From church to NoFap

From there, it's not far to NoFap. Its basic idea is scientific through and through: NoFap started on reddit with a discussion about a scientific study. It said that a man's testosterone levels would peak after seven days of abstinence. The first tried, and NoFap was born.

Today anyone who finds NoFap on the internet is referred to Gary Wilson. Gary Wilson is the no-wanker scientist. On his website he explains his thesis: The human brain is not ready for the amount of easily accessible hardcore pornography that exists today. Arousal arises from novelty in the male brain, according to Wilson. When the brain receives a new sexual stimulus, it releases dopamine. The Internet enables an infinite pool of “novelty”, which means that young men in particular are riding a wave of dopamine. This intoxication would practically wipe out the reward system in the brain, the physiological and psychological consequences are: loneliness, pathological shyness, depression or inability to relate.

Hendrik was also the first to find Gary Wilson. “When I saw the video, I was struck by lightning,” he says. "I finally understand what the problem is."

Wilson also describes a way of healing on his website: If you refrain from pornography long enough, you can repair your reward system. The fapstronauts call this reboot. They are rebuilding the hard drive of their sexuality. Various sites on the Internet offer support for such a reboot. They often call it a challenge. Hendrik is doing one.

That is also understandable. Because NoFap and all the many websites picking up the trend promise something. Boosted by the Internet, forums, Facebook and hundreds of memes, NoFap promises a better life: more productivity, more energy, more women. And all of this is just a flick away. Or just no move.

It's a complicated matter. That’s always sex. Access to an infinite archive of internet pornography changes people's sexuality. That is a legitimate concern. To get rid of it, people renounce an essential part of their sexuality.