"We welcome President Putin and appreciate the Russian role in the region," wrote the national Palestinian daily "Al Quds", still euphoric at the start of the Russian President's visit. But other events quickly pushed Vladimir Putin's visit to Israel, the Palestinian Territories and Jordan into the background: the downed Turkish military plane on the border with Syria, the discussions following the Egyptian presidential election and domestic political issues dominated the headlines in most Arab and Israeli newspapers.

Hope to counterbalance the USA 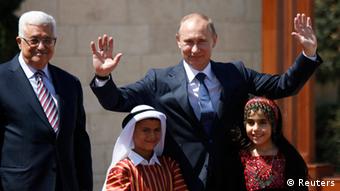 The few comments that appeared in the Palestinian media on his visit either praised Russia's role in the region - or expressed disappointment that this role as a counterbalance to the United States has so far hardly borne fruit.

While Russia is criticized in the West for its cooperation with the Damascus regime, the "Al Quds" quoted at the beginning expressly praised Moscow's position in the Syria crisis: "Russia plays a very efficient role in the Syria conflict, it is opposed any military intervention from outside. (...) In addition, Russia plays a more objective role in the conflict over the Iranian nuclear program. (...) We hope that Moscow will end the Western political monopoly in the region and restore the balance. "

"The little pilgrim tsar is visiting us"

The also supraregional Palestinian newspaper "Al Ayyam" struck a more critical tone. In an editorial entitled "The little 'pilgrim' Tsar visits us" it said: "Russian President Vladimir Putin visits the Holy Land like a political 'pilgrim'. (...) But Russia has not yet managed to organize an international peace conference on the model of Madrid 1991 ". In doing so, the paper took up a request made by Palestinian President Mahmoud Abbas, which he himself put forward during Putin's visit.

The Palestinian media recorded that Putin praised Abbas' "responsible position" in the peace process, and that a street in Bethlehem is now even being named after the Russian president. Nevertheless, "Al Ayaam" also showed disappointment: "Except in Iran and Syria, the USA has almost a monopoly on solving the conflicts in the Middle East, especially after the Arab Spring." 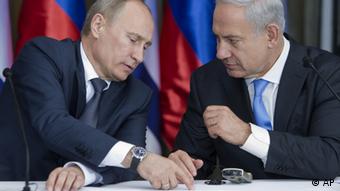 The response to Putin's visit in the major Israeli newspapers was even more critical. The Jerusalem Post wrote, "The differences of opinion between Israel and Russia cannot be overlooked. Despite the close ties between Jerusalem and Moscow, the Kremlin supports states that are strongly hostile to Israel, particularly Syria and Iran."

However, the commentator added: "Russia is not actively trying to promote Israeli interests in the region. But it is also not interested in undermining the Jewish state. Israeli and Russian interests may not mesh. The differences of opinion are by-products the Russian attempt to counteract American influence in the region. "

The Israeli newspaper "Maariv" went to court with the Russian president more sharply. "Tell him the truth," headlined the newspaper's editorialist at the start of the visit and wrote: "Almost all of Israel's important interests are linked to Russia. That is why we look the other way and play with (...) It would be nice to tell Putin the truth or at least point it out to him between the lines. Someone has to explain to Putin that the Russian stance on the massacre in Syria is unacceptable. Someone has to explain to him that Russian hypocrisy allows Al-Assad to massacre his people and that an axis the evil of Tehran through Damascus, Beirut, Gaza and perhaps now also Cairo threatens world peace. " 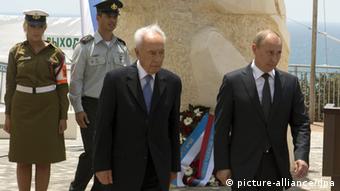 In Israel, Russia is criticized not least for the fact that it has so far blocked stronger action against Syria and the Iranian nuclear program in the UN Security Council. After speaking with his Russian counterpart, President Shimon Peres expressed the hope that Russia would "fight fascism and not allow similar threats".

The Israeli Prime Minister Benjamin Netanyahu also brought Putin together with Russian immigrants - a protocol trick that, according to general opinion, should clarify to the Russian President the dangerous situation in Israel using the example of the Russian Jews living there. Israel sees itself threatened above all by the Iranian nuclear program and the martial anti-Zionist rhetoric of the regime there and is considering countermeasures. Nevertheless, during his visit, Putin once again warned of the incalculable consequences of a military strike against Iran.