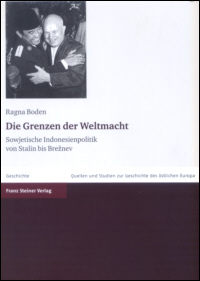 In an impressive study recently, Odd Arne Westad highlighted the outstanding importance of the so-called Third World for the Cold War and the relevance of the interrelationship between North-South and East-West conflicts for understanding today's global problems. He rightly referred to the extended archive access, especially in the former Soviet Union, as a new opportunity for research. [1] Westad, however, focused his presentation on the 1970s and 1980s and thus on the direct interventions of the superpowers. The formative phase of the interlinking of decolonization and the Cold War was thus largely excluded, although, of course, it was precisely in this phase that essential decisions were made. With a view to the Soviet Union, the rest of the research has so far only rudimented the new challenges and opportunities. a. focused on early Cold War crisis points - Korea, Vietnam, the Middle East and Cuba.

With the analysis of Soviet-Indonesian relations in her Marburg dissertation (2005), Ragna Boden breaks away from this selective understanding. The subtitle of their study is a bit misleading, however: Not even 20 of the 370 pages are devoted to the Brežnev era, and within this it is ultimately only about the period up to 1967/68. This accentuation makes perfect sense, however, since the bilateral relations after Chruščev and Sukarno's dismissal inevitably had to go through a phase of rethinking and redefinition. The time limit is also unavoidable in terms of research: the Russian sources, which in principle gush unevenly, dry up almost completely for the 1960s, and the Indonesian archives unfortunately remained closed. The actually uneven and not always equal access to files in Moscow can hardly be guessed from behind the lavish list of sources for the work, but more clearly in the annotation apparatus and could have been discussed more aggressively and problem-consciously throughout the presentation (25 f.). [2] Incidentally, the materials listed by Boden from the main engineering department of the State Committee of the USSR for Foreign Economic Relations in the Economic Archives have long been closed again, while files of the CK Foreign Policy Commission or the Molotov holdings in the former party archive are new - or again - opened.

Ragna Boden has set ambitious goals in her work. Following the New Cold War History and post-colonial theoretical debates, she traces the diverse interactions between the USSR and Indonesia and thus dissolves the one-sided focus on the superpower. In doing so, she wisely does not limit the history of the relationship to classic diplomacy or economic relations, but rather expands it to include cultural perceptions, for example, and convincingly locates the Soviet-Indonesian relations in Soviet foreign policy towards the Third World. The division of the relationship into a Stalin, Chruščev and Brežnev period corresponds to classic turning points in the history of relationships. The study shows that this sometimes conceals lengthy transition phases and important continuities. In accordance with the comprehensive approach, Boden works through a multitude of relevant relationship fields: ideological worldviews, diplomatic relations, the contacts of the CPSU with the Indonesian counterpart PKI, economic relations including Soviet military aid, aspects of Soviet Indonesia research, scientific and cultural relations, the importance of Islam for the bilateral relationship as well as the level of personal contacts among politicians.

The desired "integrating approach to perception and political practice" can only be mastered with a "pluralism of methods" (17), which dominates the soil with great sovereignty. However, the enormous weight attached to personal diplomacy is questionable, while aspects of cultural "foreign representations" are neglected in the analysis of state visits (115-149). [3] The example of the strictly controlled Muslims in the USSR finally makes it clear that concepts of international social relations can sometimes be difficult to transfer to the Soviet case. Cultural and scientific contacts were also exploited by the USSR - and Indonesia - and hardly gained any independence.

The USSR, like Indonesia, set mainly classical priorities in their relations. Diplomatic and economic relations have been given the highest priority in Jakarta, as in Moscow, and their description and analysis are rightly at the center of the study.

The dual line of party and state relations retained their importance after 1945. At the state level, the USSR initially gave the young Indonesia, desperately struggling to recognize its independence, only propaganda support. On the other hand, it was difficult to establish diplomatic relations. It was only in 1948 that Molotov recommended the recognition of Indonesia, since this was the only way for the USSR to gain influence. Indonesia now deliberately delayed the negotiations, so that the exchange of ambassadors did not take place until 1954: At this point in time the young republic was stable enough to be able to afford internal political disputes about the course towards Moscow.

The Soviet side was often surprisingly passive in bilateral relations and reacted more frequently to external impulses than to take the reins of action into its own hands. Thus, the Indonesian partner shaped the relations, which were much intensified under Chruščev, to a far greater extent than the balance of power would suggest. As a result, Moscow's goals could be reduced to absurdity in practice. The clearest expression of this was the immensely high share of Soviet funds, which Sukarno directed against Moscow's fundamental considerations in prestige and military projects. Regardless of this, economic considerations always played a role for Moscow military aid. The increasing radicalization of Indonesian politics clearly ran counter to Soviet political intentions: Sukarno's "Smashed Malaysia" campaign from 1963 onwards endangered not only its own global policy of détente, but also the repayment of Soviet loans. The Soviet-Indonesian alienation was stopped less by the deposition of Chruščev than by the overthrow of Sukarno. The wave of persecution against the Indonesian Communist Party that began in 1965 did not prevent Moscow from reaching a pragmatic compromise with the new strong man in Jakarta, Suharto. Such maneuvers make it clear once again how far strategic-tactical considerations of the Kremlin could emancipate themselves from ideologically formulated long-term goals without these being abandoned.

The weak commitment to the persecuted brother party was apparently also influenced by Indonesia's susceptibility to Chinese positions. Regular contacts between the parties can only be documented under Stalin in the late 1940s and 1950s. Moscow did not play an active role in Communist insurrection plans and actions in 1948 (as it did later in 1965). The thoroughly unsuccessful "Maidun" revolution of 1948 rather led to a relative ideological autonomy of the PKI and its leadership from Moscow in the long term against the background of the break-up of the PKI and the consequent forced change of cadre. From the 1950s onwards, the Soviet turning away from Stalin, the course of the Cuba crisis, the Soviet-Chinese tensions and the nationalism of the PKI did not leave the Soviet-Indonesian party relationship unaffected. The PKI came closer in the communist fratricidal dispute in Beijing, Sukarno's foreign policy confrontation course against Malaysia and the UN.

Ultimately, the Indonesian weight at the state level and with regard to the Brotherly Party proved to be a strong obstacle to the realization of specific Moscow ideas. These suffered, and this is the essential finding for the Soviet global positioning, beyond ideological beliefs from a strange vagueness and inconsistency. Contrary to western - real or pre-empted - fears, the alleged center of world communism did not have a comprehensive, conceptually well thought-out, long-term and multi-stranded "Third World Strategy". [4]

[4] For example the programmatic title by Alvin Z. Rubinstein, Princeton 1988.