A minimum wage of 15 will cause inflation

Globalization and technical progress are seen as enemies of the
Workers. But is the real problem with the unions? 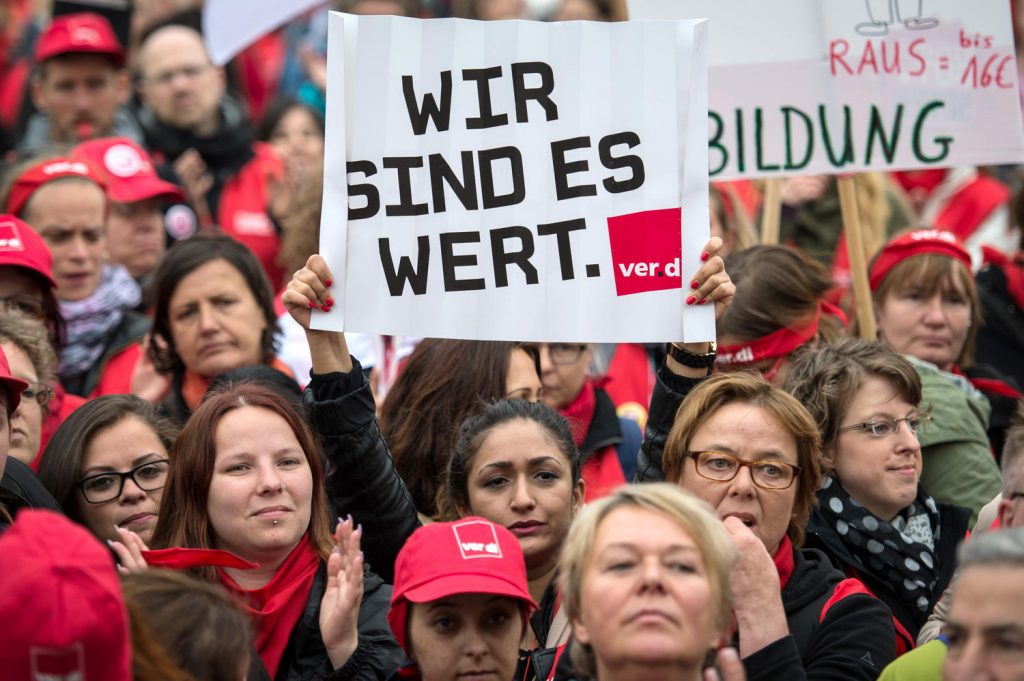 There's something wrong with the economy, or at least it's acting weird, and it has been for years. Before Corona, unemployment in the United States and Germany sank to ever new lows. But the labor shortage has not resulted in huge wage increases, especially not in America. Workers are getting a smaller and smaller share of growing prosperity, at least in the United States. And because wages are not rising, prices also remain relatively low.

Economists have been thinking about this phenomenon for years and have always found different approaches - but none that can explain everything completely. Now, however, Harvard doctoral student Anna Stansbury and her professor, former US Treasury Secretary Larry Summers, want to bring all of this down to a common denominator. If the economists' gaze lifts from the immediate Corona crisis, this work can cause even bigger discussions.

So far, the explanations have often been based on globalization or technical progress. It works like this, for example: Globalization has brought billions of cheap workers from poor countries into the world economy. So these people get richer, but the wages of the middle class in the rich countries are depressed. After all, employers can always threaten to emigrate. The unions can do little, so they too are becoming less important.

It is similar with technical progress: it makes many mediocre qualified positions superfluous, it is often said. At the same time, the prosperity gains from new technology are not yet so great that they are causing enormous wage increases everywhere. The unions could do little to counter this either, so they are becoming less important.

The thesis is further developed as “superstar economics”: the most technically advanced companies pay high salaries, but again not as high as they could. In addition, they only need a relatively small number of employees - and still capture ever larger market shares. The inequality is correspondingly large, because the abandoned companies can no longer pay their many employees large increases in salaries.

The United States in particular does not care enough about maintaining competition, as Thomas Philippon recently criticized. Against this, unions can do little, so they are becoming less important.

The power of the trade unions is waning

In the study by Anna Stansbury and Larry Summers, a new explanation comes to the fore: the power of the trade unions themselves. After the experience of the 1970s, when the so-called “stagflation” brought high inflation and high unemployment, the power of the trade unions was broken in many countries, for example in Great Britain, where the miners did nothing against Margaret Thatcher's policy even with a year-long strike but also in the United States, where Ronald Reagan weakened the unions with new laws. Stansbury and Summers now argue: It was actions like this that hold back wages and inflation to this day. So economists say: The “NAIRU”, i.e. the unemployment rate, falls below which inflation rises (the “Non-Accelerating Inflation Rate of Unemployment”)

To do this, they bring up a lot of arguments. Globalization alone cannot play the decisive role, they say: then wages in sectors with high competition from abroad would have to suffer particularly - but they do not. The market power of the "superstars" could not be the reason either, say Stansbury and Summers, because in fact the employees of large corporations have less and less wage advantages over the employees of other companies. 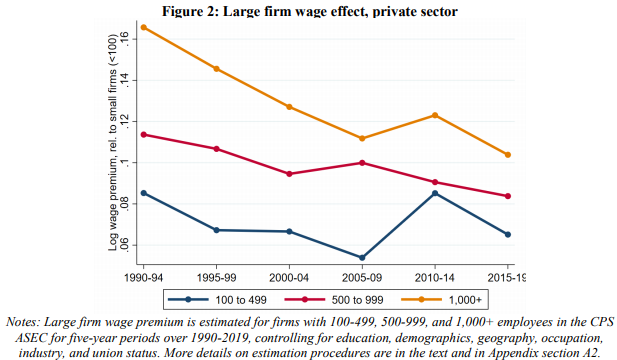 © Stansbury / Summers The wage advantage of large corporations is shrinking.

In addition, economic theory expects that companies with growing market power do not employ as many people. But if wages come under pressure because the unions lose power, then what happens when prices fall in conventional markets: demand increases and more people are hired.

In the end, in any case, the share that workers get from wealth has been falling in the United States for years: the so-called "wage share". The authors see in their thesis a further contribution to the explanation of the low interest rates: Because more and more money ends up with the rich, who save a lot anyway, more and more savings are looking for good investment opportunities. So interest rates go down.

There is some contradiction

The thesis will not go unchallenged. In a first reaction, the liberal economist Tyler Cowen suggests a different explanation: It is not the falling power of the trade unions that is to blame for the wage development described above. Rather, it is more visible today who is more important to companies and who is less important. Therefore the salaries of some employees are increasing while those of many others are decreasing. In general: Start-up founders are actually paid for their work, but they often get their income in the form of company shares, the value of which increases, which is initially counted as capital gain. If you take that into account, then the wage share does not fall at all. Nevertheless, Cowen calls the study by Stansbury and Summers "one of the best of the year".

Even if Stansbury and Summers are right, the unions' loss of power would not only be disadvantages. After all, it would then have enabled lower unemployment. This is a reason to be happy, as few strokes of fate have made people as unhappy as unemployment. In the next step, low unemployment can also lead to rising wages at some point. Germany shows how this works: here the unions are even more powerful than in Great Britain or the United States.

Nevertheless, their wage restraint, together with the Hartz reforms of the noughties, contributed to the fact that unemployment was pushed back and Germany had almost reached full employment before the Corona crisis. In Germany, workers then had at least such high wage increases that their share in economic output stabilized. However, inflation remained low. There are still some puzzles to be solved.

Why don't wages go up