Why time has the fourth dimension

Journey to the fourth dimension

The free space has three directions, the length, the width and the height or depth. There is no fourth. Or maybe yes? Mathematicians and physicists have no problems whatsoever with the fourth dimension, and sometimes there are more. So join us in the world in which you need at least four coordinates for each point.

Friedrich Schiller expressed it most beautifully: “Three times is the measure of space. / Restless onward without ceasing / Strive for length away in the vastness; / It pours itself endlessly width; / For no reason it lowers depth himself. ”He said that in the Proverbs of Confucius. In science it is said a little drier: Space has three dimensions, and each point has an x, a y and a z coordinate. We see it in everyday life; Since virtual reality has existed, it has also been programmed in the computer.

We cannot imagine a fourth dimension; for a long time mankind was content with three. Then came Gustav Theodor Fechner, professor of natural philosophy and anthropology at the University of Leipzig. Under the pseudonym Dr. In 1846 he brought Mises out a small volume called “Four Paradoxes”. The second chapter was entitled The space has four dimensions; it sought the fourth mentioned above. Fechner found them too, but not in geometric space. The fourth dimension for him was time. 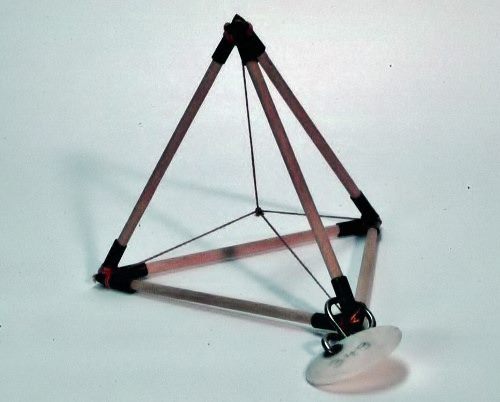 Model of a four-dimensional tetrahedron (5-cell) according to Victor Schlegel. (Copyright 2019 Model Collection, Mathematical Institute of the University of Göttingen)

Fechner's idea of ​​combined space-time appealed to science fiction writers; many a time machine was launched in it. The astronomer Karl Friedrich Zöllner also taught in Leipzig. He interpreted the fourth dimension spatially: he believed it to be the residence of spirits. With the help of a spiritualist, he contacted them in 1877. They untangled knots in a string for him; then Zöllner described his experiments in a long book that caused a huge scandal.

Serious research into the spatial dimension began in 1880. The American mathematician Irving Stringham made the first drawings of four-dimensional objects, again in Leipzig. In the same year, the English teacher Charles Hinton wrote a generally understandable presentation. In 1884 his German colleague Victor Schlegel built the first models - see above. He had no direct insight into the higher dimensions, but imagined the projections of geometric bodies into the familiar three. 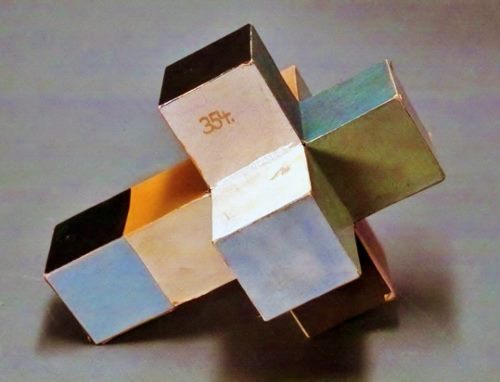 Model of a hypercube before being transferred to the fourth dimension. (Copyright 2019 Model Collection, Mathematical Institute of the University of Göttingen)

The most popular 4D object is the hypercube or tesseract. It is created by extending a 3D cube into the fourth dimension. A shadow image of the 32 edges can be seen. Another representation is based on a kit; it gives at least an impression of the final tesseract. First, eight cubes are connected in three-dimensional space. Then you fold seven of the eight up in the fourth dimension and close the hypercube. Salvador Dali immortalized him in a famous painting.

There are also round things in the 4D world. The hypersphere unites all four-dimensional points that have a certain constant distance to a fixed point. Its surface is a curved three-dimensional space. That sounds worse than it is. In that room it is like in our everyday world; it is open in all directions. It is not infinite, but repeats itself over and over again. A video shows that very nicely. Mathematical laws such as the axiom of parallels do not apply. 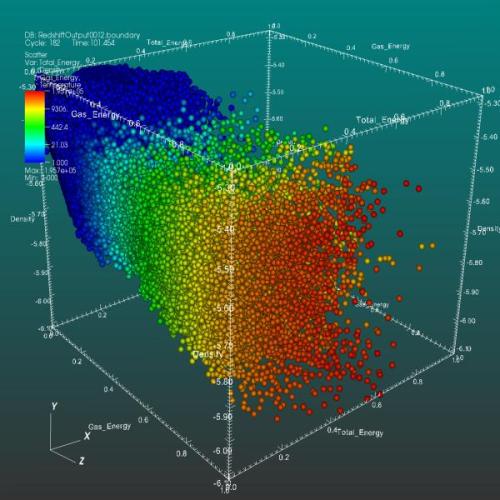 4D scatter plot: three dimensions are required for the positions of the data points, the fourth for another value. This is coded via the color.

In this way, we get an idea of ​​what is happening on the outside of a 4D body. In conclusion, let me say that there are dimensions not only in geometry, but also in daily life. When we deal with four numerical values, we are operating in an abstract space with four dimensions. One example is the color space in the CMYK model, the palette of printing colors. It is based on the scales for cyan, magenta and yellow ("Yellow"), plus a fourth for the black component ("Key").

Another case: Places in the earth's atmosphere have two coordinates and an altitude above sea level. We can now assign a temperature to each location - so we have a room with four dimensions again. In meteorology, “4D data” are the most normal thing in the world for which there is software for visualization. But if you want to learn more about the horrors of the fourth dimension, we recommend the magic garden of mathematics. Our topic is in the penultimate chapter. We would like to thank Professor Laurent Bartholdi from the Mathematical Institute of the University of Göttingen for the two model photos.