Can dark matter be captured

Astrophysicists have been looking for direct evidence for dark matter for a good 80 years. Now, for the first time, the AMS detector on the International Space Station could actually have captured particles that emerged directly from this exotic form of matter. As researchers from NASA and CERN report, the instrument registered an excess of positrons - the antimatter counterpart of electrons - in the first year and a half of its life. According to a common theory, however, these arise when the as yet unknown particles of dark matter collide with one another.

Much of the mass in our universe does not come from stars, gases or planets, but is due to dark matter. This exotic form of matter is invisible and cannot be directly measured or detected, but primarily interacts with normal matter due to its gravity. According to current theory, it influences the rotation of galaxies, for example, and holds these star clusters together. Although dark matter has been postulated for more than 80 years, its existence has never been directly proven. What it consists of, which particles it form, has also been controversial and ultimately not explained.

The Alpha Magnetic Spectrometer (AMS) on board the International Space Station (ISS) has now delivered initial results that at least support the existence of dark matter. The instrument, which has been working since May 2011, is basically a detector for various charged particles of cosmic rays. In the first year and a half of operation, the AMS recorded 25 million events, of which 6.8 million consisted of electrons and their antimatter counterparts, the positrons.

Normally, almost the same number of both types of particles would have to go into the network, but the current evaluations show that the AMS has captured 400,000 more positrons. This represents the largest excess of high-energy antimatter that has so far been measured and analyzed directly in space, report the researchers from NASA and the CERN research center near Geneva involved in the AMS experiment. 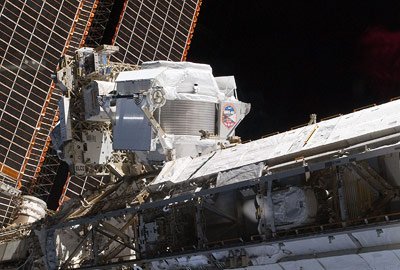 View of the Alpha Magnetic Spectrometer (AMS) attached to one of the cross braces of the International Space Station. © NASA

Theoretically, such excess positrons could arise when two dark matter particles collide and annihilate each other. According to a common theory, dark matter consists of so-called Weakly Interacting Massive Particles (WIMPS), which are virtually their own antiparticles. Similar to normal matter and antimatter, they cancel each other out when they collide. In the process, it is assumed, high-energy gamma rays, antiprotons or positrons should arise.

In fact, the particles recorded by the AMS neither showed a significant variation over time nor did they come from a preferred direction in space. According to the researchers, this suggests that they could have arisen from the annihilation of particles of dark matter. "These features show evidence of a new physical phenomenon," they write.

Clarity may be in a few months

The AMS measurements are the most accurate and comprehensive that have been made by cosmic positrons to date. Nevertheless, the results are not quite sufficient to safely rule out other possible explanations, as the astrophysicists emphasize. Theoretically, such antimatter particles could also have been ejected by pulsars in our galaxy. The exact distribution of the positrons over different energy ranges can, however, provide information as to which source is more likely. “In the coming months, the AMS will be able to tell us clearly whether these positrons are a signal for dark matter or whether they come from another source,” says AMS spokesman Samuel Ting.

The eight-ton AMS detector was developed and built by a collaboration of hundreds of researchers and engineers from 16 countries. On May 16, 2011, the space shuttle Endeavor brought it to the international space station, where it was installed on the far side on May 19. Since then, the spectrometer's strong magnets and particle traps have been capturing high-energy particles from the cosmic rays that hit the detector. The main focus of the measurements is on antimatter particles.