Are you overweight or underweight

What does too fat mean here?

Around every second German is considered too fat. But are a few extra pounds really that harmful? And who actually determines what is normal, fat or thin? 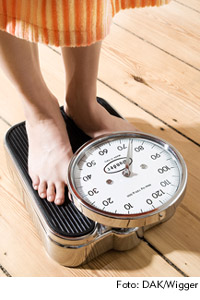 American scientists explain Obesity happy to be the number one cause of death. It is said that more US citizens die from being overweight and obese than from cigarette smoke. But if you take a closer look at the numbers, you will see that the equation “thick equals shorter life expectancy” does not work out. On the contrary: Those who weigh just a few pounds too much, i.e. have a Body Mass Index (BMI) between 25 and 29, can even expect a longer life than so-called normal-weight people. Older people in particular benefit from a few extra pounds. Apparently, the risk of dying of cardiovascular diseases or cancer does not increase until they are clearly obese.

Weight according to formula

Since the mid-1990s, the Body mass index used to assess body weight. With this key figure for the ratio of weight to height, adults are divided into under, normal, overweight or obese. The formula solved the one that was valid until then Broca index from. The BMI was developed 150 years ago, but it was only pulled out of the drawer by the World Health Organization around twenty years ago. The author of the formula is the Belgian mathematician and astronomer Adolphe Quetelet (1796-1874). For him, it wasn't about identifying overweight people, but rather he wanted to develop a formula for an average person for statistical purposes.

Over the years, various groups of experts have decided in so-called consensus conferences from which BMI someone is classified as overweight or underweight. While an index up to 27 was initially considered acceptable, the WHO lowered the value for normal weight to an average of 24.9 at the end of the 1990s. A range between 20 and 24.9 is ideal for men, and between 18.5 and 24 for women. Anyone who reaches an index of 25 or more has since been considered overweight. This assessment caused the number of overweight people to skyrocket, so that the WHO has been speaking of a global epidemic since then. With increasing BMI in the population, the WHO determined different degrees of obesity (see Table 1). But the classification is controversial. Since there are no uniform and unambiguous data, the determination of overweight is ultimately only based on estimates and projections.
The Body mass index is calculated from the body weight in kilograms divided by the square of the body height in meters: BMI = kg / m2

While overweight in adults is determined uniformly via the BMI, no fixed values ​​can be given for children and adolescents. Because here the body composition changes so much through growth and puberty that age and gender have to be taken into account. To determine whether a child is overweight or obese, paediatricians therefore relate the BMI to age- and gender-specific reference values, which are divided into percentiles. For example, a BMI at the 90th percentile means that 90 percent of children of the same age and gender are lighter than the child in question. Above the 90th percentile, children are considered overweight, above the 97th percentile as obese.

BMI is just a guide

The BMI formula is so handy and easy to calculate that many publications and statistical surveys ignore the fact that the BMI only provides one of several points of reference for assessing body weight. In order to determine whether someone is really carrying too many pounds with them, additional parameters must be used. One of the most important is the percentage of adipose tissue in the body. For example, competitive athletes with a lot of muscle mass can quickly exceed a BMI of 25 without anyone describing them as overweight. With very small and very large people, the formula also reaches its limits and becomes imprecise. For short people with a normal figure, the index tends to give too low values ​​and for very tall people too high. For Asians with their small, rather light physique, different classifications should therefore apply than for, for example, strongly built African-Americans. The distribution of the fat also plays a decisive role. The risk of cardiovascular diseases and diabetes is higher if the fat cells settle on the stomach, as is the case with the so-called apple types. Fat pads on the hips and thighs, such as those found in pear types, are less of a problem. Because the fat cells on the stomach are much more metabolically active and release more fatty acids or messenger substances that can increase the risk of heart attack and diabetes. Women with cushions on their hips often feel too fat, but from a medical point of view they are not particularly at risk. To determine the fat distribution, the waist circumference is measured. If the circumference is more than 102 cm in men and more than 88 cm in women, it is called an apple type with an unfavorable abdominal fat distribution.

Tab. 1: WHO classification of the Body Mass Index (BMI)

Age should also not be neglected when assessing weight. Because over the course of life, most people gain weight slightly but steadily until the end of their sixth decade. One reason for this is that the body's muscle mass decreases with age and the percentage of fat increases. This reduces the energy requirement. Because muscles require a relatively large amount of energy, fat cells, on the other hand, burn only a little. Accordingly, a person over the age of 50 consumes around 200-300 calories less than a young person. Since eating habits usually do not change with age, a few extra pounds can quickly accumulate. In addition, the decrease in body length with increasing age leads to higher BMI values. In 70-year-old men, this increases the BMI by an average of 0.7 points, and in women by even 1.6. This age-related increase must not be misinterpreted as a harmful weight gain. It is possible that higher weight even has a biological meaning in old age. Various studies have found that a few extra pounds on the ribs is quite good for older people. For example, 60 to 69 year old men had the highest life expectancy if they had a BMI of 26; for women of the same age group, a BMI of just over 27 was found to be favorable. When long-term illnesses or a lack of appetite occur in old age, seniors with more abundant resources can better draw on their reserves. The national research institute of the USA therefore recommended a BMI classification that takes age into account as early as 1989 (see Tab. 2).
If one uses the age-related classification of the BMI, the numbers on overweight in Germany look much less dramatic than before. Then significantly less than 66 percent of all men and 50 percent of all women are classified as too fat. Nevertheless, on average every fifth adult in Germany is obese with a BMI of over 30. Over the past 20 years, however, the proportion of adult obese people has risen only slightly. Such number games may be insignificant to the individual, but they have far-reaching economic consequences. Because the greater the number of overweight people, the more anti-fat pills and formulas are sold.

Not everyone has to lose weight

In contrast to being slightly overweight, obesity has been shown to be harmful to health. The list of diseases that are favored or even caused by obesity ranges from type 2 diabetes to disorders of lipid metabolism, high blood pressure, joint problems and certain types of cancer. But when exactly the risk of cardiovascular diseases, cancer and other increases is something scientists are unclear about. Apparently only a BMI of over 30 leads to significant damage to health. On the other hand, it is uncertain whether being moderately overweight with a BMI of 25 to 30 triggers weight-related damage at all. Different studies come to very different results. Individual factors such as disposition, lifestyle, health behavior and age probably have a major influence here. A sportily active woman with a BMI of 30 who eats sensibly has a lower risk of disease than an inactive smoker with a BMI of 20. General statements that every kilo too much means a creeping health risk are therefore simply wrong. Instead of looking solely at weight, it is better to look at a person's overall living conditions.
It's not about playing down the issue of obesity. Scare tactics or even the hottest city, as is customary in the USA, will not get us any further. Stomach reduction, liposuction and diet addiction are not least excesses of an exaggerated fear of being overweight. If you keep a factual view and above all correctly classify a moderate increase in weight in old age, the subject of obesity will be much fairer.

All articles about obesity ...