How harmful are cigars compared to cigarettes

Does cigar smoking have any consequences? Are cigars really that harmful?

Smoking a cigar - a symbol of pleasure?

Cigars originally come from South America and came to Europe through colonization in the 18th century, where they became an important industry in the 19th century. Nowadays, cigars from South America are still considered to be of particularly high quality. They usually consist of different types of tobacco and contain whole or crushed tobacco leaves.
In contrast to smoking cigarettes, cigar smoking takes more time. The cigar must be cut, lit and consumed correctly so that it develops its "taste" and does not go out. It is likely that this expenditure of time is often confused with enjoyment. Because every form of tobacco consumption reduces your taste perception and thus ensures that you can no longer properly perceive other tastes and smells. However, smoking cigars has consequences that are far worse than changes in taste.

How Much Nicotine is in a Cigar?

Unlike cigarettes and cigarillos, cigars are smoked for a very long time, have a larger diameter and a significantly higher nicotine content.

The cigar as a status symbol?

Unlike a cigarette, a cigar is traditionally handcrafted and therefore significantly more expensive. Those who can afford to consume cigars on a regular basis often want to use it to say something about their social status. Furthermore, the knowledge of the numerous types of cigars and the mastery of the correct consumption technology convey a certain elitist feeling for people who like to be the center of attention. Therefore, men in particular still smoke cigars and thus ignore the consequences of cigar smoking.
But smoking cigars is harmful and so the cigar consumer also says something about his understanding of health. Statistically, people with a high level of education smoke significantly less because they know how unhealthy it is to smoke cigars or cigarettes. In addition, the status character of the cigar is more historical than smoking was reserved for the upper class. There are now also industrially manufactured cigars that have nothing to do with high-quality enjoyment for that very reason.

Smoking a cigar as a stimulant?

How does the smoke come about when smoking a cigar?

Burning tobacco creates smoke that enters the mouth through inhalation. In addition to the smoke, other vapors, gases and solids are inhaled, which together result in a mixture of over 9,000 individual substances, of which at least 69 have already been identified as carcinogenic. The best-known pollutant is probably nicotine, which causes withdrawal symptoms in dependent smokers through nicotine withdrawal. This is found in every tobacco product. There are therefore no cigars without nicotine. The amount of smoke emitted when smoking cigars is often considered to be particularly desirable. However, this only means even greater damage.

Effect of the cigar: from headaches to nicotine flashes

Do you really want to smoke a cigar? However, you have to accept consequences such as nausea, diarrhea or dizziness. Some smokers also get headaches from the heavy smoke from the cigar. By smoking the cigar, you ingest a large amount of nicotine, which in the worst case can lead to a “nicotine flash” or nicotine poisoning. This shows again how harmful cigar smoking actually is and that it has nothing to do with pleasure. Or would you "enjoy" food if you get stomach upsets and diarrhea from it? You can see how contradictory it is when smokers vomit or worse for "enjoying" a cigar.

Can you smoke a cigar on your lungs?

Smoking a cigar on your lungs is very dangerous. As a result, you ingest a very high amount of nicotine and symptoms of poisoning can occur. It's also very gross and you will have a coughing fit. Even “experts” do not smoke cigars “on their lungs”. You only breathe the smoke in and out of your mouth without breathing in air again. As a result, less smoke gets into the lungs, which has led cigar fans to believe that this will not cause any harmful effects on the lungs. However, this has been clearly refuted in scientific studies. Because even without active inhalation, some of the smoke gets into the lungs. In addition, the cigar smoke that is kept in the mouth damages the throat, larynx, mucous membranes, tongue and gums.

In scientific studies, the risk of developing lung cancer in cigarillo or cigar smokers was on average 9 times higher than in non-smokers. Those smokers who did not inhale the smoke, but only kept it in their mouth, increased their risk of illness 5 times, those who smoked on their lungs even 28 times!
For comparison: cigarette smoking increases the risk of lung cancer by 9 times, pipe smoking about 8 times. So it depends a lot on how the cigar smoke is consumed. In any case, it is not harmless. The reason why the risk of cigar smoking is on average lower than with cigarettes is probably due to the fact that, despite the increased nicotine concentration, cigars are consumed less often than cigarettes.
In addition, lung cancer is far from the only health risk posed by cigars and other tobacco products. Above all, cigar smoke increases the risk of cancer in the mouth and throat area even more than cigarettes because it remains in the mouth for longer. This increases the risk of dying from larynx or esophageal cancer compared to a non-smoker by 4 to 10 times.
Nicotine can continue to enter the body and bloodstream through the mucous membranes and saliva and thus increase the risk of liver, bladder, or pancreatic cancer, to name just a few. Nicotine addiction is also possible. Therefore smoking cigars poses neither a higher nor a lower risk than cigarettes. However, the nature of the damage can shift. In any case, smoking cigars has consequences. 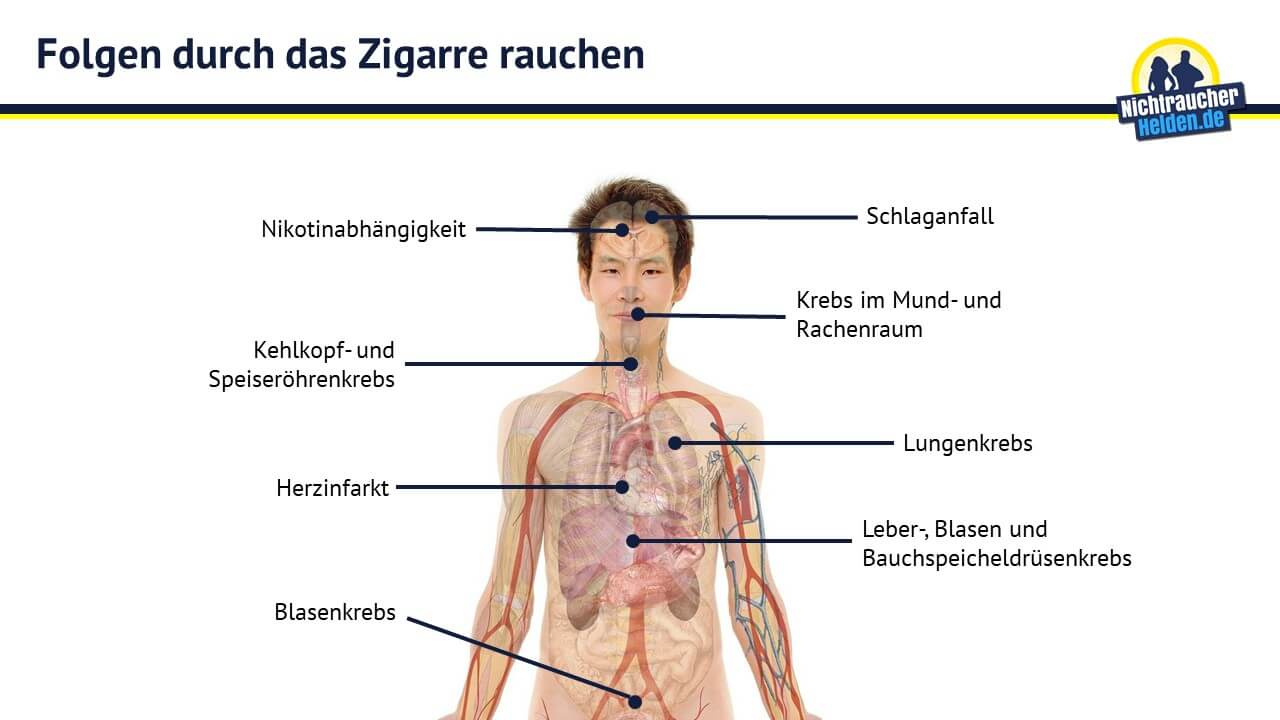 As you can see, even "just" one cigar a day is harmful. So it doesn't matter how many cigars you smoke - even one cigar a week is by no means healthy. All tobacco consumption is harmful and not without consequences.

What is the trend in tobacco products?

While cigarette consumption is falling worldwide, the general consumption of tobacco-containing products is increasing. The reason for this may be novel consumption methods such as the e-cigarette. Worldwide sales of cigars have remained largely constant in recent years, but sales have increased and will likely continue to rise. This could be due, among other things, to the fact that cigar smokers smoke less and are willing to spend more on each consumption.

Conclusion - how healthy is smoking a cigar?

Not at all! Smoking cigars is by no means any less harmful than cigarette smoking and poses an equally high risk of many diseases - especially if the smoke is inhaled. Compared to cigarette smoking, only other damage such as mouth and throat cancer are to be expected. Quitting smoking is and will remain the only healthy solution. The easiest and most sustainable way to stop smoking is with professional help. Our certified online non-smoking course can help you with this.