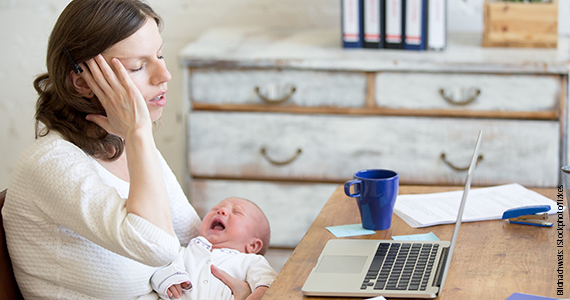 05/24/18 (ams). What are we doing wrong? Isn't our baby healthy? And how are we supposed to hold out? If their baby is crying all the time, it's not just a big worry for parents. Self-doubt, feelings of guilt and the constant roaring are also on your nerves. Anja Debrodt, a doctor in the AOK Federal Association, gives advice on what can be helpful in this stressful life situation. Babies usually express their needs through screams - whether they are hungry, need to be diapered, or are tired. However, some babies cry a lot and are difficult to calm down. According to the German Society for Child and Adolescent Medicine, around every eighth to tenth baby is a so-called cry baby. "One speaks of a crying baby if the child cries more than three hours a day on more than three days for more than three weeks," explains doctor Debrodt. Excessive crying often begins after the second week of life and reaches a peak around the sixth week of life The little ones cry especially in the afternoons and early evenings - with clenched hands, tucked legs and flushed faces. Because babies always have hard tummies, it was previously thought that the crying was due to flatulence. Hence that now obsolete term "three-month colic". In fact, gastrointestinal problems can be the trigger for the crying, albeit rarely, because the digestive system is not yet mature. But most of the time it is the other way around: the stomach puffs up because the baby cries swallowed so much air.

Ready-to-broadcast radio interview with Anja Debrodt, a doctor in the AOK Federal Association

Today, the cause of the excessive roar is assumed to be a regulatory disorder. The child has more difficulty adjusting to the rhythm of sleeping and being awake than others. It reacts very sensitively to all perceived stimuli and hardly finds sleep. As a result, they are chronically overtired, more easily irritated as a result and scream even more. For the parents this is pure stress. You try everything, but it doesn't help. You feel powerless, helpless at the mercy of the situation. After a while, many mothers are deeply exhausted and at risk of developing depression.

"Parents have to make it clear that they are not to blame," emphasizes doctor Debrodt. "The baby was born with this increased irritability." But despair and even anger can become so great that control is lost and the mother or father shakes the child. However, this can quickly have serious consequences for the baby. There is a risk of what is known as shaking trauma because it cannot hold its head yet. If screaming becomes unbearable for the mother or father, it is best to put the baby in a safe place, leave the room, and take a deep breath. Such situations are a signal that it is high time to see a pediatrician for advice. The doctor can clarify possible organic causes such as milk intolerance, an inguinal hernia, a misalignment of the spine or an otitis media. Parents should also seek help from a pediatrician if the child no longer gains weight, does not drink, spits a lot and shows expressions of pain or increasingly overstretched the back. This also applies if the screaming has not yet occurred at the age of six months. The most important rule for annoyed parents is, even if this is very difficult to implement: stay calm. Because stress and restlessness are transferred to the child and the situation continues to rock. This also means avoiding external unrest in everyday life as much as possible. This includes, for example, few visits, little television, no exciting activities and a fixed daily routine. Even if it is understandable that mum and dad try everything possible to calm the child: "Parents shouldn't constantly switch from one calming method to the other, it creates a hectic pace and frustration for both sides," advises Debrodt. A sedative has actually proven effective in studies: Carrying the child around more - when they are calm. Stressed parents shouldn't be afraid to take some relief. In addition to the pediatrician, contact points can be advice centers specifically for parents and small children or so-called crying clinics. In the meantime, there is also so-called early help in all communities, for example a family midwife who can support the young family in the first year of the baby's life. The local youth and health department provides information on this. A self-help group and thus contact with other affected parents can also be helpful. It is also important to ask friends or family members for support so that you can take a break from time to time. A consolation for all troubled parents: The screaming stops with the first burst of maturation - usually by the fourth, at the latest by the sixth month of life. And in the vast majority of cases, completely healthy children develop from the baby cribs.