What are the Biggest Myths About Obesity

Myth refuted: Up until now it has been debated whether being slightly overweight is actually healthier than being slightly underweight - at least for the heart and circulation. Now, however, a study refutes this myth of the “healthy fat”. According to this, the risk of cardiovascular diseases increases even at the upper limit of normal weight and then increases with every kilogram. Contrary to previous assumptions, however, a few pounds too little does not seem to do any harm, as the researchers report.

Which body weight is optimal for our health? Scientists have been arguing about this question for years. It seems clear that being very overweight or even obese are unhealthy. They increase the risk of cardiovascular diseases, strokes and cancer and can even make our brains older and change our genetic make-up. Doctors are therefore concerned about the increasing proportion of overweight people around the world.

But when do the negative consequences of being overweight begin - and are too many pounds really always harmful? This is exactly what there has been doubts about: “There is a lot of evidence to support the so-called obesity paradox,” explain Stamatina Iliodromiti from the University of Glasgow and her colleagues. "This says that being overweight and even obese can even protect against cardiovascular diseases - especially in older people with previous illnesses."

In addition, some studies have shown that a body mass index of less than 20 - which corresponds to a low normal weight - even appears to be harmful. Accordingly, particularly thin people also have an increased risk of cardiovascular disease, cancer and premature death. “The reasons for this paradoxical result remained unknown,” explain the researchers. Because actually this contradicts everything that is known about the physiological relationships between body fat and health.

The middle is optimal

Now Iliodromiti and her colleagues have thoroughly reviewed the obesity paradox. With almost 300,000 participants in a long-term study, they evaluated the body mass index, body fat percentage, hip and waist circumference and the incidence of cardiovascular diseases over a five-year period. All participating men and women were healthy at the start of the study and were between 40 and 69 years old.

The result: the participants remained the healthiest with a body mass index of 22-23. At least in terms of cardiovascular diseases, the middle of the normal weight BMI range of 20 to 25 seems to be optimal. A body fat percentage of a maximum of 30 percent in women and 18 percent in men also had a positive effect, as the researchers report. 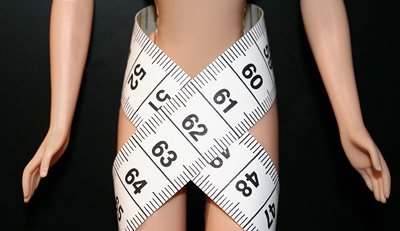 The waist circumference reveals the risk of illness © SXC

Every kilo more can hurt

The study also shows that if body weight and body fat increase above this mean, the risk of cardiovascular disease increases with every pound. If the BMI increases by 5.2 points for women and 4.3 for men, this increases the risk by 13 percent, as the researchers found. Even slightly overweight can therefore have a negative effect - at least on the heart and blood vessels. The myth of healthy fat people seems to be refuted in this respect, at least.

The evaluations also confirm that the fat in the middle of the body in particular can be harmful to health. For example, if a woman's waist circumference increases by 12.6 centimeters, cardiovascular disease is 16 percent more likely. In men, it is around ten percent at eleven centimeters, as the scientists report.

But the bottom line: the study data refute the overweight paradox. It is true that the overall results initially seemed to indicate an increase in cardiovascular risk for BMIs below 18. But when the researchers excluded smokers and people with additional risk factors, that increase disappeared. In the case of the overweight participants, however, it was retained.

"These observations indicate that the previously documented negative effects of a low BMI on the heart and circulation are due to confounding variables," says Iliodromiti. "Our study thus provides evidence against the obesity paradox - as the largest study of its kind to date." According to the researchers, there is no longer any reason to propagate obesity as supposedly healthier.

Normal weight is best - at least for most

"The slimmer a person is, the lower their risk of cardiovascular disease," emphasizes Iliodromiti. “So the message is that healthy people should try to stay slim as possible. Every kilogram less improves heart health. ”However, that does not mean that underweight is desirable. Because this in turn has other negative health consequences.

However, some people might benefit from a few pounds too much. Because the new values ​​only apply to healthy people. “It could look different for people with pre-existing conditions,” says Iliodromiti. “Because there is evidence that, for example, slightly overweight cancer patients have a lower cardiovascular risk. In addition, these patients usually lose weight anyway due to the cancer and the therapy. "(European Heart Journal, 2018; doi: 10.1093 / eurheartj / ehy057)