This is how raw foodists eat

What do raw foodists eat?

Actually allowed Raw foodists like the Berlin trainee Michael Taube (24) only eat food that has not been heated to more than 40 degrees. Otherwise they are considered “cooked to death”, that is, free of important vitamins or enzymes. Michael Taube therefore mostly only eats raw fruit or vegetables. Potatoes, rice or legumes are not one of them - after all, these foods cannot be eaten uncooked. Michael Taube avoids processed finished products anyway: "If you eat" fake food ", you become a fake yourself." Instead, he drinks a smoothie made of cabbage, fruit, salad or herbs in the morning; Spread throughout the day there are tomatoes, cucumbers, celery, bananas or figs. The budding educator is convinced that this is the healthiest way to live.

To explain why raw food is healthier from his point of view, Taube picks up an apple: “If you eat the apple raw, a tree could still grow out of the seeds. But if you put the apple in the oven, everything is dead in the end. ”The cooking process would destroy important vitamins or enzymes. That's why raw foodist Michael Taube heats his food to a maximum of 40 degrees. Strictly speaking, he should also eat meat - as long as he doesn't heat it. But Michael Taube is a vegan raw foodist. Like many people who later despised meat, Michael Taube had a key experience that made him a vegan: when he was 19, his uncle asked him if he could help him slaughter rabbits. Michael Taube still remembers how his uncle hit the rabbit with a club on the head, cut the throat and bleeded it to death. After the animal was cut up, Michael Taube could not sleep for days. He became a vegan, only to become a raw foodist a short time later. 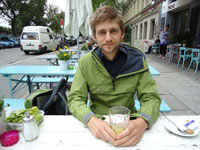 When it comes to raw vegetables, Michael Taube only occasionally makes an exception: when he wants to eat quinoa or buckwheat, he sometimes brings it to a boil, even if a lot of nutrients are lost in the process. “Maybe I'm not a hundred percent raw foodist yet,” says Taube. However, he does not eat the grain until it is cold again.

How many raw foodists are there?

Even with the raw foodists, it is not possible to say exactly how many there really are. From his research on raw foodists, the nutritionist Claus Leitzmann concludes that there are only a few thousand. The reason: the more restricted the form of nutrition, the fewer followers it finds.

What do nutritionists say about raw foodists?

In 1998 Prof. Leitzmann published the most comprehensive study on raw foodists to date. The authors questioned more than 570 raw foodists about their eating habits, about 200 of them were examined afterwards. Most of the study participants were underweight. It became particularly critical when it came to the supply of vitamins D, B2, B12 and niacin. In addition, many raw foodists lacked the minerals zinc, calcium and iodine. The result of the scientists: a pure raw food diet is not recommended. Especially not for pregnant women, breastfeeding women, children or the elderly. And here at the latest the problem with the one-sided diet is there again: Too much meat can make you sick in the long run, but too vegan a lifestyle if you don't prepare for it properly. Expert Leitzmann's conclusion: "As a lacto-ovo vegetarian, you actually live the healthiest." (Wil)