Is the temperature defined in a vacuum

What is the temperature of the universe?

The answer to this question depends a lot on where you are in space. The temperature of the "empty" room can be changed with minus 270 degrees Indicate Celsius.

In everyday life, i.e. under terrestrial conditions, our understanding of temperature is linked to how warm or cold we feel something. Water at 70 degrees would feel much hotter than air at the same temperature. Only a thermometer creates certainty - based on the physical definition of temperature. It looks at the average kinetic energy of microscopic particles that are in a solid, a liquid or a gas and assigns a temperature to this energy.

The particles in the water or in the air constantly collide and thus have roughly the same energy. This state is called thermal equilibrium. The mercury in a thermometer also absorbs energy through such microscopic impacts, which brings it into thermal equilibrium with its surroundings. In this case, it expands due to the heating and shows the temperature of 70 degrees Celsius on a calibrated scale.

The reason why we perceive temperatures differently is the lower density of the air. It contains fewer particles and therefore less energy - even if the individual particles have the same speed and therefore kinetic energy as those in the water.

For astronomers, however, the earth's atmosphere is still very dense compared to space. Even here in the solar system there are so few particles between the planets that they almost never collide with one another. So there is no thermal equilibrium between them.

This becomes clear, for example, in the particles of the solar wind, which also shoot past the earth. Their energies correspond to the temperature of the solar corona - a remarkable one million degrees - but an astronaut in near-Earth space would still freeze to death because the few particles transmit too little energy to warm him up. It would look different if it were on the sunny side of Mercury: The direct thermal radiation of our central star heats the planet to 470 degrees Celsius, whereas on its night side the astronaut would have to shiver at minus 180 degrees Celsius.

Far away from stars and galaxies, in the middle of intergalactic space, there are even fewer particles of matter to be found. The density of matter there is about one hydrogen atom per cubic meter. On earth, the same volume counts as a vacuum with several billion particles. The intergalactic space comes very close to a perfect vacuum. No particles - so no temperature?

Even if there were no matter, electromagnetic radiation still penetrates the entire room. This does not mean the radiation from stars, but the cosmic background radiation. It dates from around 400,000 years after the Big Bang, when the first atoms were formed. The light quanta that previously scattered on the unbound electrons could now spread unhindered in space. As a relic of the Big Bang, they still populate the entire universe with a density of around 400 particles per cubic centimeter. 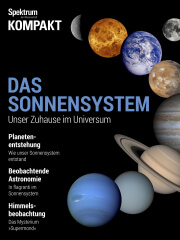 The history of our solar system began about 4.6 billion years ago in a disk of gas and dust. Thanks to modern technology, we have only been able to explore our neighborhood for a few decades: the other planets, their companions and the sun itself.

Scientists today receive radiation in the microwave range. By determining its energy, it can also be assigned a temperature. This is only three degrees above absolute zero minus 273 degrees Celsius. In intergalactic space, far away from other celestial objects, the few particles come into thermal equilibrium with this background radiation. A temperature of minus 270 degrees Celsius can thus be assigned to the universe - apart from local disturbances from stars or other radiation sources.

And assuming that researchers could create a particle-free and radiation-free space, a perfect vacuum would still not be achieved. The strange excesses of quantum mechanics are responsible for this. After that, even at absolute zero - which can practically never be reached - particle-antiparticle pairs are constantly formed in utter nothingness, which immediately annihilate each other again. These quantum fluctuations show that the absolutely empty space has energy - the vacuum energy. So theoretically a temperature could also be determined here.