Why is the US dollar so high

Why the US dollar is still so strong 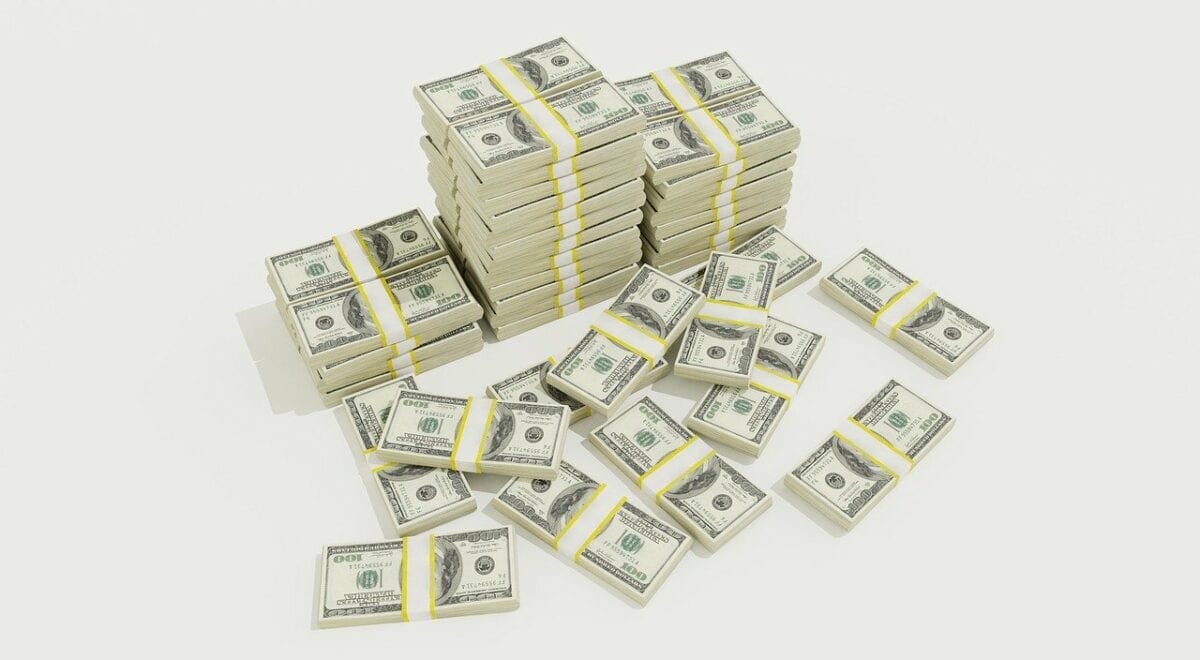 For the US, things are getting rock solid: a collapsing economy, imploding interest rates, exploding money supply and national debt that is getting out of hand. However, the US dollar has so far been unaffected by these burdens. A look at the problems of other currency areas and the special position of the “greenback” in the world currency system explain this phenomenon.

Dramatic changes in the fundamentals for the US dollar

Until the beginning of February, interest rates for the US dollar were well above the level of the other major currencies such as the yen, the euro and the pound. But the dollar lost this interest rate advantage almost completely within a very short time due to two extraordinary rate cuts by the US Federal Reserve (Fed) on March 3 and 15. A month earlier, one-year US government bonds still offered an interest rate of 1.4 percent, currently it is just 0.14 percent. As a result, the interest rate advantage compared to the euro has shrunk by almost two thirds.

At the same time, the economic forecasts for the USA collapse massively, while at the same time unemployment figures rise as sharply as they did not during the Great Depression. The rate is set to soar up to 30 percent this year. Other industrialized countries do not have to fear such devastating numbers thanks to their closer-knit social safety nets. The federal government in Washington is trying to limit the economic and social damage with unprecedented aid programs on credit. As a result, the national debt ratio will rise from currently 105 to over 120 percent of US GDP by the end of the current fiscal year. The debt frenzy is being financed by the Fed, which now buys unlimited bonds and lends directly to companies and households via the US banking system. As a result, the Federal Reserve's balance sheet inflated by $ 1.1 trillion at a record pace within a month to March 25, 2020. This is the largest and fastest act of money creation in the Fed's 106-year history. The US dollar money supply M1 rose last year by 11.8 percent.

The economic drama in the US is only just beginning. It could get a lot worse; For example, if the enormous US credit bubble starts to burst now, which will not be seen until later in the year. The exchange rate of the US dollar to the other main currencies has so far been unaffected by all of these developments and, as measured by the US dollar index, is almost three percent above the level of the first emergency rate cut on March 3rd. What are the reasons for this dollar strength? 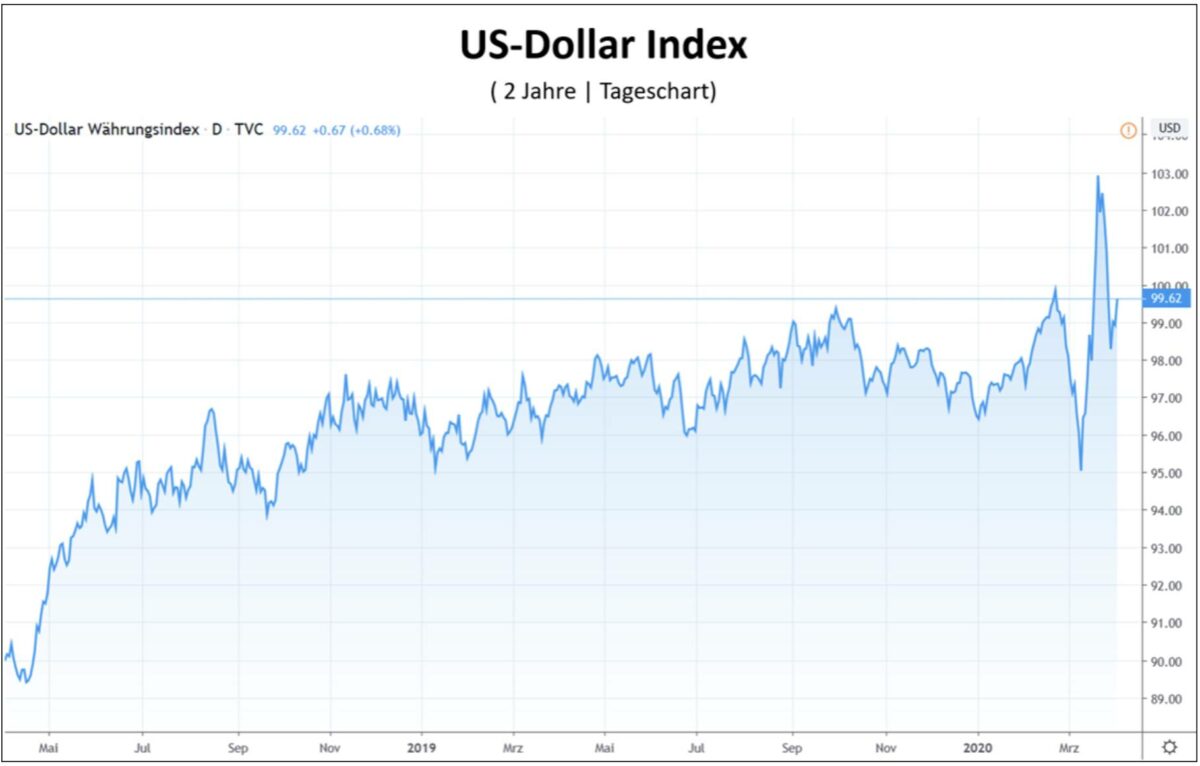 As early as 1971, shortly after the US dollar was separated from gold, the then US Treasury Secretary, John Conally, coined the saying: "The dollar is our currency, but your problem". At that time this statement was aimed at the devaluation of the dollar, today it is the opposite. Because countries like Argentina, Brazil or Turkey have borrowed massively in US dollars. By December 2015, as a result of the financial crisis, dollar interest rates also remained close to zero and the greenback depreciated. It was therefore attractive for citizens and companies in many emerging countries to borrow in US dollars, as interest rates were significantly higher in their own country and the weakness of the dollar almost automatically reduced some of the loans. Since the US dollar has appreciated again, this calculation has turned into the opposite - the debt burden in the Argentine peso, Turkish lira and Brazilian real is now appreciating sharply. This brought the countries mentioned and their currencies into difficulties even before the Corona crisis. Argentina was de facto bankrupt at the end of February. 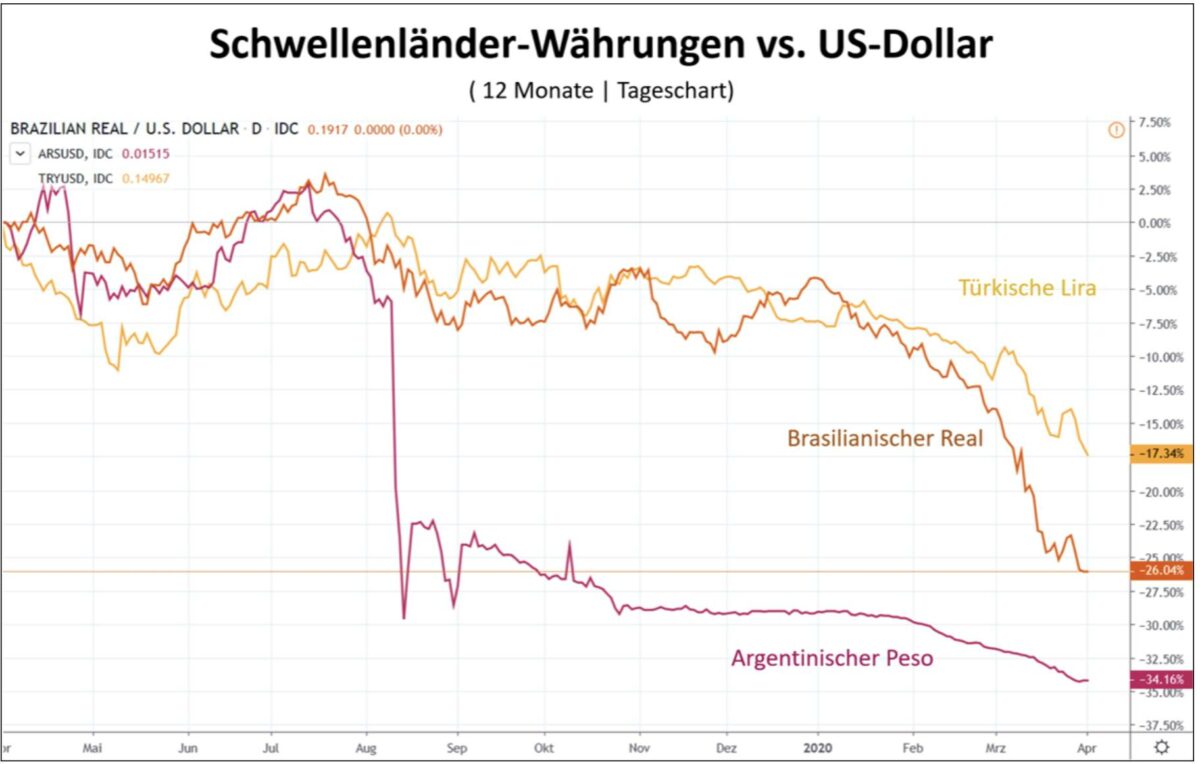 But now the situation threatens to escalate completely and the dollar debtors in the emerging countries, whose currencies continue to depreciate, are coming under pressure from all sides. The corona virus has long since reached South America and the Bosporus. The economic consequences are now placing an additional burden on the highly indebted economies. There is therefore a lack of US dollars everywhere to make interest and principal payments. The dollar reserves of the central banks in the affected countries have melted dramatically. This emergency led to a downright panic about buying the US dollar in mid-March. In the meantime, the situation has eased somewhat, as the US Federal Reserve grants all central banks worldwide access to their dollar swap transactions and even accepts US government bonds in the hands of foreign central banks in exchange for US dollars via repo transactions these do not have to be sold, which would otherwise cause the foreign exchange reserves of the emerging countries to melt even more quickly.

But other emerging market currencies, such as the Hungarian forint or the Russian ruble, are also suffering from the corona crisis.
Among the main currencies, the Japanese yen is still holding up best against the US dollar, even though interest rates in the Land of the Rising Sun are significantly lower than in the USA and the national debt is more than 237.7 percent based on GDP is twice as high. But the yen is an exception in the currency markets.
Comparison with the Japanese yen

Although Japan still has the highest debt in the world ahead of Greece, the country's currency is a “safe haven” and can even gain in value against the world's reserve currency in times of crisis. And that even though no other central bank in the world created and spent as much money in comparison to the gross domestic product as the Bank of Japan. It even finances Japan's entire national deficit using a digital printing press and buys not only domestic government bonds, stocks and REITs, but also bonds from other countries, such as B. the USA. 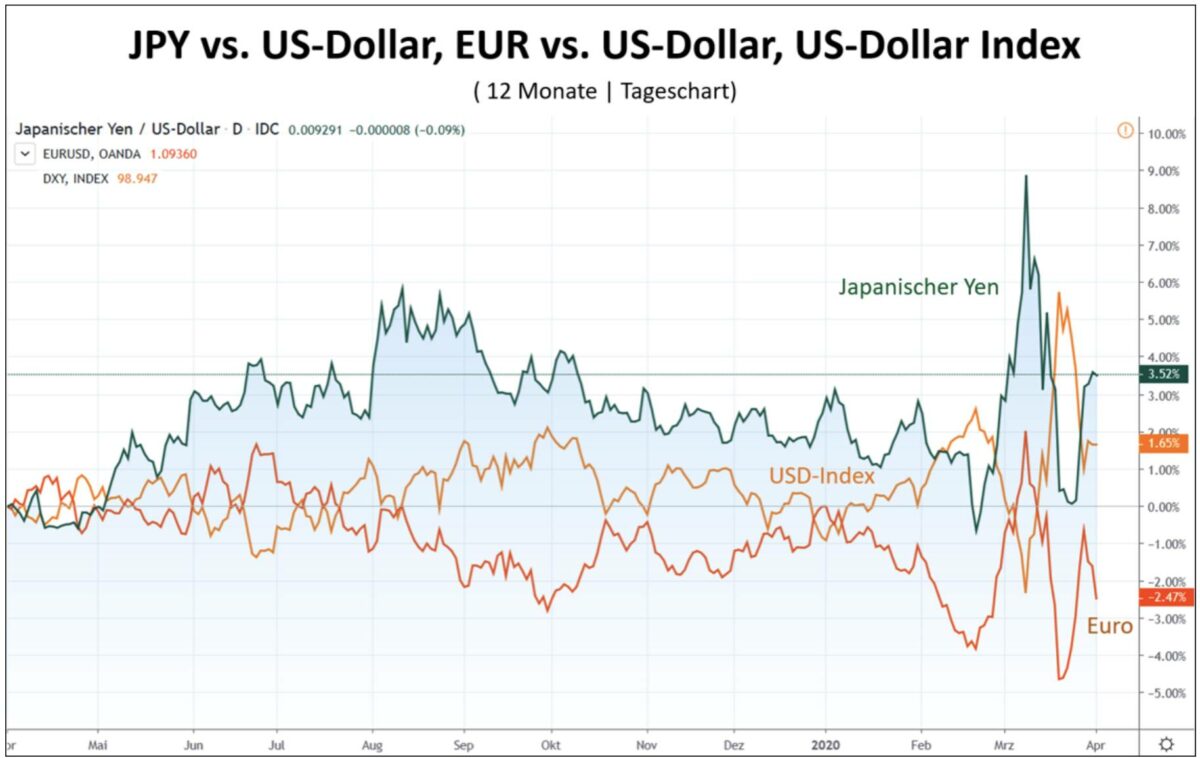 But why is the yen so popular right now? The reason for this are so-called repatriations of funds invested abroad back to Japan. These funds had previously fled the yen when it became foreseeable in 2012 that Shinzo Abe would become the country's new prime minister. Shinzō Abe had announced radical action against deflation in the country by starting the money press and permanently abolishing interest. He himself appointed the head of the central bank responsible for this.

Please click here to read part 2 of the article