Why is water hot or cold

It is somehow clear that you make tea or coffee with boiling water, but why not do the same with soup? Vegetables, on the other hand, should be put in boiling water, but are sometimes come out after a few minutes and quenched in ice-cold water ...

Sounds pretty complicated, but it isn't if you are aware of a simple rule.

If you want to extract the flavor from an ingredient, you (almost) always prepare it with cold water. There is no special reason for this, except that the flavors are already dissolved while the water is warming up. Normally, you don't turn the hob on full power for this, but let the whole thing take place over medium heat so that you can turn the heat down again in good time when it starts to boil. 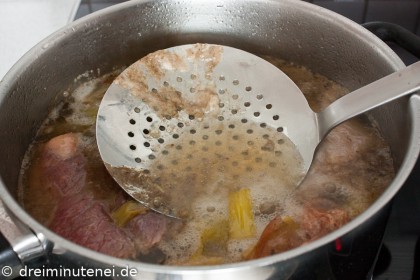 In addition, loose protein particles start to coagulate at around 70ºC, rise, and you can skim off the foam that forms. They would dissolve in boiling water, but the violent bubbles do not form such a compact foam. So they would be harder to remove.

If, on the other hand, you want to cook the ingredient in such a way that as little taste as possible goes into the water, you can use boiling water. The ingredients then get hot (and cooked through) faster and lose less flavor.

So if you Vegetable broth If you want to cook, you prepare the ingredients with cold water, let them slowly get hot and simmer them until all the flavors are dissolved in the water. You throw away the resulting vegetable slush.

But if you use vegetables as Deposit If you want to cook in the soup, you cut it up and throw it in boiling water so that it boils as briefly as possible, stays crisp and loses as little taste as possible.

No rule without exception

Smarters will now say that when you have tea or coffee you also want the flavors to be dissolved in the water, but pour boiling water over both. That's right, and for one reason only: by the time the water boils, if you make tea with cold water, so many undesirable flavors have been dissolved that it becomes inedible. The same applies to coffee - although there are also preparation methods with cold water, e.g. Turkish mocha or Greek coffee.

But back to the vegetables. You want the broth to be hot, but sometimes you also need cold cooked vegetables, e.g. for salads. You don't just let it get cold when it's done, but dip it briefly in ice-cold water to stop the cooking process immediately. So it stays fresh and crisp and doesn't lose any color.

If you cook the vegetables even shorter, let them get hot for a short time and then put them off immediately, this is called "blanching". This is necessary for some ingredients in order to remove unwanted ingredients - beans, for example, should never be eaten raw, because they contain small amounts of harmful substances that are destroyed by the heat. Here, too, the point of cold water is to stop the heat immediately.