What are the diamond ring types

8 popular ring settings you should know

At the beginning there is the choice of the right ring model. First and foremost, your own taste sets the tone, but in many cases it is worthwhile not only to look at the exterior. Because every ring shape has its own advantages and disadvantages, which should be included in the decision. Some rings are particularly suitable as engagement rings, others better as wedding rings. Learn more…

The solitaire ring is available in different variations. Basically it consists of a ring band and a diamond, which is held by 3-6 claws ("claw or claw-like holding elements of a special gemstone setting" Wikipedia).

As the name of the ring suggests ("solitare", French for loner), the solitaire ring is characterized by the fact that it can only set a single stone. Usually a brilliant cut diamond. The single diamond symbolizes the only true love.

In the traditional form, the diamond is held by a total of six claws. The prong position has the advantage of hardly hiding anything of the diamond. Due to the incoming light, the diamond can optimally develop its luminosity (the fewer claws hold the diamond, the more light).

Three prongs clearly reveal more of the diamond, but they don't hold the diamond as securely as holding a six prong.

The ring band can be narrow or wide. A narrow ring band is particularly advantageous if you want to use the engagement ring as a clip-on ring after the wedding. Furthermore, a narrow ring band has the advantage of making the diamond appear larger than a diamond of the same size on a wider ring band (contrast effect)! Check it out for yourself:

The most common material used for solitaire rings is white gold. However, all other precious metals are also possible (you can find a comparison of the precious metals here).

Virtually all shapes and cuts are conceivable for diamonds. The most popular is the diamond.

Last but not least: Compared to other ring shapes, a decisive advantage of the solitaire ring is that the size can be changed very easily.

“Pave” means paving in English and pavé in French means paving stone. Like a cobblestone street, the pave ring is covered with small diamonds to the right and left along the ring band. 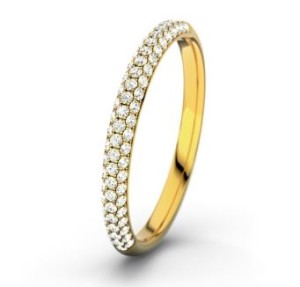 As with the solitaire ring, there is a larger diamond in the middle. Thanks to the many small diamonds, the pave ring shines particularly brightly.

Ideally, the pave ring consists of so many stones set close together that nothing of the actual ring band, the precious metal, can be seen and the impression arises that the ring is made up of diamonds. The individual small diamonds are held in small joints with mini claws.

Since the ring consists of many stones, the pave ring does not have to put so much emphasis on the individual diamonds. That means cheaper diamonds of inferior quality are also suitable, as they do not disturb the overall picture (unlike the solitaire ring, here the individual diamond is important).

There are mainly two variants of the Pave Ring. Typical are pave rings that are either set with diamonds all around (along the entire ring band) or halfway.

A disadvantage that results from a fully occupied Pave Ring is that it is relatively difficult to adjust the size afterwards. The more stones, the more difficult. In the worst case, the ring has to be completely redone.

Rings with side stones 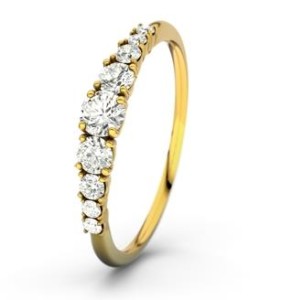 A ring with side stones usually consists of at least three stones. One main stone in the middle and two or more side stones.

In contrast to the Pave Ring, the side stones do not appear paved, but stand more for themselves than individual stones.

How many stones you choose is a matter of taste. In general, one can say that the more stones, the greater the general “blinking effect”.

As with other ring types, the following rule applies here: With small side stones, the main diamond appears larger.

As with most other ring shapes, almost all diamond cuts are possible with the ring with side stones. The diamond and princess cut are most often chosen.

A well-known variant of the ring with side stones is the three stone ring ... 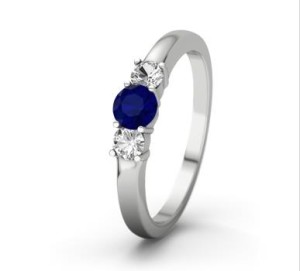 The three stones symbolize the past, present and future.

But it is also possible to purchase a three stone ring with three diamonds of the same size. With these rings, the general blinking effect is greater than with a ring with a single large diamond.

The three stone ring is rarely given away as an engagement ring. 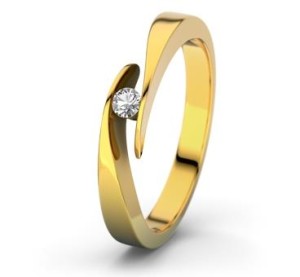 The tension ring is one of the simple ring models and, along with the solitaire ring, is one of the most popular engagement rings.

The tension ring can be described as a modern classic. No wonder, because the simple design is fascinating: the elasticity of the ring band alone holds a gemstone in the middle of the ring. There are clearly two advantages:

1. The first advantage is that there is less risk of getting caught while wearing the tension ring. For example, when putting on a sweater. This can happen quickly with a solitaire ring with the protruding ring head.

2. The second advantage is in the optics: With no other ring you have such a clear view of the diamond. This shows off the expensive diamond particularly well.

Contrary to the general assumption that the tension ring does not offer a secure hold for the diamond (the diamond can be lost quickly), it is one of the safest ring shapes available.

For an optimal hold, most jewelers notch two small hollows in the sides between which the diamond is clamped. This practically eliminates the risk of slipping.

However, no ring shape is 100% safe. If you choose a diamond, it can happen that the diamond splits due to pressure or very strong impacts. And a split diamond is, firstly, not beautiful and, secondly, falls out of its setting very easily.

But you can also protect yourself against this, because fortunately there is an alternative that is visually similar to the tension ring: the ring with a tension ring look.

The ring band of the engagement ring with tension ring look is not interrupted, in contrast to the normal tension ring. Only the precious metal that surrounds the diamond is removed. Thus, one has combined tension ring optics, safety and everyday suitability in one ring.

As a rule, rings with a clamping ring look are also a little cheaper than real clamping rings, as they are easier to manufacture.

Similar to the pave ring, it is also a lot more difficult to change the ring size with the tension ring. 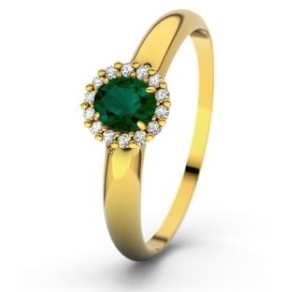 The haloring is not very well known in Germany, but very exclusive. The halo ring is named after a "halo" or halo. You can see why when you look at the ring from above:

The biggest advantage of the halo ring is a small optical illusion that makes the middle diamond appear much larger than it actually is. That can make a difference of up to 0.5 carats! 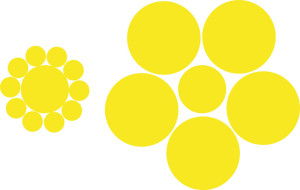 In fact, both circles are the same size! Our brain can be misdirected by environmental stimuli (the other circles), since the size assessment always automatically takes the environment into account.

This means that the objects are compared with one another. The same principle also works with halo rings.

The middle gemstone or diamond is usually round, but it is also possible to choose other shapes, e.g. B. an oval diamond.

If the ring band is not set with diamonds, it is relatively easy to change the size afterwards. 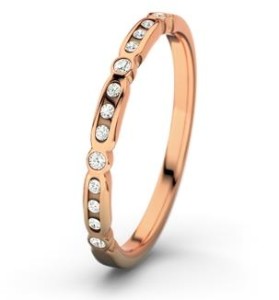 The memoire ring, also known as memory, alliance or eternity ring, is characterized by a ring band set with diamonds throughout.

That is why it is also known as the eternity ring, which means something like "ring of infinity". Because if the ring is completely set with precious stones, there is no end and no beginning.

In contrast to the pave ring, the memoire ring does not look paved, as only one diamond is lined up next to the next.

The memory ring was already in use in the 2nd century BC. Christ given away in ancient Egypt. At that time it was more common not to completely set the eternity ring with diamonds from the beginning, but only to allow three to five diamonds to be set.

Every single stone symbolized an important life event, such as a birth or a wedding.

For every further important life event, the ring was supplemented with another stone until the circle was closed.

The memoire ring is very comfortable to wear and is suitable for everyday use. Since the surface is relatively flat, there is no risk of getting caught.

If the memoire ring is set with diamonds all around, however, similar to the pave ring, changing the size is difficult and could be expensive.

The eternity ring is often given away as a wedding ring, less often as an engagement ring. 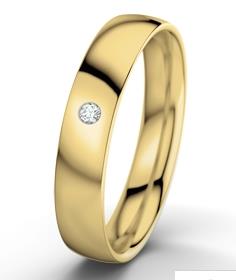 The band ring is the simplest of the engagement rings and is characterized above all by its high level of comfort and suitability for everyday use.

As the name suggests, the band ring consists of a continuous ring band. In contrast to the memoire ring, the band ring usually has a somewhat wide ring band. A wider ring band is well suited for more elaborate or longer engravings on the inside of the ring.

Like the eternity ring, the band ring is preferably given away as a wedding ring. If you like it very simple, you can choose the ring without any diamonds. If, on the other hand, you want to enhance it optically, you also have the option of buying a band ring with small, inserted diamonds.

The ring width of the band ring is either evenly wide or becomes wider / narrower at certain points. A typical variation would be, for example, to make the ring wider towards the top.

The band ring is particularly recommended if you work a lot with your hands.

This leads to a problem especially if you decide to continue to wear the engagement ring as a stackable ring in front of the wedding ring (i.e. wear both rings at the same time).

To counteract this problem, some jewelers offer so-called "wedding sets".

With wedding sets you buy optically coordinated engagement and wedding rings in one.

The two rings therefore complement each other perfectly. This can be advantageous not only visually, but also financially under certain circumstances.

If you are also in the UK market, you can check out this Ring Setting Guide.