What are the effects on accidents 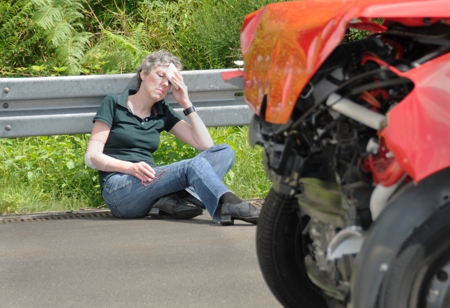 Physical injuries are primarily taken into account when assessing the severity of road accidents. Frequently, however, an accident also represents a psychological trauma. In particular, traffic accidents with serious personal injury can interrupt the previous continuity of life. The usual way of life, familiar role content and value systems, as well as life goal planning and the entire personal identity, can suddenly be called into question. Mental impairments as a result of road traffic accidents are still underrepresented in the context of accident research. With regard to the development of measures, too, there are only a few target group-specific approaches. The primary aim of the study was to obtain information on the frequency of psychological abnormalities as a result of traffic accidents. In addition, factors should be determined which influence the development of psychological complaints in terms of protective or risk factors.

The study collected a lot of information on pre-, peri- and post-traumatic factors in accident victims. The aim of this comprehensive survey was to obtain as complete a picture as possible of the factors associated with a traffic accident. The identification of those factors that play a role in the development of mental health problems was of particular importance. For this purpose, a development-oriented survey of traffic accident victims who were in an acute hospital for inpatient treatment was carried out. The survey was carried out at three points in time: at the beginning of inpatient treatment (n1 = 226), upon discharge from the clinic (n2 = 20) and six to twelve months after the accident (n3 = 189). The data was collected by means of an interview, questionnaire and excerpts from the patient file.

Around a third of the respondents suffered from symptoms of anxiety both at the beginning of their inpatient treatment and a year after the accident, and a good quarter from symptoms of depression. In around half of these patients, the symptoms are so pronounced that a serious disorder can be assumed. A high proportion of the mentally impaired suffer from both anxiety and depressive symptoms. Post-traumatic stress disorders appear directly after an accident in around a third of the victims examined; by the time of the last survey, the proportion had increased to 44 percent. An increase in the frequency of complaints can be seen in all severity categories. Overall, it can be assumed that around every fourth accident victim suffers from serious psychological complaints such as anxiety, depression or a post-traumatic stress disorder. In most cases, the mental symptoms are permanent. Patients with previous psychological stress are particularly often affected. Several factors have proven to be relevant for predicting the psychological consequences of an accident: Patients who are psychologically abnormal in the early phase after the accident, who report a deterioration in the social support they have experienced and / or are psychologically pre-stressed, are at higher risk to get seriously mentally ill.

A concrete need for action is primarily derived from the institutions responsible for the medical care of seriously injured persons. In view of the relevance of conspicuous initial symptoms, it seems advisable to identify endangered casualties as early as possible in the treatment process in order to be able to initiate targeted therapeutic measures. In addition to sensitizing the treating physicians and nursing staff to psychological abnormalities, the use of psychological-diagnostic procedures in particular could help clarify the risk factor "early symptoms".