What are some PhD horror stories

University of the Media 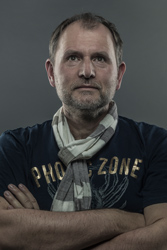 HdM alumnus Wolf-Peter Steinheisser has been a guest lecturer at his previous university since the 2016/2017 winter semester.
It was not until November 2016 that Wolf-Peter Steinheisser took first place (gold) in the "Fine Art: Book" category at the Neutral Density Photography Awards (ND Awards), a photo competition taking place in New York. The expressive images of the book project "The Mask of the Red Death", for which Steinheisser was responsible, and which illustrate the story of the same name by the American writer Edgar Allan Poe, convinced the international jury. A year earlier he received silver in the same category for the illustrated book "Do Not Open This Book", which was also awarded the Haptik Award 2015 and nominated for the 2014 German Photo Book Prize. Both books were created during the two-semester project internships of the Print and Media Technology course under the direction of Prof. Volker Jansen. "The fact that the projects are also gaining international recognition is proof of the successful and fruitful cooperation with the HdM," said the Filderstadt-based photographer happily about the awards. 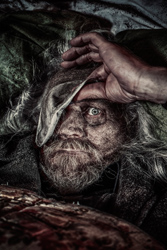 Steinheisser was awarded silver in the "Fine Art: Book" category at the Neutral Desitity Photography Awards in New York for the photos in the illustrated book "Do Not Open This Book".
The photographer, who comes from Sonneberg in Thuringia, discovered his passion for photography as a child when he received his first camera from his father at the age of six. Various photography seminars and two master’s courses followed over the years. At the age of 24 he left his home for an internship in a media company in Filderstadt, a year later he began his studies at the HdM. The right decision for him, even if he originally wanted to study medicine. "In the end I studied my hobbies and turned them into a profession," said the 51-year-old about his choice of studies. He is particularly interested in media technology, which is why studying at the HdM was ideal. Thanks to his specialization in film production and photography, he was able to let off steam in the audiovisual area, for example, was involved in the production of radio plays and multimedia shows and was able to get a taste of different areas. Immediately after completing his studies, Steinheisser started his own business with a former fellow student. In the beginning, film production was the focus of their activities, but this has changed over the years: Today the photo business dominates. In addition to advertising photos, industrial, lifestyle and people photography are among his main fields of activity. He travels around the world for his assignments. He regularly presents his pictures at exhibitions at home and abroad.

Close connection to the print and media technology course 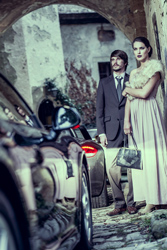 In 2016 he received gold in the same category for the pictures of the HdM book project "The Mask of Red Death". (Photos: Wolf-Peter Steinheisser)
His passion for music brought him back together with the HdM around 15 years after graduating: As a passionate music listener and collector, Steinheisser photographed numerous concerts, including at the Stuttgart jazz club Bix. When the print and media technology course was planning a photo book about jazz, the former HdM student immediately agreed to make his concert photos available for the project. In the years that followed, he carried out regular projects with Prof. Volker Jansen, Dean of Studies for the Print and Media Technology course.
Steinheisser has also been a lecturer at the HdM for the first time since the 2016/2017 winter semester. "Berge des Wahnsinns" is the title of the illustrated book that contains the horror story of the same name by the American writer H.P. Lovecraft illustrated and completed in time for MediaNight on January 26, 2017. From the definition of the photo look and the location search to the stage construction and make-up to post-production - 35 students from a total of five courses are involved in the implementation. As in earlier productions, he himself was behind the camera as a photographer. "Working with the students is very refreshing. I particularly appreciate the mutual and creative exchange," said Steinheisser.

To cast a spell over people with his pictures is his passion. Staged photography in particular is an area in which one can let off steam artistically, far removed from reality: "Telling a story using pictures is an extremely exciting matter," says Steinheisser. On his various assignments, he meets many different people. Good communication is crucial for his job: "As a photographer, you should be able to converse well with the people in front of your camera. Because good conversation sometimes contributes to a good picture," he is convinced.

The editors of the HdM website look forward to your constructive comments - whether critical, praising or neutral. We reserve the right to check contributions before publication and, if necessary, to edit or reject them.

In exceptional cases, the exam can take a few hours.

Please note the following rules when creating your comment: