Are there American snow birds in Mexico

Border between Mexico and USA: Samaritans in the desert

Hundreds of thousands try to get to the United States from Mexico and are often stranded in the desert. Then they can only hope to meet someone like Walter Collins. 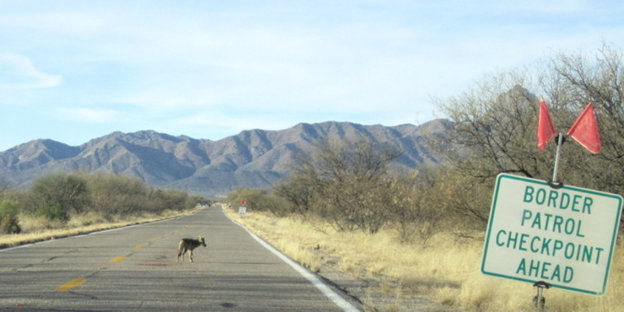 The impression is deceptive: this is the most frequently crossed section of the border between Mexico and the USA. Image: Dorothea Hahn

TUCSON taz | The vast, light-flooded land in southern Arizona looks like it is deserted. Columnar cacti and leafless mesquite trees grow out of the sand. A vulture turns circles in the clear blue sky. A coyote trudges along the highway at measured pace.

The impression is deceptive. Southern Arizona is the most frequently crossed section of the 3,100-kilometer border between Mexico and the United States. Among other things, because it is not continuously fastened with a fence or a wall. Where the flat land turns into jagged canyons, there is no longer a fence.

"There. Another dog catcher," says Walter Collins. His long, bony index finger points to a white panel van on the edge of Highway 286. "Border Patrol" is painted - in green - on the back of the white panel van. Walter Collins takes off the accelerator, drives up to the car at walking pace and peers through the small lattice window. "Nobody in there," he notes: "You're still looking."

"Samaritans - Samaritanos" is written in English and Spanish on the magnetic signs with a white cross on a red background that Walter Collins attached to the driver and passenger doors of his four-wheel drive car. The "Samaritan" loaded his car with several boxes before leaving Tucson. He carries water into the desert. As well as groceries, socks, shoes, and pomades. "Help for cross-border commuters," says the 72-year-old. He wants to prevent migrants from perishing "without any good reason".

The Border Patrols are handcuffed. They are looking for the same people. But they call them "illegals". To keep them away from the USA, they patrol along the border in their white box vans, erecting roadblocks along the hardly used highways that come from the south. And their helicopters fly very low over the desert. 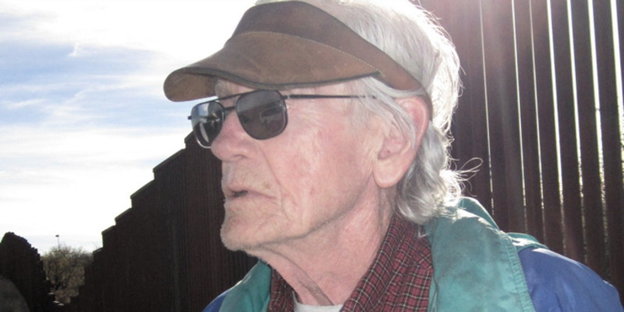 Walter Collins comes from the north. People like him are called "Snowbird" in Arizona. Every fall, hundreds of thousands of the "snow birds" come to the dry, warm state in the south. Retired Americans, white and all middle-class. The "Snowbirds" are welcome in Arizona. They buy houses, bring in money and create jobs.

Against the young, dark-skinned "illegals" from the south, the government of Arizona is constantly thinking up new decrees and laws. Even the water that the Samaritans carry into the desert is already too much for some ranchers. They mutilated a sign in the desert. Now it reads: "Humanitarian aid is a crime". "We stole this land," says Walter Collins. He means the more than 150-year-old contracts with which the US bought more than half of the territory of neighboring Mexico.

Walter Collins uses the same accusatory tone when he declares migration to his country. He considers the North American internal market NAFTA, opened in 1994, to be the most important reason that drives people out of their countries. "Our agribusiness has ruined Mexican agriculture," he says, "now we are buying up the land that is no longer profitable for agricultural use. The farmers who have become landless can use the proceeds to pay for the smugglers that take them through the desert to the USA bring. "

Walter Collins grew up in the New England Province. And was raised in a strictly evangelical manner. "I was naive," he says of himself as a teenager. Unexpected things broaden his horizons: the choir with which he travels through the USA; the Vietnam War, from which he comes back injured; several progressive clergy. Collins meets the last cleric for the time being when he comes to Tucson as a pensioner. John Five made his church in southern Tucson a haven for refugees from Central America back in the 1980s. Today it is the starting point for the water carriers in the desert.

Collins leaves Tucson south three times a week. At dawn he loads his car. Less than an hour's drive would take him to the Mexican border. But Walter Collins turns into small country roads beforehand. Stop at dried out river beds. Get out. And looks for fresh tracks in the sand. He rarely meets refugees personally. If it does, it means that another attempt to get to the north has failed: a smuggler has abandoned migrants. You are lost. You are hurt. You have nothing more to drink. You have run out of strength. Or no courage.

"Most of them have no idea how tough this is," says Walter Collins. In fact, the migrants have to walk all night. Hide during the day. And are wanted around the clock by the Border Patrol.

On his last visit to the desert, Walter Collings met two young men. They hadn't eaten for two days and wanted him to take them in the car. Get out of the desert. In an inhabited place.

Walter Collins refused. Samaritans get into trouble with the judiciary because of trivialities. An investigation into "environmental pollution", into plastic bottles filled with water in the desert, was only stopped after years of investigation. "Aiding and abetting illegal entry" is a serious offense and would inevitably lead to prosecution. "We cannot solve the big question of migration policy," say the Samaritans. "We can only help individual people in need."

Walter Collins gave the two young men water and food. And advised to hide during the day.

The Washington government has invested hundreds of millions of dollars in fortifying the border over the past few years. She has built stronger and higher fences and walls. She has reinforced the border patrol troops. And it has given contracts to private companies that operate deportation prisons and prison buses. In 2010, almost 400,000 people were deported across the border into Mexico. Every day, more than 1,000 people fail trying to get to the United States. They lose their belongings. And more and more often their lives too.

The canyons are the most dangerous. They make the Sonoran Desert, in Pima County, south of Tucson, the deadliest border piece in the United States. Last year the bodies of 230 people were recovered there. Her remains are taken to the Tucson Forensic Institute. Doctor Bruce Parks and his colleagues search for names, phone numbers, and letters sewn into waistbands or hidden in bras. Do gene tests on corpses. And take fingerprints from hands that have dried out to leather. They cannot identify three out of four dead. If they are cremated anonymously, the institute will keep a piece of their bones. In the event that relatives ask later.

Wooden crosses for the dead

In the desert, small piles of stones with wooden crosses remind of the victims. "Unknown" is written on it. Sometimes a picture of the Virgin of Guadelupe is included.

Such a pile of stones also lies in the settlement of junk-old caravans and tents at the end of the road from Jalisco, within sight of the border with Mexico. "No más muertes" - no more dead - is written on a car door at the entrance to the site. A handwritten note dangling over a tent inviting migrants to help themselves to food and drinks. "Have a good trip, compañero" ends the note.

Nobody slept in the camp beds that night. But all the water bottles are empty. While Walter Collins replaces them with new bottles from his four-wheel-drive vehicle, a white Border Patrol van drives past at walking pace on the dirt road. The Border Patrol will stay outside the tent city area. It's private property. The Border Patrol respects that. Even in the desert.

Walter Collins will soon be hiking 3,800 kilometers further northeast. He and his wife spend the summer in Martha's Vineyard, Massachusetts. When it's scorching hot in the desert, younger people will take over from him. Some will spend the summer in the tent city to help cross-border commuters.

"It is wrong for them to give them something to eat and drink," says the man who is pacing up and down next to the gray bus: "Illegals have no business here." "Security" is written on his black jacket. Handcuffs and a pistol dangle underneath. He has parked the gray Wackenhut prison bus in the shade of a mesquite tree and is waiting for the Border Patrol to bring the prisoners to him that morning. "We have 20 million illegals in the US," he says, "they send our money to Mexico. We can no longer afford that."

Walter Collins used to be a school psychologist. He watches the prison bus driver from a distance. "For him it is the best-paid job of his career," the Samaritan said indignantly.