What is the opposite of stoicism

stoicism : What does the word stoicism mean? What is the ethymological origin of this word? What is stoicism useful for? What are synonyms (similar terms), what are antonyms (opposites) of stoicism? Stoicism means inner serenity, calm and equanimity. Stoicism is the ability and discipline to make one's mood independent of what is not under one's control.

Stoicism as the basis of ethical, committed action - and inner happiness

From a lecture by Sukadev Bretz 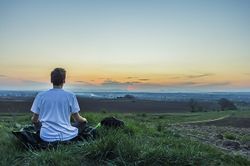 The importance of stoicism

Stoicism is a certain Germanized word for the attitude of the Stoics. The so-called Stoa was a philosophy of life in antiquity, known were Zenon, Cicero, Seneca and Mark Aurel and we know today that stoicism was also influenced by Indian ideas, perhaps even yoga ideas. But it has become a philosophy of its own in Roman and Greek antiquity.

What is stoicism about?

Stoicism is based on several philosophical foundations and in particular a certain philosophy of life. One of the Stoics' statements was:

This is of course a big statement: "Learn to make your joy and your frame of mind independent of automatisms from outside."

So, the Stoics have said, “You are out of control of praise and blame, so learn to break away from praise and blame, stay calm whether or not someone is nice to you. Success and failure are not in your hand, do not make your mood dependent on whether you are successful or not. "

What does stoicism mean to live?

A stoic outlook on life and stoicism would mean not letting yourself be so influenced whether or not someone else praises you, whether things go well or not. Some people get upset about anything, and after they get upset, they get back problems.

If you learn to approach things with a little stoic attitude, with stoicism, then back problems often don't come. And when they come, you can also endure and endure the back problems with stoicism, you can learn not to be influenced by them, because you are not just the back problems. There is joy deep inside you, happiness deep inside you, even if you have back pain. And deep within you is also the ability to grow beyond back pain. You don't have to let yourself be determined by back pain, because you have the opportunity to detach yourself from it.

Stoicism is similar to Raja Yoga

Stoicist philosophy or stoicism has a lot to do with Raja Yoga. Raja Yoga is the yoga of self-control. Raja that is the ruler, Raj means to rule. Raja Yoga teaches you that you can calm your mind and experience happiness. There are these famous verses from Patanjali in his Yoga Sutras: “Yoga is the bringing to rest of the thoughts in the mind, then the seer rests in his true being.” And a comment says: “And in the true being, there you experience Happiness. ”Hence, learn to calm your mind and learn to make your mind happy. You can be happy at any time, you don't need anything outside, you can even be happy when your body creates pain, at least that is possible to a certain extent, you can practice accordingly.

Personality traits and virtues are best understood in their relationship to one another. Here are some pointers on how to see stoicism in relation to other skills and behaviors, as well as vice:

Any quality, any virtue that is exaggerated becomes a vice, a vice, an unhelpful quality. Exaggerated stoicism can degenerate into apathy, indifference, indolence, rigidity, for example. Stoicism therefore needs the cultivation of activity, passion, energy, commitment, enthusiasm, dynamism as the opposite pole.

Opposite of stoicism - antonyms

There is an opposite to every property. Here are possibilities for opposite of stoicism, antonyms to stoicism:

Stoicism antonyms at a glance

Stoicism in relation to virtue groups, personality factors, and temperaments

Stoicism is a personality trait that can be made stronger within. Maybe you want to live stoicism more, apply it more in everyday life. Here are a few tips:

Affirmations on the subject of stoicism

Here are some affirmations for more stoicism. Under the keywords "Affirmation" and "Miracle Affirmations" you can find out more about the function and effectiveness of affirmations. Not all of the affirmations listed below fit - use the ones that seem right for you.

In yoga, this is often combined with a mantra. Because a mantra makes the affirmation stronger:

Developmental affirmation for stoicism Some people feel like hypocrites or hypocrites when they say "I am stoicist" - and they are not at all. Then a development-related affirmation helps:

Thank you affirmation for stoicism :

Prayer is also a powerful means of cultivating a virtue. Here are a few ways to pray for more stoicism:

Ask yourself: what would I have to do to develop stoicism?

You can also ask yourself:

Properties in the alphabet before stoicism

Properties in the alphabet according to stoicism

Lecture recording on stoicism - audio to listen to

Here you can listen to a lecture by Sukadev Bretz, founder of Yoga Vidya. This talk is the audio version of a video on stoicism, part of the Yoga Vidya Multimedia Lexicon of Virtues. This audio will be inserted later. We ask for your understanding

Developing seminars on the topic of love:

More information on yoga and meditation