The most dangerous animals in Australia and New Zealand

Traveling to Australia or New Zealand is one of the last adventures on planet earth. At least if you as a traveler venture into the almost untouched zones of the Australian outback. What awaits you there has already been shown impressively and sometimes fun in many movies, as in the case of the hit movie from the 80s, Crocodile Dundee, impressively. Here a small crocodile of 5m and there one of the many highly poisonous snakes, of which there are quite a number in Down Under. Some of the most dangerous animals are not only to be found in the interior of the country, but cavort in the offshore waters or in the rivers themselves. Let's take a look at the animals that adventure travelers in Australia and neighboring New Zealand are particularly careful of should.

Dangerous animals in the sea off Australia 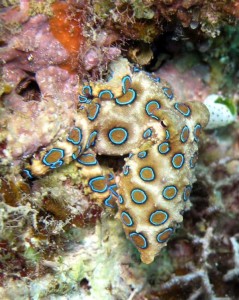 To the poisonous fish, which can hardly be recognized because of their skillful camouflage, belong to those who hide in the sand Scorpaenidae, the stone fish. Their poison on the dorsal spines is highly potent and can have extremely unpleasant health consequences if they come into direct contact. The poison of the Conus textile, in German Weberkegel mussels, is even more dangerous. The beautiful snail shells are also a welcome souvenir. It's just stupid that if there is still a living snail in it, it shoots it with a small arrow filled with a highly toxic neurotoxin, which has fatal health effects. And worse ... there is no antidote yet.

Other dangerous animals lurking in Australian waters include the different species of sharks - there are constant reports of shark attacks on surfers - and the Box jellyfish, also known as the box jellyfish in German, and the blue-ringed octopus. The nettle poisons of the box jellyfish are among the most potent poisons in the animal kingdom. And the nerve poison of the beautiful little octopus, the tetrodotoxin, is sometimes so strong that it has fatal effects. The tiny Carukia barnesi jellyfish, whose sting can cause the life-threatening Irukandji syndrome, is hard to see and has not yet been researched.

The most dangerous land animal species in Australia 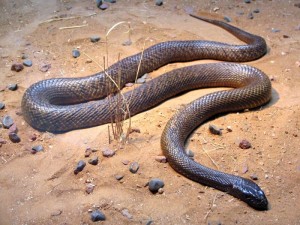 By XLerate from the English language Wikipedia, CC BY-SA 3.0

As in water as on land, there are large and small highly toxic animal species in Australia that are so dangerous that direct contact with them is anything but fun. The biggest chunk is certainly the gigantic and terrifying one Saltwater crocodile, also known as the estuarine crocodile, which is mainly in the sea, in brackish water, rivers and swamps and eats pretty much anything that fits in its mouth. Such a male boom can be 6m and more long. Even buffalo weighing several hundred kilos are on the menu of the voracious predators.

They are much smaller snakes in the Australian bush. But some of these are so poisonous that even a small bite wound is enough to cause agony. Let's start right away with one of the most poisonous of all, the eastern brown snake (Pseudonaja textilis). Despite the harmless sounding name, the poisonous snake is considered to be the second most poisonous land snake in the world. Another serious factor is that the snake is so widespread in Australia that hardly any region is not populated by it. In addition, she reacts extremely nervously and aggressively and bites quickly.

If you want to experience the most poisonous snake in the world in its natural environment, you can stay in Australia, because that's where the inland taipan (Oxyuranus microlepidotus) is at home. You will usually only find the snake in West Queensland. One load of Taipoxin neurotoxin is enough to kill an incredible 250,000 mice or 150,000 rats.

The Sydney funnel-web spider (Atrax robustus) moves on eight legs. As the name clearly expresses, the spider, whose bite can lead to life-threatening injuries, lives in the immediate vicinity of Sidney. And that makes them all the more dangerous, because contact with people is inevitably inevitable.

In the country there are fewer or less than the rare ones Katipo spider hardly any dangerous animal species. More than 1100 species of spider live in New Zealand from the approximately 40,000 species of spider known worldwide. Only a few are slightly poisonous. However, the usual suspects cavort in the sea along the New Zealand coast. Although there is hardly anything to be found out about shark attacks from kiwi land. Rather, you are allowed to mess around with sand flies, wasps and the parasites with the name Giardia on the beaches, which, however, "only" provoke a strong thin shit and are otherwise harmless.