Gender studies? Isn't that the politically correct? Two gender researchers talk about the image of their subject and the struggle for power of interpretation. 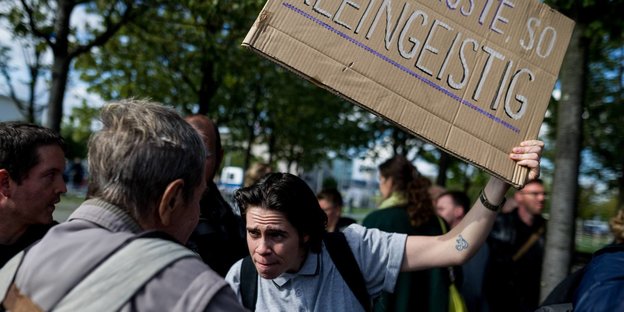 Two demos collide - one for and one against the demo for everyone. The sign says: “Your fears, so small-minded” Photo: Markus Heine / imago

Jana Cattien: You are part of an emancipatory project. An academic discipline that grew out of political movements - and remains committed to them.

Mona Motakef: Gender Studies is a field of research with many disciplines, arose from the women's movement and from queer protests. Today there are very different ways of doing gender studies. Jana Cattien stands for a direction that primarily takes a critical look at power and hegemony. But there are also researchers who do not see themselves as so political. In my subject, sociology, for example, it is about how exactly a distinction is made between women and men and what inequalities arise as a result. Gender studies do not only investigate gender alone, but also, for example, in relation to racism.

Motakef: This is due to the fact that a wide variety of actors are taking a common position against gender. There is talk of "gender madness", of "femocracy" or "homolobby". These actors might even wonder how similarly they argue.

Are we talking about the right?

25, PhD from the School of Oriental and African Studies in London. Your discipline is feminist philosophy.

Motakef: Not only. Attacks also come from the Catholic and Evangelical churches. Or from so-called concerned parents. They introduce themselves to us as a “gender elite” that promotes early sexualization or homosexualization of society. Others say that it was exaggerated, that men are now at a disadvantage, or that women are no longer allowed to become housewives. Gender is simply well suited as an enemy image, because the term is fluid and difficult to define. It is also said that gender is a symbolic glue. He brings all these actors together against the common enemy. We would say: this is a reaction to precarization. There are more and more precarious working conditions. That unsettles you.

Really? The worse the economic situation, the worse do you find gender?

40, is a research assistant at the Institute for Social Sciences at Berlin's Humboldt University. She explores the relationship between gender and unsafe work.

Motakef: I did not say that. Not only has the economic situation become precarious, but also certain certainties: what masculinity is, femininity, sexuality, a good childhood. Right-wing groups in particular are therefore trying to build counter-hegemonies. Of course, this is by no means only joined by the so-called modernization losers.

Cattien: We have to be careful not to narrow the problem down to gender. I think we should speak of anti-political correctness instead of anti-gender. In the end, these people want to get privileges - including racist attitudes.

Then let's talk about political correctness. Two PC-critical texts have just won the German Reporter Prize. The award-winning essays see freedom of speech and artistic freedom in danger: through a rigid notion of what one can say or express through art. Do you understand why people look at anti-sexist and anti-racist movements that way?

Cattien: Who are you talking about?

In one of the award-winning essays from the time it's about works by two US artists, for example. The two had discussed violence against black people and indigenous people in the United States. Affected groups criticized, however, that the white artists had made a story their own that was not theirs. Many people think: There is a legitimate concern here, but it goes too far in terms of expression.

Cattien: With the text, I by no means had the feeling that the author recognized a legitimate concern, but that he wanted to defame it. He invokes enlightenment ideals of artistic freedom - but from the beginning these were based on colonial, racist and sexist exclusions. It is interesting how anti-political correctness tries to defend the West as a center of culture and values; “30 years ago, before the People of Color and women ruined everything for us, we produced such great art.” I find this rhetoric problematic.

Motakef: I think you have to discuss the individual cases. This year there was also the debate about the poem on the facade of the Alice Salomon University in Berlin, which, according to the students, is misogynistic. This and other examples cited by PC critics must of course be negotiated. But it also has something of a sham debate. In the case of #metoo, too, there is always talk of moral apostles or guardians of virtue. It would be nice if our problem were only that we were ruled by virtue guards. But the problem is completely different, namely sexual violence and sexism.

Many have the feeling that something is being prescribed from above. Academics determine what is okay to say and what is not. I suppose you see it differently ...

Motakef: When universities say: Our language regulation is this and that, then it is definitely a regulation. But if you are annoyed that you are being forced to gender, you should also admit: What we did before was also gendered. Just male. The question is what decision to make.

Who should make such decisions and how?

Cattien: I am rather skeptical about regulations. For me there always has to be a decision-making process from below, one that is constantly moving. Interventions from above tend to choke off the gender and language debate.

Let's apply that to art. A group of activists demands that an artist destroy or give their work to them - do you think that is an example of a bottom-up decision-making process?

Cattien: In this case, it is crucial that the artist herself perceived the message of the protest against her work and accepted it for herself. From the point of view of anti-political correctness, everything is always the same as censorship. This pretends that there are no legitimate arguments to protest against the work of art. Basically it is a depoliticization of debates to claim that it is all about freedom of expression or of non-freedom of expression. After all, you always negotiate political issues.

So are we in a struggle for power of interpretation that is just becoming a little more egalitarian?

Motakef: It makes more visible than before. It even leads here and there to legal equality - keyword marriage for all or third gender. It hasn't changed as much as is often claimed. But the inequalities are becoming more visible. Sexual violence is an example of this.

At the same time there is a backlash, a strengthening of right-wing populism in Germany and abroad. How does that fit together?

Cattien: I see it a little differently. When you talk about backlash, you neglect a lot: the attacks on asylum seekers' homes in the 90s, the NSU murders. We should not diagnose breaks where there are actually continuities. Racism has always played a role in Germany.

And yet, with the AfD, there is only now a party in the Bundestag that explicitly demands that gender studies be abolished. Isn't that a break?

Cattien: We have already seen in the case of the NSU murders that racism is powerful in German institutions. The Office for the Protection of the Constitution is almost guilty of complicity here. I find it naive to pretend that everything is suddenly much worse because the AfD is in the Bundestag. What is judged “worse” when - and by whom? Who perceives problems and when? It's all about the power of interpretation again.

This struggle for power of interpretation - is it possible to fight it out in a somewhat friendly manner?

Cattien: I don't think it works without conflicts. After all, we're talking about shifting the balance of power. Nobody will give up any privileges voluntarily and without pressure. I and many others are also ready to seek this conflict.

Motakef: These are just social struggles that are being waged right now. I think that's productive for now.