What is your favorite board game

2019 was a good year for board games and I got to know a lot of great new board games. That's why I've now sat down and put together my top 10 board games for 2019.

In the following you will find out which board games made it into my top 10, which position they are in and which games deserve a mention.

I am of course very happy about your feedback on my list and which board games from 2019 you particularly liked.

Before I get started with my top 10, first of all a disclaimer. Of course, I haven't played all of the board games that came out in 2019 (I don't have the time or money for that). And some games I just haven't played enough to include on this top list.

Especially among the games that only appeared at SPIEL at the end of October last year or Kickstarter that were only delivered at the end of the year, there are a few that I have not yet been able to make a final assessment. So it's a subjective list and clearly my personal Top 10. You should always keep that in mind.

Maracaibo is my favorite game of the last year.

I had high hopes for Alexander Pfister's new game, but I didn't think it would be that good.

We travel with our ship through the Caribbean, fight for different nations, complete quests, hire a crew, trade and much more.

Sure, the instructions have a few parts that could be improved and the small slices on your own board are a bit tricky.

But the board game itself is great again and exactly my thing. Constantly exciting decisions, many opportunities to earn victory points, variety through cards, interesting story use and of course the Caribbean theme. I think all of that is great. 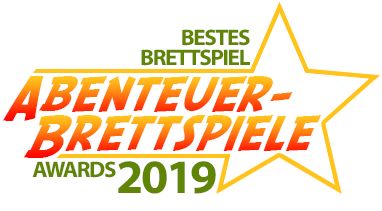 The game is complex, but not complicated, with a very good solo mode.

All in all it will Maracaibo will definitely be a classic on my shelf, which has not received my first Adventure Board Games Awards for the best board game 2019 for nothing.

2. Paladins of the west of France
Just behind in second place is the second part of the West Franconia trilogy.

Alone the large player board on which most of the actions take place, the clever interlocking of the 3 attributes, the different ways to get victory points, the clever distribution of workers every round and the special abilities of the paladins. There's so much about this game that I like.

I gladly accept that the board game has become more complex as a result and does not run as smoothly as the architects. There is a lot more to discover here in order to find an ideal strategy.

The bottom line is that I always find it amazing what good ideas Shem Phillips and S J Macdonald come up with that make worker placement interesting and exciting.

The German edition of Underwater cities was published in 2019, while the English original saw the light of day in 2018.

But I only got to know the game intensively in 2019 and had a lot of fun with it.

The combination of worker placement and card use is successful, even if you first have to get used to the fact that the cards here are weaker than the placement fields.

Building your own city, optimizing your victory points, procuring resources and so on is just fun here and I'm really looking forward to the expansion that will soon appear in German.

I also like the topic very much, which is something different than usual.

A surprise was certain Res Arcana. The little card game where we only play with a deck of 8 cards is really a lot of fun.

The fact that many cards and combos are overpowered is part of the principle here and since this applies to many, the balance has been restored.

However, it is important that you get to know the cards and draft them in order to have the same conditions at the start of the game.

For me, by far the best card game of the last year and therefore in 4th place.

5. Tiny Towns
Tiny Towns is a very nice gateway game with simple rules, but that convinces with its tactical depth.

We all receive the same resources and have to build them into our 4 × 4 field. Once we have recreated a pattern from the building cards on display, we can clear away the resources for that building.

The many different building cards add variety and yet the game is fast.

Definitely a candidate for the game of the year 2020 title for me. I'm curious to see whether the jury will agree.

Flapping wings was a little higher up in my favor over the course of the year, but there were a few more hits at the SPIEL in Essen.

Nevertheless, I am still a big fan of the Kennerspiel des Jahres 2019 and regularly attract new birds to my ecosystem.

Personally, I don't mind that completing the bonus cards is associated with a little luck. I just like the variety and the different possibilities. I'm more of a tactical player anyway (others would say the belly player ;-)).

Apart from that, the production of the game is also convincing. I would like this to become a benchmark for board game production quality in the future.

Soon there will also be a review of the game here on the blog, which unfortunately I haven't gotten to yet.

My favor has risen over the course of the year Hadara, which has firmly established itself in my collection as a fast and interesting drafting game.

We draft cards from a display in 3 epochs and gradually build up a collection of cards. These not only bring us victory points, but also reduce the cost of additional cards of the same color. Purple cards also bring special effects.

In addition, we have to advance on 4 tracks and can earn more victory points in this way.

I always enjoy the game a lot and therefore earned a place in my top 10.

I like the big Lorenzo board game very much and was therefore looking forward to this offshoot.

When I saw this, I was a little disappointed at first. But the procurement of resources with the balls is a brilliant trick and you have to make interesting decisions all the time.

In addition, the other elements of the great predecessor were sensibly steamed down and inserted here, so that I like to take a quick lap Masters of Renaissance games.

The language-neutral game material ensures that you can also play the English version without any problems. As far as I know, a German version has not yet been announced.

Also Space Base is one of those games that I wasn't expecting that much from. That's why it was chosen as the surprise of the year at my awards.

In Space Base let's buy new spaceships for the 12 slots of our station, which bring us better bonuses. The spaceship, which was there before, is pushed underneath the tableau without being rotated and gives us a bonus when it is the opponent's turn.

And then we roll the dice similar to Machi Koro, but can add the results of the two dice together or use them individually. The goal is to be the first to score 40 victory points.

The principle of the income bar and the available credits is also solved in a cool way.

The bottom line is a very varied dice game with many manipulation options, special abilities and almost no downtime.

10. The taverns in the deep valley

My top 10 closes the game The taverns in the deep valley from.

This is a combination of dice drafting, deck building and dice placement. We run a tavern and try to use stronger promotions with better guests and more tables. Ultimately, we also have to hire nobles who bring us victory points.

I think the mix is ​​very good and the other modules bring variety and more ambition into play.

Unfortunately, the game felt a bit lost that I can't understand. I like it very much and it keeps coming back on the table.

While the top 10 places were pretty clear, things got harder further down. In my opinion, 2019 was simply a very good year for board games. And so there are a number of games that ended up just outside the top 10, but which I would like to briefly address here.

Just one certainly does not need to be specially mentioned here. It has become a big hit that works with all players. Circadian: first light is a very nice dice placement game, which suffers a little from its graphics, which certainly not everyone likes.

With Amul there is a card game that works with up to 8 people and is really fun, especially in larger groups. Has an interesting twist in deck building Rune stones brought. Here we have to play 2 cards and then remove the higher value from our deck.

Parks will not appear in German at Tierra del Fuego until 2020, which is why I left it out of my top 10. It sure is one of the nice games lately. The new edition of The castles of Burgundy has definitely caused divided opinions. I still think it's a great game.

The former Kickstarter Coloma brings an exciting rondel mechanism and plays much faster than expected. And also Tapestry I would like to mention here. Sure the expectations were too high here, but for what it wants to be, it's great.

The 3rd edition of Arkham horror also improved a lot and turned out to be a really good game.

Unfortunately, I haven't played a few games often enough to be able to form a final judgment. So unfortunately it happened Star Wars: Outer Rim and Zombicide: Invader not on the table often enough.

At the end of the article, I would be very interested to know what your top 10 board games are from last year.