Do our thoughts work paradoxically

The Pinocchio Paradox - Why Pinocchio Can't Have a Nose 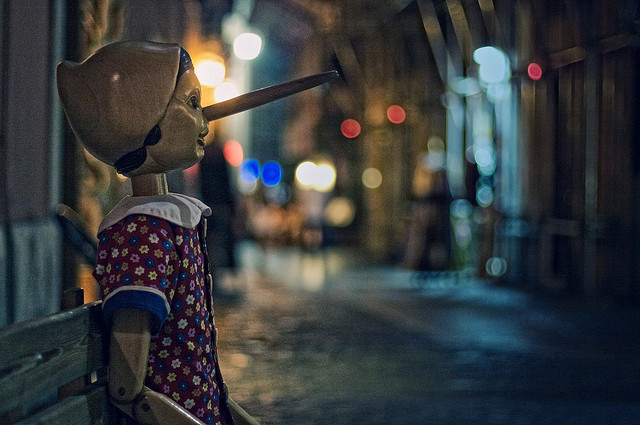 Preliminary thoughts on the liar's paradox

Some well-known ones are: "THIS sentence is wrong." Or "THIS sentence is not true." Or as a question: "If I say that I lie, am I lying or am I telling the truth?" Truth and lie are not easy to each other to separate. It would be easier if it was visually recognizable as soon as a lie was made. For example, if the liar grows a long nose.

Preliminary remarks on the Pinocchio paradox

At the end of the 19th century, the Italian author Carlo Collodi created the story about a wooden doll who wanted to become a real boy with the story of Pinocchio. Before he could do that, he had to endure many different adventures. His foster father Gepetto instructed him to do well at school and learn helpful things.

But again and again Pinocchio encountered dangerous and dodgy characters who often literally drove him off the path and in great danger. As soon as Pinocchio had managed to escape these situations with great difficulty, he tried to better portray himself in his justification of how it had come about in the first place. But he often did not adhere to the truth and began to lie. Since he was still a wooden doll, his nose began to grow with every lie.

Thought 1 - The Difference Between a Paradox and an Antinomy

The difference between a paradox and an antinomy is not huge when in doubt, but it can be serious. For an approximation, the consideration of the word origin and meaning can serve.

The term “paradox” is derived from the Greek. The word components are “para”, which means “next to”, and “doxa”, which stands for “opinion” or “proposition”. A paradox is therefore a view that exists alongside the generally accepted doctrine.

“Antinomy” also has its linguistic roots in Greek. Here the word components “anti”, meaning “against”, and “nomos”, meaning “law”, come together. An antinomy thus forms, as it were, a "counter rule". Many of the logic games known as paradoxes are therefore more like antinomies.

Thought 2 - Barber or non-barber, that is the question!

But what happens when Pinocchio says: "My nose is growing right now"? There are so many different solutions on the Internet. One of the most popular is the recourse to Russell's antinomy. At the beginning of the 20th century, the mathematician had developed a formula for solving such logical problems.

The Pinocchio phenomenon is also attempted in this way. Consistently, however, this would have to be thought in such a way that Pinocchio has no nose at all, because such a nose cannot exist. It's a shame, but as if it had been suspected!

Thought 3 - When did Pinocchio lie?

The outside observer would then see Pinocchio's nose grow. Pinocchio's statement would be wrong at the time of formulation and would only produce the event of the growing nose - as a self-fulfilling prophecy, so to speak.

The difference between the time of the statement and the time of observation gives the impression that Pinocchio's statement is now true and would lead to the result, which is impossible in itself, that the nose grows despite a true statement.

The phenomenon can then actually be solved according to Thomas' theorem: "If people define situations as real, their consequences are real". So Pinocchio's nose grows because Pinocchio thinks he's a liar. Since those around him define the growing nose as a real situation, the consequences of mistaking Pinocchio for a liar are real. With this, Pinocchio has produced a perception free of contradictions through a lied statement.

Do you have an education voucher?
Successful online training including exam & certificate