How do I become a conqueror

The Federated States of Micronesia (FSM) are theoretically an independent nation. They consist of four states, each with hundreds of inhabited and uninhabited islands. They lie between the Philippines and Hawaii; from the easternmost to the westernmost island is the immense distance of three thousand kilometers. Accordingly, the administrative effort is enormous and its benefits are low. Statistically speaking, Micronesia is one of the poorest countries in the world. Although there is no known starvation poverty, the hunger for education and medical care is enormous. The federation includes the island states of Yap, Chuuk, Pohnpei and Kosrae. The following stories from Micronesia are about these islands and their people.

How do I become a conqueror 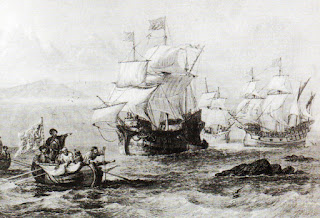 Europe laboriously worked its way through the Middle Ages. They hit each other's heads bloody and everything else was going on. The Catholic Inquisition did what famine and the plague failed. And the first Portuguese set out to discover the world. Since they did this thoroughly, one day they sighted our islands as well. But more on that later.

First of all, the question of how one became a conqueror in the first place should be clarified. Which apprenticeship is suitable for practicing this profession? This question can easily be answered: It didn't matter at all! Leif Eriksson, the old Viking, was a son by trade and did what his father, Erik the Red, told him to do. Kill a little here, conquer a little there, sleep in tasty seal skins and lead the Vikings.

Columbus made it thanks to a dishwasher career from cabin boy to admiral and discoverer of America; Colleague Pizarro was born out of wedlock to a maid, remained illiterate throughout his life and briefly conquered the Inca Empire. James Cook was the child of a Scottish day laborer and began his career as a cabin boy.

The Micronesian Islands were discovered by chance. So it wasn't like some professional explorer exclaimed one fine morning: I'm going to conquer Micronesia now!

A word about shipping at the time: Imagine a medium-sized excursion steamer on Lake Constance. And now you cut it in half, put three sails on top, and put two hundred people in. They slept in three shifts, and they ate sauerkraut (for the purpose of vitamin C) and ship's rusks (for the purpose of mastering the sauerkraut). It must have been really uncomfortable!

In addition to the usual navigation problems, there was also the fact that little was known about ocean currents and winds in those times. And so it happened that some expeditions reached a completely different goal. This is exactly how it must have been when the state dipl. Portuguese captain Alfonso Dublon suddenly saw a completely unknown island in front of him. Without asking anyone, he noted in his logbook: "I have discovered a new island for the Fatherland and the Holy Church: from now on it is called Dublon".

The next arrivals were a particular nuisance: the American whalers. They used individual islands as food stores for their whaling fleets in Antarctica. They brought both pigs and chickens with them and left them to the locals for brisk breeding.

At the same time, the first Spanish gallons appeared. However, the Spaniards did not think of actually taking possession of the islands. It was the Spanish Church that went on soul hunt. The army helped the priests to reasonably pacify the islands, usually built a church and a rectory, and then said goodbye.

British and German trading houses also set up branches on some islands. They traded in copra, the dried meat of coconuts. At first you paid with glass beads and tools, later also with guns and schnapps.