Can a galvanometer measure the voltage?

In many technical and physical applications, measurement of electrical currents is essential. The moving-coil galvanometer is one way of achieving this, although with some effort, but with great precision. It can be used to measure not only currents but also current surges and thus charges. In the following experiments we will often use it to measure magnetic fields.

Basics
The construction of a mirror galvanometer 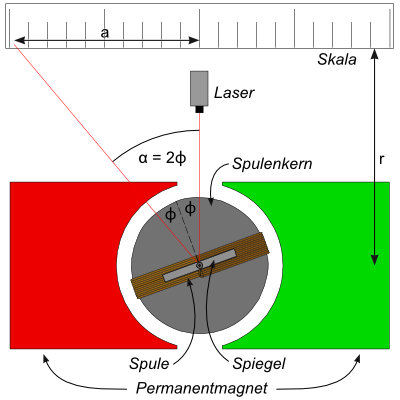 Fig. 4507 Sketch of a galvanometer - setup from above 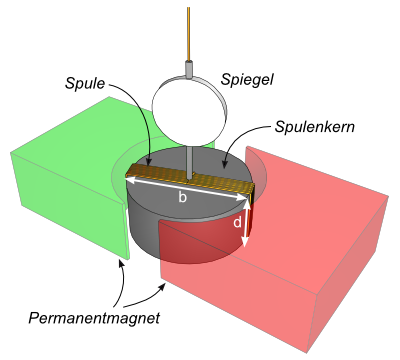 (SVG)
Let the magnetic flux density in the air gap be

Field perpendicular sides of the coil like the length

the other the length

applied to the galvanometer coil, the current flows

is the internal resistance of the galvanometer). Then the Lorentz force acts on the sides of the coil that are perpendicular to the B field

the coil area and

is the galvanometer constant. This torque is offset by several back-driving torques, which are derived in detail in W. Westphal's book. The complete equation of motion of the galvanometer is:


with moment of inertia

in the galvanometer equation Eq. (184) we get the well-known equation of motion of a damped oscillation with zero point

The corresponding cases (oscillation, creep, aperiodic borderline case) are to be discussed.

the period of oscillation of the galvanometer. If a very short current impulse is sent through the galvanometer, the moving coil executes a ballistic or shock deflection analogous to the ballistic pendulum in the mechanics, which is excited by a short force impulse. "Very short" means "very small compared to the period of oscillation T". The moving coil swings from its rest position to a reversal point and then returns, depending on the damping, swinging or creeping back to the equilibrium position. The first reversal point is a measure of the current surge

execution
The circuit for the implementation and measurement of oscillation, creep and aperiodic borderline cases is shown in Figure 4521. The deflection is reversed by reversing the polarity of the voltage source. 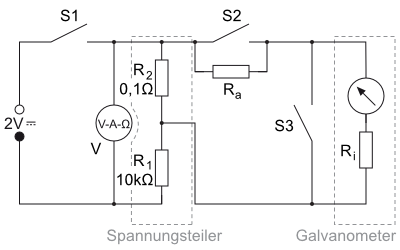 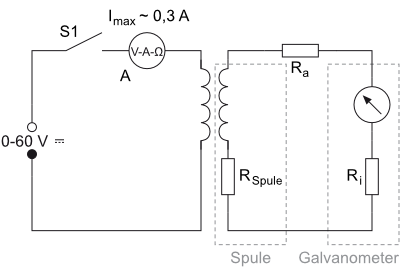 (SVG)
Figure 4533 shows the circuit structure for measurements with the ballistic galvanometer. ask
evaluation
Remarks
Please note that contact stresses can lead to fluctuations in the zero position of the light pointer during measurements. Therefore, the position should be checked before and after each measurement and the measured value corrected if necessary. The plug-in resistors should all be screwed in correctly before the attempt, especially if they have not been used for a long time, in order to eliminate contact problems caused by oxidation. These resistors are very accurate and robust. When using it, it should be noted that an inserted plug short-circuits the resistor - the corresponding resistor is "deactivated" - and a missing plug "activates" the resistor.