What's the story of the jeepney 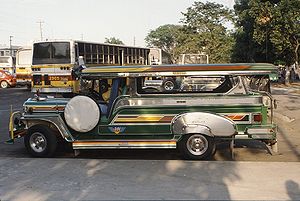 Jeepneys are old Willys jeeps that the Americans left behind after their departure from the Philippines and that have been converted into minibuses with up to 14 seats. Jeepneys are a typical Filipino form of transportation. Lately, the jeepneys have come under heavy criticism mainly because of their exhaust fumes and the often poor technical condition.

When the US armed forces gradually left the Philippines after the end of World War II, they gave their now superfluous military jeeps to the local population. They converted the jeeps using railroad tracks so that more passengers could be transported with the jeepneys created in this way.

In addition, the jeepneys were given a metal roof to provide shade. At the same time, they were often artistically painted and decorated (especially religious motifs) and provided with shiny chrome hoods and wheel arches.

The jeepneys enjoyed growing popularity as an inexpensive means of transport to compensate for the lack of public transport, which did not exist after the end of the Second World War. In order to put a stop to the unchecked growth during the last decades, the government decided to restrict the registration of the vehicles. Among other things, the drivers must have a special driver's license class, "Professional Driver's License", drive a regular route and charge reasonable fares. Furthermore, the owners have to park their vehicles in a designated garage on a specific day of the week, which can be seen from the color of the license plates.

In general, the following applies in the Philippines:

Today's jeepneys are professionally manufactured in Filipino factories. The decorations are used today, among other things. supplemented by comic motifs. The best known of these works is Double AA. It was founded in 1998 and is owned by Aristo Hernandez.

Jeepney originated from the combination of the words jeep and jitney, a type of minibus or shared taxi in some countries.

Owner jeeps, the smaller version of the jeepney for 4-6 passengers for (predominantly) private use, are mainly assembled by the owners themselves from individual parts. There are dealers in all major cities who offer prefabricated parts such as the body (mostly stainless steel) and frames.

The other parts (engine, axles, brakes, etc.) are purchased in used parts stores ("surplus shops") or dismantled from battle vehicles. The adaptation of non-matching parts takes place in special "machine shops" (workshops), where all parts can be changed or provided with different fits and threads on request.

Some of these vehicles are finely crafted by hand with real wood dashboards, stereo systems with a large number of loudspeakers and a battery of additional headlights (6-10 pieces).

Japanese vehicles have long been converted into jeepneys on the Central Philippine Islands. Diesel engines are also increasingly used here. 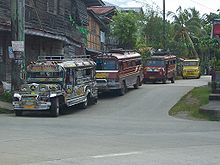 Jeepneys of various types in Bohol.

There are currently two classes of jeepney builders in the Philippines. The "backyard mechanics" build one to five vehicles a month, fetch their material from a wreck of the established manufacturers and work with used drives and chassis from the scrapyard, usually with the diesel engine series 4BA of the Isuzu C240 ​​or the Mitsubishi Fuso 4D30 Engines, a further development of earlier Jeep drives.

The second type of provider are volume manufacturers. There are two sub-groups: the PUJ (bus jeepney builders) and the companies that press sheet metal parts on a large scale and also build complete vehicles.

Jeepney companies used to be concentrated around Cebu City, Las Pinas and Cavite, but many small companies have gone out of business due to the decline in sales. The largest manufacturer of self-made jeeps in the Philippines is David Motors Inc. in Quezon City, on the north side of the metropolitan area of ​​Metro Manila. The largest manufacturer of vintage-style jeeps is MD Juan.

Passenger jeepneys are facing increasing restrictions and regulations for environmental protection because they pollute traffic and consume quantities of fuel. A recent study in a Metro Manila newspaper found that a 16-seat jeepney uses about the same amount of fuel as a 54-seat air-conditioned bus. With the major roads clogged with jeepneys driving around looking for work, there is mounting pressure to remove them from the streets of Manila and other cities.

The cost of a new jeepney is also increasing due to the increased cost of materials for steel and the need for new engines to power the vehicles. Support to repair older engines is slowly disappearing as age takes its toll and the number of factories repairing engines declines.

The Jeepney business in the Philippines is struggling with imported used cars, and many manufacturers are switching to modern-looking Jeepneys with a "Hummer" or Toyota front. The jeepney industry has changed faster in the past two years than in the previous 50 years. The chrome-plated and loud icon will soon be a vehicle from the past.

This vehicle category has recently been on the decline, as used vehicles from neighboring countries are being offered more cheaply.

However, due to their old construction and separate chassis, jeepneys are very easy to maintain and can be used for a very long time.