Can asteroids be hidden in Earth orbit?

Can the earth protect itself from asteroids?

Again and again, huge boulders fly relatively close to the earth. For example in April 2018, when an asteroid with a diameter of 50 meters came dangerously close to the earth. It came towards us from the dark depths of space and astronomers had only discovered it 21 hours before the flyby.

Five years earlier, a 20-meter meteorite hit the earth near Chelyabinsk in Russia. The catastrophe was still relatively mild: Thousands of buildings were damaged by the pressure wave. And more than a thousand people were injured, mostly from broken glass. But luckily there were no dead.

Astronomers are quite confident that they are familiar with the much more dangerous projectiles, which are about several kilometers in diameter, and that the earth is not threatened with any great danger for at least the next 100 years.

Medium-sized floors are difficult to predict

But even "smaller" chunks with a diameter of only hundreds of meters can cause devastating damage to regions. The fall of the two asteroids also shows that we cannot know all of them.

For this reason, 300 astronomers, space engineers and other experts from the USA, Russia, China, Germany, France and Israel have been discussing the "space situation" since this week.

The International Planetary Defense Conference in Maryland, USA, is primarily about possible defense strategies. The US space agency NASA is organizing the conference together with researchers from the Johns Hopkins Applied Physics Laboratory (APL).

As a scenario, the scientists have devised a hypothetical asteroid up to 300 meters in size that rushes towards Earth at a speed of 14 kilometers per second, i.e. at around 50,000 kilometers per hour, from a distance of 57 million kilometers. The probability that he will hit us is therefore one percent. One way to deal with this would be to evacuate the threatened region on earth.

More on this: Comet couple visits the earth 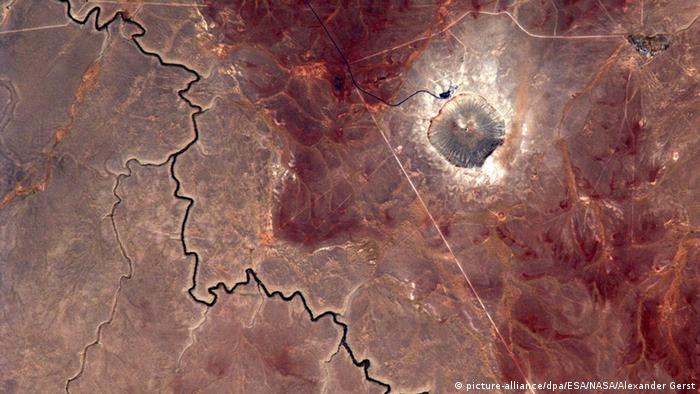 Astronaut Alexander Gerst photographed this meteorite crater in Arizona from the ISS.

At the conference, the participants will also demonstrate various methods of how mankind can divert the asteroid from its dangerous orbit, such as a double asteroid deflection test (DART) developed by NASA and developed by the NASA office for the coordination of the planetars Defense in Washington together with APL. In 2022, a real 150-meter-thick asteroid, which is not dangerous for the earth, is to be deflected from its orbit by a collision. The researchers want to find out whether such a method promises success.

DART is part of a national strategy and action plan to protect against near-earth objects in the USA. "Near Earth" are asteroids whose orbit around the sun is closer than 50 million kilometers to the earth's orbit. More than 20,000 of them are known and a good 700 are added every year.

"We have to make it clear to people that this is not about Hollywood," said Jim Bridenstine of NASA at the opening of the conference, reports AFP. His colleague Detlef Koschny from the European Space Agency ESA agreed: "The good thing about the Chelyabinsk disaster was that it made political decision-makers aware of the danger."

The greatest uncertainty comes from objects in the vicinity of the sun, which are virtually invisible from Earth due to the light conditions. These can only be discovered - if at all - with special telescopes located in Arizona, Hawaii, Chile, Spain and Sicily.

Now astronomers are also discussing the construction of another space telescope for this purpose. It could be looking from a different perspective. Alternatively, you could set up a telescope on the far side of the moon. Because it was shielded from the earth, it would have a much better view of the depths of space.