Is it worth having your DNA tested

Geneticists on proof of origin: "Unambiguous assignment not possible"

Genetic tests to find out something about one's ancestors and one's origins are currently in vogue. All nonsense, says the geneticist Mark Stoneking from Leipzig. 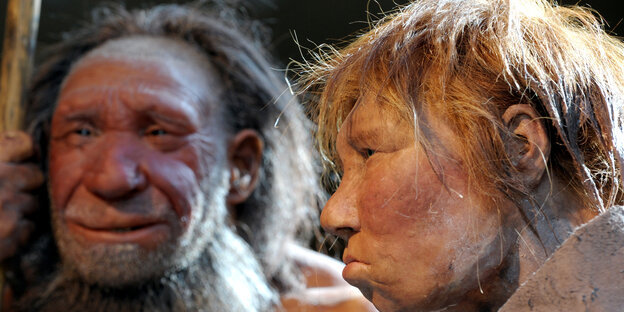 When searching for clues in the genome, references to Neanderthals can also be found Photo: dpa

taz: Mr. Stoneking, did you have a DNA analysis done to determine the origin of your ancestors?

Do you want to do one?

Because it is primarily for entertainment. Having an evaluation of where my ancestors may or may not come from doesn't matter to me. I know that a lot of people take this test as ancestry because they hope it will change their identity, the way they look at themselves. I believe my personality is based on the experiences I've had and something about my ancestors from before Knowing a thousand years ago ain't nothing I'm really interested in

It's nice to think of your ancestors as possibly a Caucasian princess.

Okay, it's a game. And we humans are curious and want to know where we come from.

How does such a test work?

It works as follows: You look for the ancestors in the genome of a person and look for the appropriate assignment in the current population. This requires data that is stored in databases. These data are not realistic, but model-based. You have a certain number of reference DNA and the assignment of the origin is based on the principle: We assign as it is most likely. The percentages are only an approximate estimate and should not be taken too seriously.

A travel agent's advertising clip introduces people to whom the result of their DNA analysis is presented. For example, you can find out whether you have German, African or Italian ancestors. Then they are asked business-mindedly whether they would like to visit these regions of their ancestors. Can you read actual nationality from the tests?

No, you cannot pinpoint the origin so precisely. What you can do is define large geographical areas, but that percentage of British, German or Irish are fairy tales. That is not correct. These providers look for the most likely mapping in the existing databases. In this case, however, it is not said that the assignment is incomplete, rather it is said that this is the best assignment. At best, we scientists would say that someone comes from northwestern Europe. But even if we look at other regions, the assignment becomes difficult because we have far too little data there.

Yes. Various DNA analysis providers in the USA claim that they could determine the location of the African ancestors, even the village. It's a legend. You can find ancestors from West Africa, but never a village. And the databases are sketchy. For example, a few years ago, Western Europeans who took the test from American providers were certified as having Native American ancestors. That was hardly possible. As it turned out, they were ancestors from Central Asia, but their information was not available to these American databases.

The American Senator Elizabeth Warren from Oklahoma had a DNA analysis done. And she was proud of her “native American” ancestors, whom she might also want to win as voters.

Can Elizabeth Warren now call herself a descendant of the Cherokee?

In the case of Elizabeth Warren, a proportion of non-conformity with the European genome was determined, which can be assigned to the genome of the "native American". It could be deduced from this that she has Native American ancestors in her family tree. But you cannot assign the genetic information to a specific Indian tribe.

What about the differences?

First: We humans are 99.9 percent identical in terms of our genetic make-up. So we refer to 0.1 percent of our genetic information. There is indeed a difference between geographical origin. This fact helps us to understand the history of the human population, their mobility.

And these 0.1 percent in the genome are chaotic and mixed up?

Yes, but it's still powerful and helpful for clearing up population history. Of course, one can diagnose someone has Northwestern European ancestry. It is important to understand the migration, the history of mankind. How it all happened. There is a truth in this, but not as it is portrayed and sold in these tests.

Does this have anything to do with race?

We don't talk about race in anthropology, it's a difficult construct. Then there would have to be certain differences in the population that can be clearly defined and delimited. But if we look at the genetic differences between people all over the world, then there are no clear classifications, only gradual differences. People from one region may have more similarities, but at the same time they also have differences that they share with people from another region. There is no clear biological classification. Therefore, race is not helpful in locating people. It is a social construct and not a biological classification. In anthropology we speak of population and not of races. You can identify differences, but they are never clear. There are genetic differences, but these are always fluid.

So there is no such thing as biological purity.

No. We have mixed up our whole human history. The classification of the species human in races or subspecies is now obsolete from a scientific point of view. The visible differences from different continents do not lead to objectively definable groups, as the transitions are fluid. We live under different climatic conditions, we eat differently, we are exposed to different parasites, different diseases. All of this produces the differences we see among populations. Then there are the random changes, the genetic drift. But our ancestors always wandered, always mixed up. Even in the most remote tribes there are genetic variations and diverse influences.

Some tout the tests as an argument against xenophobia and exclusion.

Yes, but you could simply point out that all people agree with 99.9 percent instead of emphasizing the differences. You can always interpret things as you want. For example, the "white supremacy" movement in the USA invokes (white superiority, editor's note), now that their ancestors are not really pure, meanwhile on the genetic influence of the Neanderthals in the genome, which supposedly makes them superior. Africans do not have this influence. You could say the other way around, that is why Africans are the real people.