23andMe - What does our genome reveal? 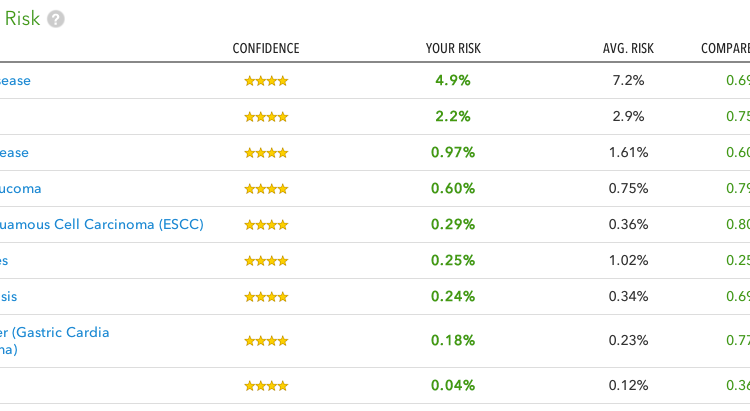 Not only since Angelina Jolie's New York Times article about the consequences she drew from her genetic test has there been interest in gene testing in the Quantified Self-Community and 23andMe. While tests carried out in a medical context are not readily available, so-called direct-to-consumer (DTC) genetic tests have also been available since around 2006, which are sold directly to end customers. How do such tests work? And what can the inclined self quantifier learn from this?

Unlike medical diagnostic tests, such as the tests for mutations in the BRCA genes described by Jolie, DTC genetic tests examine a larger number of genetic markers that are distributed across the entire genome. However, without sequencing the entire genome.

The largest provider of such DTC tests - which are intended as an aid to further training and not for medical diagnostics - is 23andMe, based in Silicon Valley. For about $ 100 plus worldwide shipping (~ $ 70 to Germany) you can get almost 1 million markers of your genome evaluated there.

The actual ordering process is no different than ordering from Amazon. After a few clicks on the website and paying by credit card, a package is on its way to Germany via express delivery from California. In addition to an already addressed package, the package contains a small sample tube in which your own saliva is collected for return shipping. After the tube is filled, all you need to do is call DHL and the biological sample is on its way back to California by express. It took me ~ 5 days from order to confirmation that my saliva had arrived in California. After that, it actually starts to wait, then it can take 4-6 weeks for the test results to be available on the 23andMe website.

The markers that 23andMe tests, the so-called Single Nucleotide Polymorphisms - or SNPs for short - denote positions in the human genome that are known to be variable between randomly observed people, unlike most of the entire genome. For many of these markers it is known whether, or that, they are related to the expression of certain properties. The possible properties range from things like hair and eye color to things like the risk of Alzheimer's disease.

Such associations are found through the use of so-called genome-wide association studies (GWAS for short). In these studies, one compares two different groups: one group shows the characteristic one is interested in, while the control group lacks this characteristic. Such SNP-based genetic tests are then carried out for both groups and the results between the two groups are then compared. If you now find a certain expression of an SNP overrepresented in one of the two groups, you can create a link between the property and the SNP.

A concrete example: In association studies, the marker rs1447295 with the value “A” was found significantly more frequently in the population of prostate cancer patients than in the healthy control population, in which the marker value “C” in particular was found (The names of the possible expressions, also called alleles, come from the 4-letter alphabet in which our, and every other, genome is written).

As simple as these studies are in the basic principle, the limitation is already evident: One cannot expect real black and white results from a genetic test that relies on GWAS, instead one enters a country full of increased and decreased probabilities. 23andMe has scrolled through the existing scientific literature for over 200 different diseases and other properties and delivers evaluations based on it back to its customers.

The evaluations are sorted into different categories: disease-related predictions about whether one has an increased, typical or reduced risk for them; how well and effectively one tolerates medication; and a general category in things like wax consistency, lactose tolerance, or hair loss. There is also a whole range of information about ancestry, so if you want to search for ancestors or have always wanted to know what percentage of you are Neanderthals, you can do that too.

For the risk predictions regarding diseases and drug tolerance, 23andMe also states how trustworthy they consider the previous studies on these associations. With a simple four-star rating similar to Amazon, you get a quick overview of how secure the information is. Trustworthy (4-star) associations were found in several independent studies and found in association studies with large sample sizes. Only for these 4-star cases does 23andMe then also give a percentage risk of illness.

If the evaluations from 23andMe are not enough for you, you can also download your raw data there and feed it into other tools, such as the Promethease from * SNPedia * or * openSNP *, and receive additional evaluations of your genome there.
The * SNPedia * is a wiki in which everyone can contribute to the scientific specialist literature - about the genetic variations that are tested by providers such as 23andMe - to be cataloged in order to enable a quick overview. These, also machine-readable, summaries are used by Promethease to produce reports very similar to those of 23andMe. Promethease can be used free of charge, but the creation of the personal report then takes some time. If you are in a hurry (or want more features) you can also use the premium version.
* openSNP * is above all a place where users can publish their DTC genetic tests in the public domain in order to make them available to the general public, e.g. to carry out their own association studies. At the same time, openSNP also offers an overview of specialist literature on and known effects of the individual markers. For this purpose, various data sources are automatically tapped: Specialist literature is searched from the database of the provider Mendeley, in any case from the freely accessible specialist journals of the * Public Library of Science *, to predict the effects of individual markers, in addition to the * SNPedia *, the databases of the * Personal Genome Projects * and the * National Human Genome Research Institute *.

But what can you do with the results? As already seen, DTC genetic tests like 23andMe usually do not offer "hard" facts, but rather probabilities. And depending on the type of illness for which there is an increased risk, little can be done about prevention. In other cases, a prognosis given by the genetic test can be used to adapt his lifestyle accordingly and to undergo preventive examinations.

The genetic test showed me a couple of exciting things personally: On the one hand, I am not a vector for any of the directly hereditary diseases that 23andMe tests. In the absence of an acute desire to have children, this is not particularly relevant, but it is nice to know. In addition, I have typical or reduced risks for Alzheimer's and Parkinson's, which - given the lack of healing options at the moment - is reassuring. As someone with a fast caffeine metabolism, it could even be that regular coffee consumption lowers my risk of heart attack, so now I even have a good excuse when I pick up my cup in the morning. For me the most exciting thing: My prostate cancer risk is almost 25%. And after looking at my raw data, I came to the conclusion that my father should have a comparably high risk, which ultimately persuaded him to go to preventive care. Which then actually brought to light a tumor that was successfully treated.

Is a genetic test generally worthwhile? Everyone has to decide for themselves and it does not depend largely on the results that are presented. However, if you want to play around with your raw data, which also drops in such a test, you should be prepared for a relatively steep learning curve: While providers such as 23andMe prepare the test results in an understandable way for laypeople or at least try to do so, many other sources of information are not directly geared to them and require a closer look at the matter. Anyone who takes such a test shouldn't forget one thing: An increased or decreased risk is neither a death sentence nor an all-clear for life.

This is a guest contribution by Bastian Greshake, PhD student in applied bioinformatics at the University of Frankfurt. First is co-founder of the portal openSNP, which transfers genetic test results to the public domain and makes them available together with evaluations. He also blogs about his experience with the quantified self and from science.