What were the main teachings of Mahavira 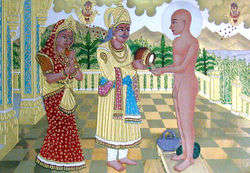 The ascetic Mahavira asks for alms

Mahavira is one of the Tirthankaras ("ford preparer", great master) and is considered to be the founder of Jainism. Mahavira was a perfect ascetic. He lived without owning anything. Another name for Mahavira is Jina

Here you can hear how the Sanskrit word Mahavira, महावीर, mahā-vīra is pronounced:

Transcription of a lecture video (2014) by Sukadev about Mahavira

Mahavira is also a nickname for Hanuman, because Hanuman was the greatest hero. And Mahavira is also the name of the founder of Jainism. Jainism is one of the religions of India, a religion that has taken the concept of Ahimsa very far. If you really want to implement non-hurting, and want to respect all living beings, you need great heroism. As Mahatma Gandhi said: “Peacefulness and non-violence are virtues of a strong man. A weak person can hardly practice it. ”Therefore, be a spiritual hero, practice every day, even when it is difficult, stand by your convictions in a friendly way, but also be heroic, be ready to sacrifice some, be ready to give some to do. Become a Mahavira, a hero for the great and the great, small and large.

Article from the book "The Lives of the Saints" by Swami Sivananda, chapter "The Prophets" Copyright: Divine Life Society

Mahavira was born in 599 BC. Born in BC. He lived seventy-two years. He left 569 BC His home. He reached the state of omniscience in 557 BC. And went into nirvana (superconsciousness) in the year 527 BC. He was the last Tirthankara.

Mahavira lived a life of absolute truthfulness, a life of perfect righteousness, and a life of complete purity. He lived without owning anything.

Mahavira's parents were Sidhata, King of Kundalpura and Queen Trisala, known as Priya Karni. "Maha" means great and "Vira" means a hero. “Tirtha” literally means ford, to go across the water to the other side. It denotes a spiritual guide or philosophy who makes it possible to cross the ocean of recurring births in this world. "Kara" means "one who acts". The whole word "Tirthankara" means: a holy teacher, a Jain.

Mahavira was not the founder of Jainism. He revised the teachings of the Jain. He was more of a reformer than a founder of this belief. In Jain metaphysics, "time" is divided into cycles. It is said that in each half-cycle, twenty-four tirthankaras appear at great intervals and renew the teachings preaching. Mahavira was the twenty-fourth, and like everyone else, it is said that he was omniscient.

Mahavira was also known by the names of Vardhamana (always advancing) and Sanmati. At the age of eight he was already observing the twelve vows of Ahimsa, etc. He was obedient to his parents and served them with great devotion and faithfulness. He was a capable statesman. He didn't get married.

Mahavira was lost in deep meditation. He knew that the pleasures of this world were ephemeral and would strengthen the bonds of karma. He knew that renunciation leads to the attainment of eternal bliss. People were very amazed at the virtuous nature of Mahavira at such a young age. He was very interested in meditation. He cultivated the arts of music and literature. Thirty years of Prince Vardhamana's life passed in this way.

Vardhamana saw from his clairvoyant ability that he had gone through innumerable births. He thought, “How many births have passed fruitlessly! I see very clearly that the soul is at its core separate from the matter of karma. I've wasted another thirty years of my life. I have not repented. I have not renounced the world for pure knowledge. The delusion that is the root of all evil has not yet been destroyed. "

Prince Vardhamana was full of remorse. He decided to give up everything worldly. He gave up ties to his parents, friends, and relatives. He meditated on the twelve anuprekshas in accordance with the Jain scriptures:

Mahavira thought deeply about these things and finally decided to give up his home. 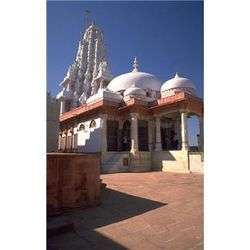 Mahavira's mother said, “My beloved son, you will not be able to endure the harshness of simplicity. There is still time. You must help your father rule the kingdom. You can still become a monk in a few years. "

Mahavira said: “Dear mother! All objects in the world are fleeting like water bubbles. How can one experience happiness in a world that is a place of sickness, sorrow, suffering, pain and death? I have to leave this world behind. "

Mahavira distributed all his wealth to the poor with his own hands. He went into the forest. He undressed there and was now absolutely naked. He turned to the north and said, “Greetings to the Siddhas!” He tore out five tufts of hair with his own hands and became a monk.

Mahavira practiced strict abstinence. He fasted for many days. He meditated on the pure nature of the soul.

Mahavira was tried by the heavenly ones. A group of handsome women surrounded him, but Mahavira remained calm and calm. He attained omniscience. He preached his message of peace for thirty years after achieving omniscience. He wandered through Magadha, Mithila etc. Many kings became his disciples.

May 21, 2021 - May 30, 2021 - Yoga teacher training intensive C - Bhagavad Gita - Live Online
Bhagavad Gita, Karma Yoga, Bhakti Yoga, Hatha Yoga, teaching techniques, meditation, Sanskrit. Bhagavad Gita: recitation, treatment and interpretation of this "highest wisdom teaching". ...
May 28, 2021 - May 30, 2021 - Asanas in the spirit of Sanskrit
During these hours you hold the asanas a little longer than (possibly) used and enjoy Sanskrit affirmations, which I get from the yoga sutras by Patanjali and Vedantic texts by Adi Shankara ...