What is the story behind Gummibaerchen

"Haribo" in the "ARD brand check": That is the secret success story of the Hans Riegel gummy bears

The success story of the gummy bear empire Haribo began - hard to believe - in a laundry room in 1920. When the founder Hans Riegel had the company entered in the Bonn commercial register on December 13, his starting capital consisted of just a sack of sugar, a copper kettle, a marble slab, a stool, a brick stove and a roller. Today Haribo is the world market leader for fruit gums and liquorice.

The Haribo story: Hans Riegel and the Second World War 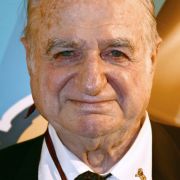 Johannes is hiding behind the name Haribo "HAns " RIleech off BOnn. He founded the company and made it famous with liquorice. In 1925 there were the forerunners of today's "gold bears" - the "dancing bears" and they were very popular: "The gummy bears from Bonn are the best that the Weimar Republic produced.", According to Kaiser Wilhelm II, according to "zdf.de" have said. The war didn't do Haribo well. The raw materials were scarce and for Sweets nobody had any money. After Johannes Riegel died in 1945, his wife first had to take over the business. But when the sons Hans and Paul came back from captivity in 1946, they saved the war-shattered company and helped it to regain its size.

When the brothers took over the company, the distribution of roles was clear: Hans Riegel presented to the outside world. Paul Riegel remained inconspicuous. It also happens that Paul Riegel is hardly known to anyone, although he has at least as much a part in the company's success as his brother.

Despite their continued success, the brothers failed to consider one thing: their succession. Hans Riegel remained childless, while Paul has four children from two wives and eleven grandchildren. When Hans Riegel died in 2013, his nephew Hans Guido Riegel took over the management of the company and ensured the existence of the fruit gum empire.

Today, Haribo's success is undisputed: 7,000 people are employed at 16 locations across Europe. You can buy gold bears in over 100 countries around the world. But the managing director Hans Guido Riegel prefers to stay hidden. For the ZDF-Document "The Haribo-Story" he shows himself for the first time in private.