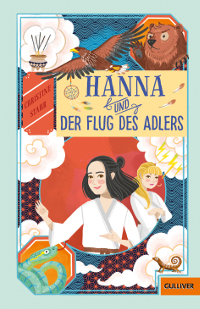 Hanna and the eagle's flight

Gulliver from Beltz and Gelberg

Hanna loves karate. But since she has been training against Sofia, it just doesn't work anymore. Sofia is quick and sneaky - and not just at karate. Grandma India has the solution: Hanna has to find her magical lucky animal. That's the craziest thing Hanna has ever heard. But when one day Hanna finds eagle feathers in her sports bag, she experiences a surprise. Source: Gulliver von Beltz and Gelberg

Hanna is an enthusiastic karate fighter who has already made it to the brown belt. Now she has the chance to train karate with the well-known trainer Amar Saadi. Maybe this comforts her about the fact that her dad has been working in Hong Kong for six months and that she now has to live with her crazy grandma. It is also not easy for Hanna that her best friend Charly is so far away.
But the training is different than hoped, because Sofia is there and she makes life really difficult for Hanna. Unfortunately, your grandma is no real help either. On the contrary - with her magical lucky animals, incense sticks and her strange outfit, Grandma is just embarrassed. Good food for Sofia. But Hanna is a fighter and she won't let herself get down that easily. And her karate training helps her with that. Because karate is not only about physical strength, but also about mental strength and respect.
But what about grandma's statement that everyone should be able to live as they want? Is Hanna doing her grandma an injustice when she demands that she dress like a normal adult and leave her alone with her incense sticks and magical lucky animals?

Hanna and the Eagle's Flight is more than just a simple karate story. It's also about how people treat each other - about bullying but also about being hurt by someone who loves you.
The book from the Super readable series from the publishing house Gulliver / Beltz and Gelberg is aimed primarily at weak and inexperienced readers. The story is easy to read and the structure of the text also suits weak readers. The number of characters is manageable and there are no subplots. The length of the text of the small book is L. The story is divided into twelve short chapters. Every now and then the text is loosened up by black and white illustrations, which, however, only support the sense of reading to a limited extent.
Information on the reading level can be found in small print on the back next to the EAN code.
The sans serif font is a little larger and the line spacing is a little wider. If readers are still overwhelmed with the book, you can read it very well together in tandem.

Conclusion: An exciting and thrilling book - told in a simple and understandable way. Suitable for weak readers, those who don't like reading, but also for real bookworms, because the topic really draws in.

You're just such a high school assistant!
Petra Bartoli y Eckert
Publishing house on the Ruhr