Who discovered the cell?

Groundbreaking chance product
The discovery of DNA in a "kitchen laboratory"

Laboratories in which structures are viewed under the microscope are always imagined as clinically clean rooms in which scientists in white coats crouch over electron microscopes and results are displayed in data curves on screens. However, 150 years ago an extremely important discovery was made in an environment that does not correspond to this picture.

Ironically, in a former kitchen in a castle from the 11th century in southern Germany, an important component of the cell was discovered!

The substance was named "nucleic acid", later renamed nucleic acid and finally deoxyribonucleic acid (DNA). It was discovered in 1869 by the then 24-year-old Swiss biochemist Friedrich Miescher in the castle laboratory, which was nothing more than a converted kitchen. 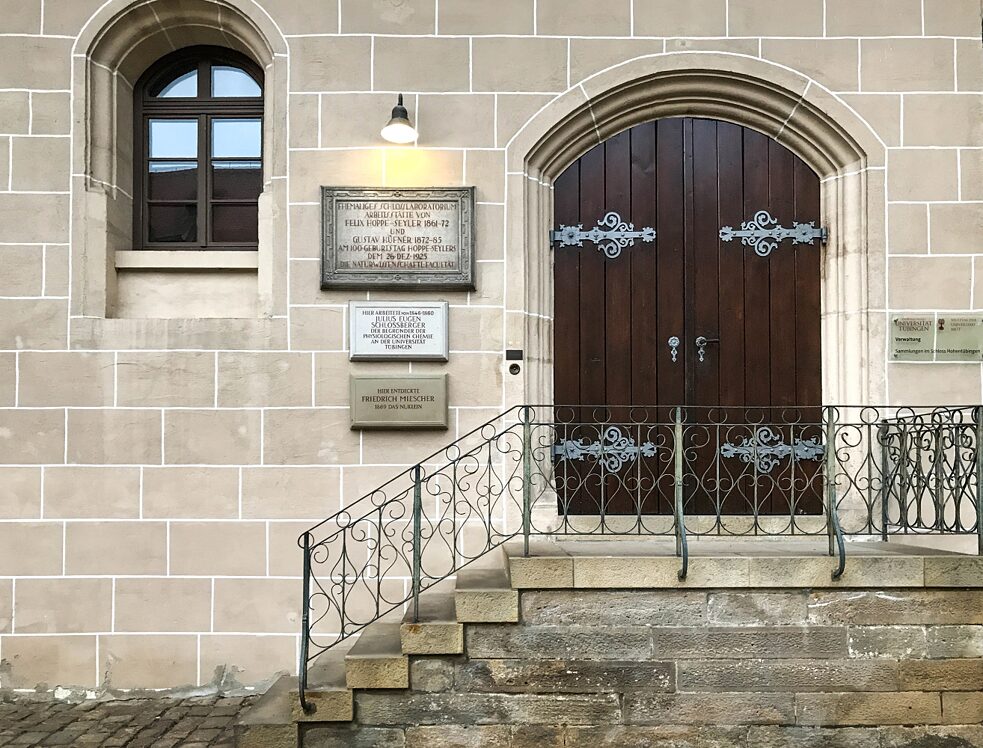 The kitchen, converted into a laboratory, in which the nucleic acid was discovered, is now a permanent exhibition about the discovery from 1869 | © Nimish Sawant The exciting thing about it: Miescher hadn't set out to find nucleic acid at all. His job was to research proteins, and he discovered that “nucleus” quite by accident. A coincidence that aroused Miescher's curiosity to conduct further research in this direction.

We owe all advances in genetic research, especially in the field of biosciences, to this chance discovery, among other things. Seen in this light, it is a great pity that the name Miescher has disappeared in the annals of pure science research, especially since many scientists who have carried out further research on the basis of its discovery have even won the Nobel Prize and have thus achieved international fame and honor.

The cradle of biochemistry

The existence of cells was first demonstrated in 1665 by the English natural philosopher Robert Hooke, but the cell theory was not established until the 1830s by the German physiologist Theodor Schwann and the German botanist Matthias Jakob Schleiden. In the middle of the 19th century it was agreed that cells are the smallest structures that contain the blueprint of life.

Johann Christian Reil (1759–1813), Johann Wolfgang von Goethe's doctor, published the scientific magazine Archive for Physiology from 1796, which primarily dealt with the importance of chemistry for research on all living beings. His pupil Georg Carl Ludwig Sigwarts (1784–1864), who initially studied fish science in Halle an der Saale and Berlin, went to Tübingen in 1818 to teach biochemistry there. Sigwart's successor was one of his loyal followers, the scientist Felix Hoppe-Seyler (1825–1895), who continued to research in the field of biochemistry and established this subject in 1866 as a scientific subject. We owe Hoppe-Seyler the knowledge that hemoglobin contains iron. 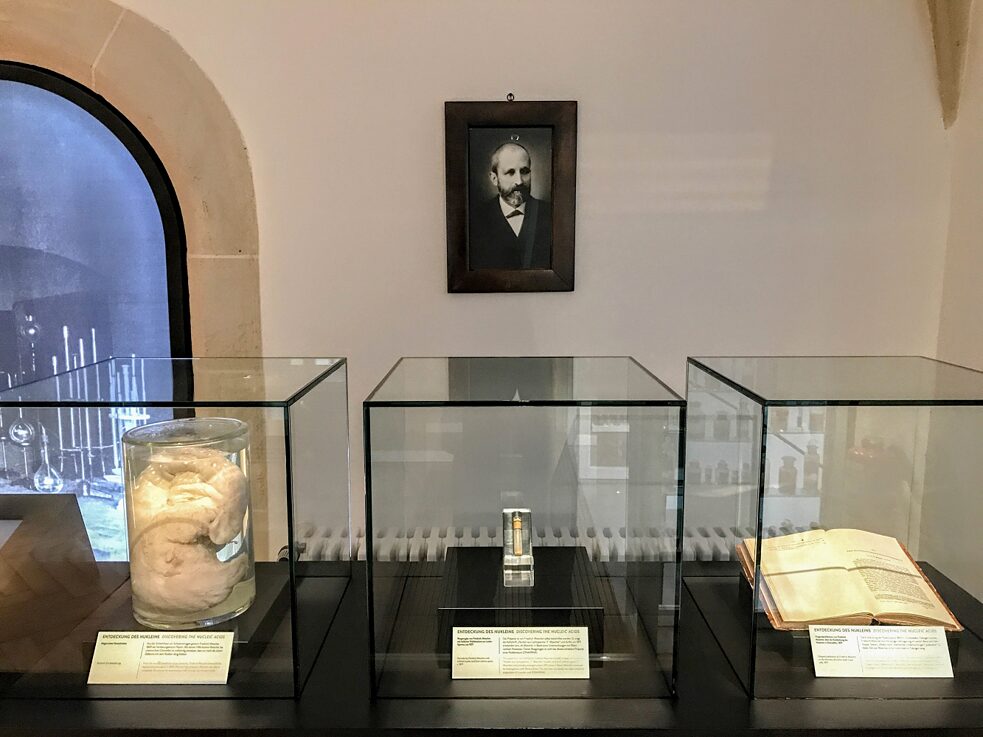 Picture of the Swiss chemist Friedrich Miescher, the discoverer of nucleic acids, with research utensils of his time, such as a test tube with nucleic acid (center) in the Schlosslabor-Museum | © Nimish Sawant In the decisive first years, in which biochemistry had to prove itself as a subject, were all Researchers in this area are based in Tübingen. The city in the south of Baden-Württemberg looks like a backdrop from Grimm's fairy tales. Today the University of Tübingen is extremely renowned for its theology and medicine departments. That it is also outstanding in the subject of biochemistry, however, is documented by Professor Peter Bohley in his book The Castle Laboratory in the Kitchen of Hohentübingen: Cradle of Biochemistry. Here, in the kitchen of the castle, Hoppe-Seyler had set up a science laboratory. In 1816 the palace building was handed over to the University of Tübingen, founded in 1477, by the regent at the time, King Wilhelm I. This converted the knight's hall into a library, an astrological observation station moved into the northeast tower, and the biochemistry laboratory was built in the castle kitchen, of all places.

The Swiss scientist Friedrich Miescher (1844–1895) joined Hoppe-Seyler in 1869. At a time when science was still researching the nature of a cell, Hoppe-Seyler was already working on the molecules on which a cell is based. His job was to study the structure of white blood cells.

During his research, Miescher found that it was difficult to isolate pure white blood cells from lymph glands, but that this was possible without any problems in the case of pus. So he got discarded bandages from the surrounding clinics and washed off the pus to collect white blood cells from it. He extracted a digestive enzyme called pepsin from the mucous membrane of a pig's stomach and injected the white blood cells into it. As a result, only these cells decomposed, but the nucleus remained behind and could be further chemically analyzed.

Miescher was actually given the task of researching the protein structure in white blood cells, as it was believed that proteins could best understand the structure of a cell. During these studies he discovered a new substance that precipitated (solidified to powder form) when acid was added and even completely dissolved when alkaline was added. So he was able to isolate a completely new molecule from the cell nucleus. By and large, this was the birth of DNA. Mischer knew that this new substance could not be a protein and called it a “nucleus”.

Mischer found out that this “nucleus” contains a large amount of phosphorus in addition to the normal protein components such as carbon, hydrogen, oxygen and nitrogen. The ratio of phosphorus and nitrogen was strikingly different than in any other documented molecule.

"Miescher discovered the nucleic acid in 1869, but his notes were not published until 1871," explains Professor Bohley. "Hoppe-Seyler carried out all the experiments again because he really wanted to make sure before publication that the results were absolutely solid." With this, he confirms that Miescher had successfully isolated an almost pure form of DNA, although he believed it was his Research had very few resources available. 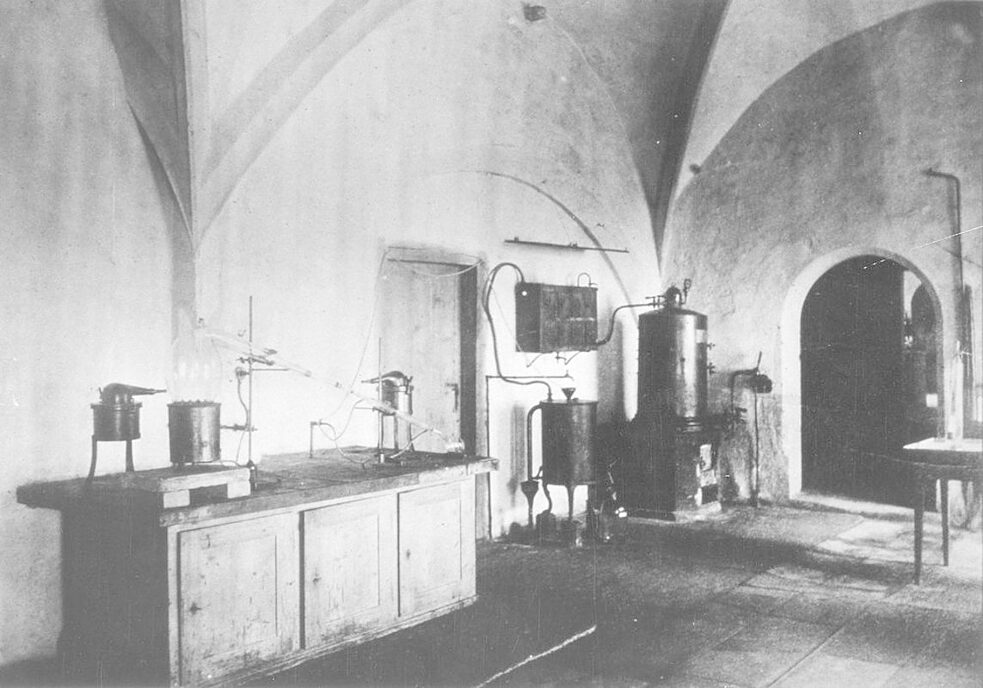 Archive photo of the early castle laboratory, the workplace of Hoppe-Seyler and Miescher | © MUT Tübingen In 2015, the former castle laboratory was converted into a permanent exhibition on the history of biochemistry. Using 3-D projections and archive material from the 1860s, the aim is to show how biochemists worked back then. One of the most valuable exhibits is a test tube with nucleic acid labeled by Miescher himself.

What happened after the discovery?

Miescher's discovery has to be seen in the context of the previous decade, which had numerous other achievements to record. Charles Darwin published his work On the Origin of Species in 1859, thus establishing the science of evolution. In 1865 Gregor Mendel had published a book on the rules of inheritance. Both researchers are world famous today, while the name Miescher hardly means anything to anyone today. In 1944, only 75 years after Miescher's discovery, Oswald Avery, Colin MacLeod and Maclyn McCarthy showed that DNA is the carrier of all genetic information. In 1953, Francis Crick and James Watson presented their study of the double helix structure of DNA.

Miescher finally left Tübingen and went to Leipzig for a year to devote himself to a completely different topic. Unfortunately, he died of tuberculosis in 1895. Since he was always a doubter and a perfectionist, the significance of his own discovery, especially when it came to passing on the genome, was never entirely clear to him.

If we can draw one lesson from Miescher's life, it is this: One should also pay attention to the chance products that come to light in research and never stick too rigidly to conventions. You never know what to expect, and wrong turns and mistakes can ultimately point the way to groundbreaking discoveries.