If Shakespeare's love story “Romeo and Juliet” “didn't end with six deaths, it wouldn't be worth mentioning”, says Guido Tartarotti on the occasion of the writer's 450th birthday.

Guido Tartarotti on April 25th in the mind for the day:

This item is no longer available

Shakespeare, God's little brother, doesn't judge. He doesn't make any judgments. His big brother created people, he shows what they are - Shakespeare shows people in their entire, terrifying spectrum, from deeply evil to radiantly good. Often based on one and the same person. Often only a few sentences separate one from the other. 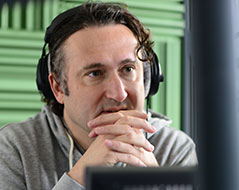 Guido Tartarotti is a theater critic and columnist for the daily newspaper "Kurier" and a cabaret artist.

Shakespeare's view of love is also radical and modern and merciless. Unlike other playwrights, he seems to distrust her. For him it is less a heavenly power than either a destructive force - or overrated at all. This also shows that Shakespeare knows a lot about us humans. We idealize nothing like love, we live nothing as banal and sobering as love.

The most famous lovers

The funny thing is that Shakespeare invented Romeo and Juliet, the most famous lovers in literary history. But if you look closely, this invention looks like a breakdown. Because the story of Romeo and Juliet is really nothing more than a crush among adolescents. At the beginning of the piece, Romeo is still struggling terribly with his love for another, before Juliet appears to him as a more interesting target. The two of them love each other mainly because it is so difficult - this is very typical for young people: What is interesting is what is complicated. If this love story didn't end with six deaths, it wouldn't be worth mentioning.

This is also what makes Shakespeare so unique: he always selects the right section. In other words, we must be grateful to him for letting Romeo and Juliet die. Thus, he has spared himself and us pieces like “Romeo and Juliet in couple therapy”, “Romeo and Juliet are fighting over custody of the dog” and “Romeo is behind with paying child support”.

Composer anonymous
Green sleeves
(CD: In the Streets and Theaters of London - street songs and theater music from Elizabethan times)