Why are English accents attractive

(Foreign) accents can be perceived negatively as well as positively. If the other person perceives our foreign accent as positive, he will be curious about where we come from, he will be interested in us. For some people, foreign accents not only look interesting, but even attractive. In this article, we examined several starting points as to why this is so. We also have two surveys and theirs Results on the most attractive accents viewed. Do you want to know which ones they are? Then read in the following article why accents make you attractive and find out the most popular accents! 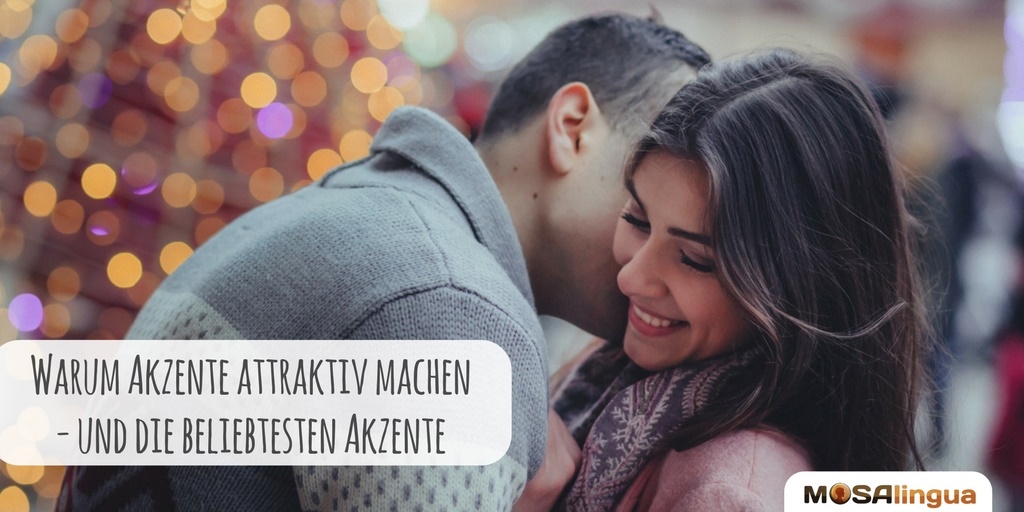 About foreigners and accents

When I traveled to Thailand for the first (and so far only) time, I suddenly found myself in a country in which I Recognizable as a foreigner just by my appearance on the street was. Before that, I only traveled within Europe and the US, where I didn't. This feeling was new to me, and kind of weird in situations where I was only among Thais.

A few years later I moved to Zurich, Switzerland for a while. The Germans there don't exactly have a reputation for being particularly popular. I always tried to compensate for this with a smile, friendliness, and this tactic generally seemed to me to be very successful (contrary to all prejudices, I felt very comfortable and well integrated in Switzerland!). What I'm getting at compared to my trip to Thailand: I found it very pleasant not to be immediately outed as a “German” in everyday life on the street. But of course only until I've opened my mouth. As soon as my lips formulated a “Gruezi” my origin was obvious, because even this little word I can only pronounce with an accent. If not through outward appearance, one pretends to be Foreigners can usually be recognized by their linguistic accent at the latest. Often an accent has negative associations: you are a foreigner, a stranger, “not from here” and you don't even speak the language properly. But, as with all things, there are two sides to this. Some people find foreign accents attractive!

Why accents make them attractive

Foreign accents should not only and not always be associated with negative traits such as “foreign, linguistically ignorant, frightening”. If you come to a strange place as a traveler and stranger, so can they curiosity awaken the locals and the strangers Interesting do. Or another example: You may be familiar with the situation yourself that you are talking to a non-native speaker with a German accent in your place of residence and you are wondering or already have an idea where they are from. And then of course what brought him here. And exactly the unusual, exotic, about a foreign accent can not only be as interesting, but also as attractive be considered.

Another cultural approach to explaining the attractiveness of certain accents is: if we are dealing with a certain thing, or in this case a certain language or a country, Combining positive things is how we find the accompanying accent attractive. So from personal experience I can confirm that it is the case with me. I basically melt away when someone speaks fluently the language I'm trying to learn 😉

Out evolutionary point of view Incidentally, this is also the subject of research. The basic theory is: Accents are good indicators of genetic diversity, and genetic diversity is something that humans strive for as it increases the species' chances of survival. For example, I read an article on this topic here. However, the author was unable to prove the hypothesis through his study and has to accept the hypothesis that “there is no connection between accents and our genetic preferences”. While there is no clear evidence that it is or is not, it is interesting that the subject is being researched scientifically.

And which accents make it attractive?

So, after I have written a lot about accents and have explained explanations why how to find accents attractive, let's now turn to the topic: which accents are perceived as sexy?

An interesting poll from 2016 comes from the British dating app happn. 1000 British people were interviewed by the company, which European accent will be most attractive to them. So it's about the British way of looking at Europeans of other nationalities who speak English. Perhaps you hoped it would, but you probably did not expect German to take one of the top places in the ranking? In fact, it is unfortunately the case that we Germans do not get off very well and, above all, our southern European continent colleagues with their accents (as well as with their temperament) clearly outperform us.

So the winners of the poll are the ones Italian!

As you can see, the German language together with Dutch and Greek the last, 8th place. Only one percent of the participants found these accents most attractive when the native speakers of these languages ​​speak English. During my research, I came across another survey from 2015. As part of this study were worldwide 11,000 people were asked which accent they perceive as “the sexiest”. I suppose this is about People who speak English, native speakers as well as foreign speakers. And guess what accent won the day?

British English! The (British) author of an article in Psychology Today firmly believes that the British accent is both attractive and lovely, but also testifies to credibility, elegance and competence. So British English beats the accents of all other English-speaking nations. And in this poll, the most popular accent is foreign the French. Closely followed by Italian and Spanish. Again the southern Europeans.

And what do we do with our German accent?

The presented survey results don't sound so edifying to us as German native speakers. But you can't change your accent. Depending on your individual language skills and over time through a lot of listening and speaking, you can at most train yourself more or less. In one of our previous blog articles, you can read how to improve your pronunciation and sound (almost) like a native speaker. Check out our English Pronunciation Guide for more effective tips & tricks to improve your English pronunciation. And with our master class “Speak English With Confidence” you will learn to speak English with more confidence and confidence in just 30 days. But don't worry, you don't have to work off your accent completely to pronounce English correctly. Because: Foreign accents in general are usually interesting for our conversation partners, and sometimes even attractive. And if you stick to your accent and where you come from, that's only more attractive!

How do accents affect you? Which foreign accents do you find most attractive?