Will feminism be put on an equal footing

Equality: women and men are not yet equal around the world

Women and men are far from being equal. Equality in all social, political and economic areas is still slow. On the one hand, this results from the Gender Equality Index 2019 of the European Institute for Gender Equality. This is composed of the evaluation of the EU countries in six categories in relation to the sexes: work, money, education, time, power and health. There are also factors such as violence against women. 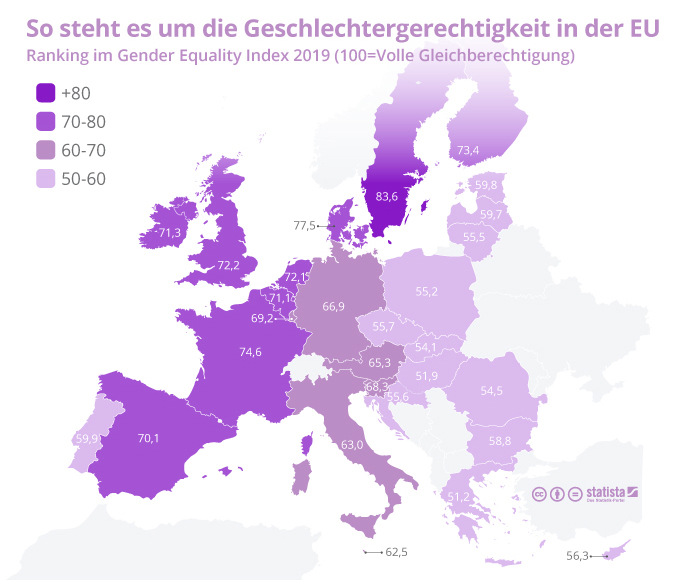 A survey by Ipsos in collaboration with "International Women's Day" and the "Global Institute for Women’s Leadership" also showed that there are still major hurdles on the way to greater gender equality. More than 18,000 people in 27 countries were surveyed.

Almost every second German (44 percent) believes that it is still an advantage to be a man today. Conversely, just one in ten (12 percent) believe that it is more advantageous to be a woman in Germany. Around three in ten people (28 percent) think that it makes little difference in this country which gender you belong to. In many other regions of the world, people see even more advantages in being a man. Especially in Latin American countries such as Chile (72 percent), Colombia (64 percent) or Argentina (62 percent), men are considered to be particularly privileged.

Little identification with the term feminism

So people are well aware of the persistent inequality between men and women. For a clear majority of all respondents, achieving greater equality is therefore also an important personal concern - both in Germany and globally (65 percent each). Nevertheless, only one in three (33 percent) worldwide would describe themselves as a feminist. In the Federal Republic of Germany, the term feminism has an even greater stigma: only three out of ten German women (28 percent) define themselves as feminists. Not even one in five men (18 percent) in this country can identify with this term.

Declining interest in the topic of equality

It is also noticeable that the approval ratings for equality issues have fallen sharply compared to previous years. While in 2018 three quarters of Germans (74 percent) stated that equality between men and women is important to them personally, only two thirds of those surveyed (65 percent) did so a year later. The proportion of people who describe themselves as feminists has fallen by a total of five percentage points (from 28 percent to 23 percent).

At the same time, the proportion of those who are convinced that enough has already been done in Germany with regard to equality between men and women is increasing. More than four in ten men (43 percent) agree with this statement, a year earlier this figure was 34 percent. German women see a clearly greater need for action, but the proportion of those among them for whom the issue of equality is becoming less important is also increasing (increase from 25 percent to 28 percent).

Unequal pay in Germany is the biggest gender equality problem

Nonetheless, many respondents believe that women still have major hurdles to overcome on the path to full equality. In Germany, the unequal pay of women and men is viewed critically: every third German citizen (32 percent) rates this as one of the most serious problems women are confronted with in today's society. Sexual harassment ranks second among the most important gender equality issues (17 percent), followed by sexual violence (15 percent) and the lack of women in management positions (12 percent).

From a global perspective, the issues of sexual harassment (30 percent), sexual violence (27 percent) and physical violence (22 percent) are of particular importance.