What is an eggplant 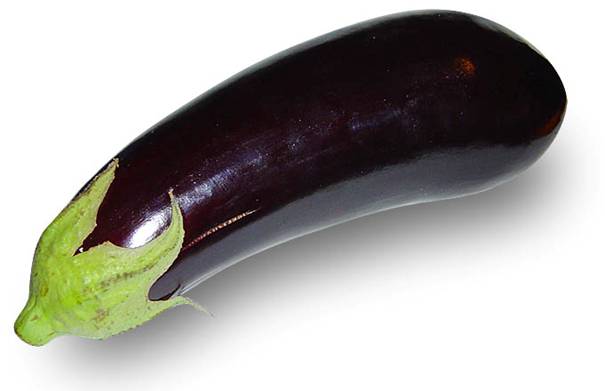 The aubergine (Solanum melongena) or Melanzani is a subtropical plant species that belongs to the nightshade genus (Solanum) within the nightshade family (Solanaceae). In German it is also used to describe the club-like, dark purple to brown, shiny bush fruit. When ripe, eggplants are eight inches long and are eaten steamed, fried or boiled as a vegetable. As long as it is immature, the eggplant contains solanine and is therefore poisonous. Aubergines also have the second highest content of the neurotoxin nicotine after the tobacco plant.
It used to be called "egg fruit" and in English the aubergine is still called eggplant - a name that you can only understand once you have seen the most original of the existing varieties: its fruits are white and hardly bigger than chicken eggs.
The aubergine (Solanum melongena) is an annual nightshade plant, a relative of tomatoes, potatoes and peppers. It grows up to a meter high. Their original home is India.
The common varieties have a glossy, black to brownish-purple or even "aubergine-colored" skin, a pear to club-like shape and weigh between 300 grams and one kilo.
The aubergine needs warmth and feels good in the Mediterranean climate. It plays an important role in the cuisine of the Mediterranean countries and the Balkans. Greeks and Turks appreciate the moussaka, a casserole with eggplant and minced sheep meat, as a national dish.

Extraction of dye from the eggplant

To get the coloring from the eggplant, we have to cook the shell of the eggplant. To do this, we remove the peel from the fruit and boil it in water until a light red-violet solution appears. Then the solution only has to be filtered off in order to separate the dye from the fruit peel.

Anthocyanins are chymochromic dyes that can only be found in the cell sap of land plants, but not in animals, microorganisms or aquatic plants. This is because the biosynthesis of the anthocyanins requires products that are produced during photosynthesis in plants. In aquatic plants, however, the photosynthesis turnover is not sufficient for production due to the low light intensity under water. But not all land plants contain anthocyanins: in the carnation-like, cacti and Mollugo plants, betalaine take on the role of anthocyanins.

Thin-layer chromatography (TLC, TLC) is a physico-chemical separation process for examining the composition of samples. It also serves as a quick proof of its purity and identity. A known reference substance is often applied at the same time as the actual sample.

The method is based on migration processes in a liquid (solvent) that flows through a powder layer (chromatogram / separating layer).

It is also necessary that methods are available to make the usually colorless molecules visible, so the chromatograms are viewed under UV light.

We put a small amount of the diluted sample solution to be examined (aubergine) as punctiform drops on the silica gel chromatogram, which is also called the separating layer or stationary phase.

This separating layer is applied very evenly to a carrier film.

The TLC foil with the aubergine extract applied on the starting line and the cherry extract as a comparison sample that we put in the TLC chamber with the mobile phase. In order to prevent the results from being influenced by the evaporation of the solvent, the separation is carried out in a closed vessel. We used ethyl acetate: butanone: formic acid: water = 5: 3: 1: 1 as the mobile phase.

A mixture of a non-polar and a moderately polar organic solvent is usually used as the mobile phase (e.g. petroleum ether and ethyl acetate). The solvent is now sucked up into the stationary phase via capillary forces. As soon as the liquid has reached the mixture spot, it is dissolved; its molecules are now exposed to the forces of attraction of the stationary phase on the one hand and the forces of attraction of the mobile phase on the other. Depending on the balance of forces, a particle tends to stay at the starting point or it tends to move upwards with the mobile phase.

UV / VIS spectroscopy is a spectroscopy that uses electromagnetic waves of ultraviolet (UV) and visible light (VIS for "visible"). The method is also known as UV / Vis spectrophotometry.

The pH values ​​4, 7 and 10 have thus established themselves. We were able to do the encore

the buffer notice a color change.

Molecules are irradiated with electromagnetic waves in the range of visible and ultraviolet light. Valence electrons from, for example, the p and d orbitals of the outer shells are excited. The energy absorption of the molecule under investigation provides information about the bonding conditions in the molecule.

The light source emits light in the wavelength range from about 200 nm to 800 nm. The wavelength selected for measurement is first selected in the monochromator, whereupon the light beam falls on the sector mirror. The sector mirror lets the light fall alternately through the measurement solution and through the comparison solution. Both solutions are in so-called cuvettes. The two light beams are received in the detector and the intensities are compared in the amplifier. The amplifier then adjusts the intensity of the light beam from the comparison solution to the intensity of the light beam from the measurement solution by retracting the comb diaphragm. This movement is transferred to a recorder or the measured values ​​are passed on to a data processor.