How do Chinese choose names for children

This 16-year-old is said to have earned 57,000 euros - by helping Chinese people name their babies

Gandalf, Cinderella or Rolex: This is what Chinese parents apparently call their children - because they hope that the offspring will later study or have a career in Western countries, but do not know that such names are not socially accepted there. The 16-year-old Briton Beau Jessop therefore launched the “Special Name” website, on which she supports Chinese parents-to-be in choosing a name. Within a few months she is said to have turned over 57,000 euros. Hardened conversion optimization mechanisms apparently also helped.

Beau came up with the idea for her site while on a trip to China with her father Paul Jessop, who is doing business in Asia. “I was at dinner with him and his work colleagues and one of the women said, 'Oh, what should I call my daughter? What English name should I give her? ’", Jessop told the British Times. She was surprised and overwhelmed by the request. The lady then stated that an English name was essential for Chinese children. Apparently, parents in China are speculating that their children with an English name have better chances when they later apply for a study or a job in the western world.

"Hello, my name is pancakes!"

It shouldn't have been the last time that Beau was asked to come up with a name during the trip: "I was asked repeatedly to name babies by friends of my parents," the student told the Mirror. In addition, she had heard several times of examples in which parents had chosen embarrassing names for their children out of ignorance, inspired by luxury items (“Rolex”), or films (“Gandalf”, “Cinderella”, “Rambo”). In communities such as Reddit and the “Hacker News” forum of the Y-Combinator start-up program, users who have worked or traveled in China repeatedly describe encounters with young Chinese who, from a Western perspective, have rather unusual English names - such as “Pancake”, "Dolphin", or "Lucifer". "I realized that there could be an opportunity if you help the Chinese people find the right name right away," said Beau Jessop.

The student comes from a wealthy family: her mother is the former British television actress Lisa Maxwell, her father Paul Jessop is an entrepreneur. He not only owns the cuddly toy manufacturer "The Great British Teddy Bear Company", which operates an amusement park and several cafes in China, among other things, but also the language school chain "Big Red Bus", where Chinese children can learn English. Her father gave Beau a £ 1,500 loan, and with the help of a web designer, she set up her own website at SpecialName.cn.

If you call up the URL currently, you will find a technically relatively simple website based on WordPress at first glance; A shop function is integrated via the WordPress extension Woo Commerce. The visitors first have to choose whether their child will be a boy or a girl and then choose five of the twelve character traits that the parents hope for in their child. You will then receive three suggested names, supplemented by information about the original meaning of the name and about famous people with the same first name (such as Grace Kelly or Catherine Middleton). Via a link with the WeChat messenger app (as widespread in China as WhatsApp in this country), users can then share the selection with relatives and friends and discuss the choice again. After they have decided on a name, the parents-to-be also allegedly receive a "printed certificate" for the name. The cost of the entire service: around one euro. 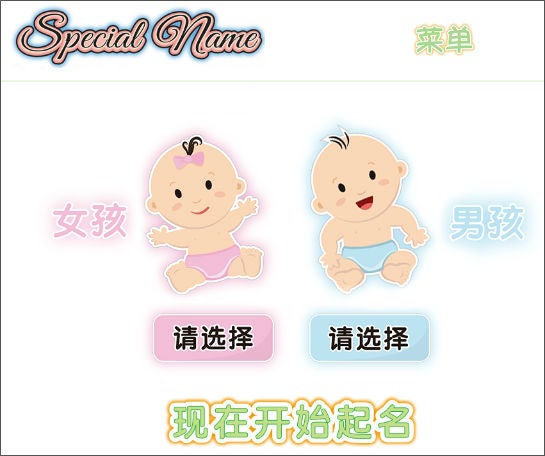 On the start page of Special Name, the parents-to-be must first indicate the gender of their child (screenshot Specialname.cn)

If you take a closer look at the website with the help of Google Translate, it becomes clear that it is already cleverly built and apparently conversion-optimized. On the home page, it is not initially apparent to the visitor that the service on the website will cost anything. At the foot of the website, visitors will come across a photo of a middle-aged woman wearing glasses, including text that gives the impression that it was written by the lady depicted - and that she is the operator of the website. “I'm Beau Rose Jessop, CEO and founder of Special Name. I have traveled to China many times in the past twelve years, ”you can read there. If you search for the source of the photo via Google's image search, you will see that it is a stock photo.

Screenshot from Specialname.cn - the photo on the left is a stock photo

If the visitor clicks further, he first has to select the desired character traits of his child. Only later, when he has invested a long time in using the website and the suggested names have supposedly already been created (but not yet announced), does it become clear that he should pay for the service. On the checkout page, the price is initially set at 68 Chinese renimbi (around nine euros) - but because of a “current promo”, users can reduce the price to 9 RMB (just under one euro) by entering the discount code “LOVE” - that's how you create buying pressure. The amount can be conveniently paid using the Alipay payment system widely used in China (part of the Alibaba e-commerce group). 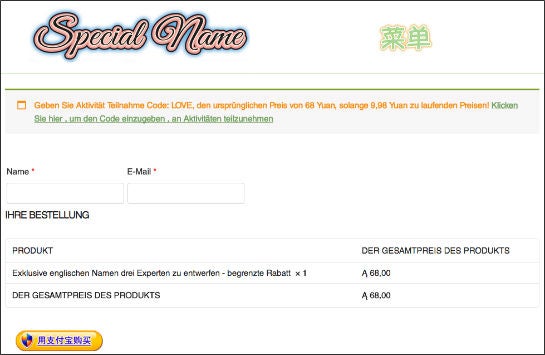 So far, the visitor counter on the website is 235,000. According to the report by the British Mirror, the website currently has an average of 27,000 visitors per month and a turnover of 16,000 British pounds (at the current rate almost 19,000 euros). The young entrepreneur has already earned a total of 48,000 pounds - around 57,000 euros.

Next goal: financing your studies 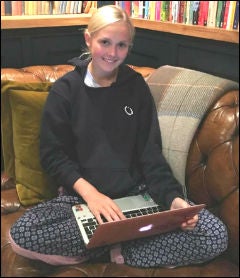 She just wanted to try out whether it could become more than just an idea and was surprised by the success of the story, says Beau. She found writing the texts for the website a good practice for her GCSE exam in Mandarin. But now she has set herself more ambitious goals: "I want to reach a certain amount so that I can pay my tuition fees later," the student told the Times. England has the highest tuition fees of any industrialized nation, according to the Guardian. At top universities, the annual amount can range from £ 30,000 to £ 40,000. After all, the market that the young entrepreneur is working on is very large: According to official statistics, between 16 and 17 million babies are born in China every year.

To improve her product, Beau spends two hours of her day reading and responding to customer feedback, and another hour working on the website, she told the Telegraph. For example, every day she adds 30 names to the database that currently has 4,000 names. Apparently, she usually selects the respective properties according to those of characters with the same name from British literature.

Although Special Name's website looks real and credible at first glance, there are remaining doubts as to whether the story behind it is really true, or whether it is a marketing / PR stunt after all. So it is very noticeable that many major British media outlets (including the BBC, the Times and the Telegraph) are reporting on Beau Jessop at the same time; international media such as Business Insider, the Huffington Post and Schweizer Blick am Abend have already picked up on the story.

Dubious: Where does the traffic come from?

And how does Special Name win visitors and customers? The most obvious source of traffic would be SEO. But if you translate “english baby name” into Chinese with Google Translate and enter the result on China's leading search engine Baidu, you will not find Specialname.cn anywhere among the results listed. Common online marketing and statistics tools such as SimilarWeb (traffic statistics), Searchmetrics and Sistrix (visibility in search engines) do not provide any data on Specialname.cn - but this can possibly be explained by the fact that the respective providers of the tool in China do not are active in business and therefore probably do not have any data from this market.

It is of course conceivable that Special Name advertises “Big Red Bus” in children's language schools and directly reaches potential parents there (after all, the one-child policy in China has now been abolished), as well as achieving word of mouth effects through the integration of WeChat. In two of the British articles, the alleged customer "Songbu Wang" is quoted, who found out about Special Name through friends.

Many questions remain unanswered - for example who would benefit from a potential staging. Was it possible that father Paul Jessop sent his daughter up because of the better story in order to boost a new business through the PR success? But what would a businessman expect to get press and attention in the western world with his company active in China? 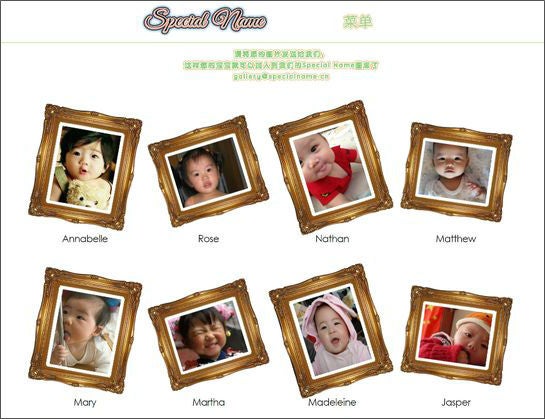 Whatever the truth, the makers of Special Name have definitely achieved a coup: The website is currently experiencing a surge of visitors due to the reporting and is currently reacting extremely slowly in some cases. And Beau Jessop - if she really is the creator of the site - has the next plans for the future: “Because parents love to share photos of their children, I recently added a gallery function. So I'm gradually building up a special name community. "