What was a punt gun

The British wild bird hunter Snowden Slights from Yorkshire, one of the last commercial shooters, on the hunt with one of his numerous punt guns (approx. 1900-1912) 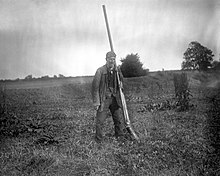 Snowden Slights with its largest punt gun in 1912

A Punt gun is an extremely large shotgun that was used in the 19th and early 20th centuries. Since these shotguns could not be shot free-standing due to the high recoil forces, they were usually fixed on elongated, flat row boats, so-called Punts, after which they were named.

The punt gun was mostly a one-off production. The barrel diameter of the up to three meters long shotgun was around two inches (51 mm). Around one pound (≈ 0.45 kg) of pellets were shot per shot. A single shot could hit up to 50 waterfowl at the same time.[1] It was initially mainly used for commercial waterfowl hunting.

The archer, lying down in marshland or on shallow waters, slowly rowed towards the wild bird population and fired his weapon at the soaring waterfowl from a close range.[1]

The success of this hunting method was so resounding that the use of punt guns to protect wild bird populations was regulated by law in the USA and Great Britain as early as the mid-19th century. The influence of well-off hobby hunters from the upper class also came to bear, who viewed commercial hunting as considerable competition to their leisure time and feared for their own hunting success. In 1870, hunting with punt guns was banned in the USA, but in 1876 a hunter boasted that he had killed 96 ducks with a single shot in the swamps of Horicon Marsh.[1]

In the 20th century hunting with the punt gun changed to a form of hobby hunting. According to the British Sport Shooting Society, there were around 180 active punt gun shooters in the period between the First and Second World War. Even today around a dozen hobby hunters in Great Britain hunt with this weapon, whereby the requirements for nature and species protection are very high.[1]

Media used on this page