In order to be able to explain this term, one has to go further: When a person looks at his environment, he is surrounded by light and matter. Physics develops very convincing models of what one has to think of as light and matter: light is electromagnetic radiation. This has been known since classical electrodynamics, which was discovered in the 19th century. Using the methods of quantum theory, the quantization of light in photons was discovered. Matter, on the other hand, is made up of extremely small particles, the quarks and leptons. The strong force holds the quarks together so that they become the building blocks of more complex particles. Protons and neutrons, the particles in the atomic nucleus, each consist of three quarks. The matter in our everyday environment consists exclusively of quarks and leptons. It is baryonic - as the physicists say. Note: It would be more precise to classify matter into a hadronic and a leptonic form.

As if this physics of light and matter weren't already complicated enough, astronomers discovered the need for a form of matter that does not (or very weakly) glow. It was named dark matter. At the beginning of the 20th century, based on the rotation of galaxies, it was recognized that luminous matter (stars, gas and dust) was insufficient to explain the rotation behavior. Since then, astronomers have been able to confirm again and again that there must be dark matter. Candidates for dark matter are heavy particles that have little or no electromagnetic radiation and only weakly interact. This class of particles is called WIMPs. weakly interacting heavy particles). Other forms of matter that could contribute to dark matter are supersymmetric particles. So far none has been proven with certainty or experimentally produced in particle accelerators, but there are a few indications from high-energy physics and string theory that supersymmetry plays a role in nature. 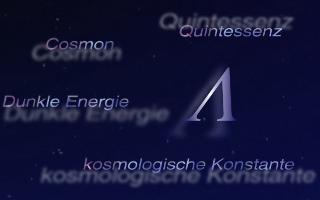 Let us now take the detour of the (halfway) known to the completely unknown, to dark energy. The designation Dark energy (engl. dark energy) was made by the cosmologistMichael S. Turner (University of Chicago, USA) invented in 1990. Dark energy means a form of energy in the universe that is neither baryonic nor can be identified with dark matter. It is dark because it is not noticeable through electromagnetic radiation. The dark energy appears because it has the Dynamics of the Universe significantly influenced. The dark energy takes care of the cosmic expansion! We know about dark energy because the visible objects in the universe (galaxies, radiation) indicate the expansion and indirectly indicate something dark. The methods of astronomy even make it possible to compare the proportions of baryonic and dark matter with that of dark energy. The result is you with over two thirds makes up the largest share: Dark energy dominates the (late) universe!

The form that was first discovered historically, which in retrospect must be called dark energy, was made byAlbert Einstein (1879-1955) proposed in 1917. In the field equations of his General Theory of Relativity (ART) he introduced the so-called Lambda terms (sometimes also called Λ-member) a. This lambda expanded the right-hand side of the field equation where the energy-momentum tensor is. This cosmological parameter influences the dynamics of the cosmos, depending on whether it is positive, negative or zero. A negative value of Λ turns out to be cosmic attraction (attraction) noticeable and makes the universe collapse ('anti-de-sitter'). This negative Λ thus acts in the direction of gravity. A positive value of Λ is called dark energy. It works in the form of an antigravity, which is also known as cosmic repulsion designated. When Λ disappears, the dynamics of the cosmos is only determined by the matter it contains. Einstein introduced the lambda term to physically explain the static universe he favored at the time for aesthetic reasons. The American astronomerEdwin Hubble found, however, in 1929 that the galaxies are subject to an escape movement and the universe is expanding. This Hubble effect abruptly refuted the model of a static universe, so that Einstein rejected his cosmological lambda. He called this idea his "greatest donkey".
In the period that followed, however, it turned out that the cosmological Λ could not simply be made to disappear, like the Belgian cosmologist in particular Abbé Georges Lemaître (1894-1966) recognized. It found its way into modern cosmology under the name of cosmological constant. It is still indispensable today! Because even with the lambda term as an ingredient, one can find cosmological equations in which the universe expands. The global description of the dynamic cosmos succeeds in the relativistic cosmology with the Friedmann world models. They are model universes that are well understood mathematically. A Friedmann universe is a solution of the Friedmann equation, which is obtained from the field equations of the ART with the energy-momentum tensor of an ideal liquid plus the lambda term for spacetime of constant curvature. Why does a cosmologist do this? The matter in the cosmos can be roughly described as a flowing, non-interacting liquid. It follows that the energy-momentum tensor is suitable for an ideal liquid. The approach of a constant curvature results from the fulfillment of the cosmological principle: No point in the universe is distinguished from another. The universes with non-vanishing lambda are part of the so-called Λ cosmology.
Astronomers measure the matter content of the universe and its rate of expansion, e.g. on the basis of very distant star explosions. These are high-redshifted supernovae (SN) of type Ia, i.e. extremely distant, exploding white dwarfs. As part of the Supernova Cosmology Project (SCP) was first observed in 1998 that the Expansion of the universe even accelerated becomes (Perlmutter et al., published 1999)! So there is no constant expansion speed (see also Hubble constant), which must be rated as one of the most important discoveries in cosmology.

The star explosions also make it possible to assess whether the different forms of energy in the universe change over time over very long periods of cosmological terms (billions of years!). So they have Permanence measurements of dark energy at SN Ia show that Einstein's cosmological constant must be favored (Riess et al. 2004). It has a w-parameter of w = -1. This is confirmed by recent measurements on a group of 24 SN Ia that were observed with the Hubble space telescope. The figure above shows five of them: the host galaxies before the stellar explosions (bottom row) and after the explosions with brightly lit SN Ia (large version, Credit: Press release NASA / ESA, STScI, A. G. Riess, November 2006). The new supernova data impose even stricter requirements on dark energy: it must have been constant nine billion years ago. This means that the time-varying forms of dark energy do not appear preferred.
These results were from the current supernova survey ESSENCE (E.quation of S.tate: S.upE.rNovae trace C.osmic E.xpansion) 2007 confirmed: 60 SN type Ia with a maximum redshift of up to z ~ 1 were analyzed. Assuming a flat universe and taking into account the constraints on baryonic matter, these observations also follow w = -1.05 and Ωm = 0.274 (Wood-Vasey et al. 2007, astro-ph / 0701041;Miknaitis et al. 2007, astro-ph / 0701043; appear in ApJ). ESSENCE is thus consistent with the previously published results of the SuperNova Legacy Surveys (SNLS, Perlmutter et al.). If you combine both surveys as follows: w = -1.07 and Ωm = 0.267. The burden of proof for Einstein's static w-parameter (w = -1; w ' = 0) is currently overwhelming!
According to the current state of knowledge, the universe has a transition of 0