What is a quasar 3 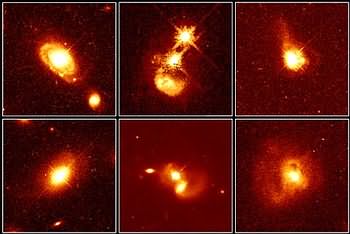 Quasars are probably the best-known representatives of the Active Galactic Nuclei (AGN), probably also due to the fact that they keep appearing in the media. They have an extreme luminosity: the most luminous quasars reach 1047erg / s - this corresponds to a hundred trillion solar luminosities and exceeds normal galaxies by far! In principle, quasars show this activity at all wavelengths of the electromagnetic spectrum. Quasars are widely known for their incredibly long distances, ranging from millions to billions of light years. This also means that they must have formed very early in the universe. The models for galaxy formation are therefore a challenge for cosmologists.

Let's first clarify the names: Quasar is an made-up word quasi-stellar radio source, i.e. are quasars radio loud (high radio luminosity). The abbreviation QSO stands for quasi-stellar object, the radio quiet are (low radio luminosity). The terms quasar and QSO are often used synonymously in literature, but actually refer to different, cosmic objects! Quasar is often used as a generic term for both.

Quasars were discovered by radio astronomy in 1960 (3C 48, 16.like). Visually, they initially appeared star-like: They looked like a point of light that could not be resolved with telescopes. The Hubble Space Telescope (Hubble Space Telescope, HST) photographed the for the first time in 1996 Host galaxies of the quasars (Figure above right, Credit: Bahcall et al., STScI / NASA, 1996). It was therefore clear that quasars are the bright nuclei of galaxies: Quasars are embedded in host galaxies. host galaxies). In the case of the quasars, the host galaxies can be of any Hubble type. However, a special accumulation can be found in elliptical galaxies, i.e. very developed star systems.

From the standpoint of theoretical astrophysics, the quasars are extremely interesting study objects. The biggest puzzle: where does this incredible luminosity come from? It quickly became clear that the observation could not be explained by thermonuclear fusion, as it takes place inside stars.
The theorists presented a physical model as early as the mid to late 1960s, soon after the quasars were discovered. Russian astrophysicists are among the pioneers of this idea Yakov B. Zel'dovich & Igor D. Novikov (1964), the Austrian nuclear physicist Edwin E. Salpeter (1964) and the British astrophysicist Donald Lynden-Bell (1969). They explained the enormous brightness by that Accretion to a supermassive black hole. That is exactly what is firmly rooted today Paradigm for all AGN. Accretion is the most efficient mechanism for producing radiant energy from matter bound by gravity. How this works in detail is calculated in the Eddington luminosity entry. Quasars are close to the Eddington limit.
The fate of matter falling into a black hole is simulated with modern high-performance computers. Methods from magnetohydrodynamics and general relativity are used in these supercomputer simulations. It gets very hot near the hole, so the incident matter becomes a plasma made up of electrons and ions. This plasma moves into a black hole under the influence of electric fields and magnetic fields on the background of curved spacetime. In astrophysics it is now clear that the rotation of the hole plays an essential role (see Kerr solution). Accretion is associated with important magnetic effects in the accretion flux, e.g. with magnetic rotational instability and with the magnetic catapulting of matter, which is then bundled into relativistic AGN jets. The scenario is detailed under the entry on supermassive black holes.
The spectra of this incident matter follow in theory with a second step: the now known dynamics of the plasma are used to calculate radiation processes (Comptonization, synchrotron radiation, bremsstrahlung; general radiation transport). Better, but numerically much more complex, is the direct coupling of covariant radiation transport to hydrodynamic or magnetohydrodynamic equations. Theoretical astrophysicists around the world are currently working on consistently solving this problem. The first work in the field of general relativistic magnetohydrodynamics (GRMHD) are from Koide et al. 1999, De Villiers & Hawley 2002, Gammie et al. 2003, Semenov et al. 2004.

Quasars and radio galaxies are related

Astronomers count significantly more representatives in the group of radio-quiet QSOs than in the radio-loud quasars. The activity in the radio range can also be based on the intrinsic brightness in all spectral ranges, the so-called bolometric luminosity, transfer. The radio-quiet QSOs seem to be related to the weaker AGN types, such as the Seyfert galaxies. The radio-loud quasars, on the other hand, are like that Prototype 3C 273, related to the radiolucent radio galaxies such as Cyg A.
Even the morphology of quasars and radio galaxies is strikingly similar and uses the same nomenclature for observable radio structures: Core, Hot spot, Praise and jet (Terms explained under FR classification). The astonishing similarity differs only in the length scale. On the homepage of the Very large arrays (VLA), an arrangement of 27 radio telescopes in New Mexico (USA) that can generate high-resolution radio images using interferometry, one can view colorful images that clearly demonstrate the related morphology

If you consider the spectra of the Seyfert galaxies and the quasars, you can essentially divide them into two classes. It was soon suggested that this Dichotomy (dichotomy) is the result of an orientation effect (Antonucci & Miller, ApJ 1985; Antonucci, ARA & A 1993): at a distance of a few pc from the center of the AGN there is an extensive, molecular dust torus. This 'cold tube of matter' is difficult for optical radiation and soft X-rays to penetrate. If the AGN happens to be oriented so that the terrestrial observer can look into the core region from above, the dust torus does not block the view. The angle of inclination (Inclination) between the symmetry axis of the torus and the viewing direction is small. In this case, astronomers speak of one AGN type-1.
At high inclination, however, i.e. angles between about 60 and 90 °, the observer looks more or less at the edge of the dust torus: the view into the center of the AGN is blocked. So the astronomers say about this active galaxy AGN type-2.
Exactly this effect can also be seen in the spectra, so that astronomers can classify the AGN with optical radiation and soft X-ray radiation. In the X-ray spectra of AGN type 2, the proportion of low-energy X-rays is missing because it was lost through scattering in the dust torus. Overall, astronomers note that Type 1 (small inclination) quasars make up about 90% of all quasars; the remaining 10% are type 2 quasars (high inclination). The type 1-type 2 nomenclature has prevailed above all in Seyfert galaxies and quasars.
The astronomers have found that the classification can be different depending on whether the AGN was classified optically or by X-rays. Of course, that is not what we want. The cause of this are disruptive effects, for example from the host galaxy. A good choice is a combination: near AGNs are classified with X-rays and distant AGNs optically (Szokoly et al. 2004).
Current research shows that this is a purely geometric effect Not is sufficient to explain the two types of AGN: About 230 bright AGNs were observed with the Japanese X-ray satellite ASCA (Ueda et al. 2003). There was particular interest in AGNs, which emit hard X-rays. The trend has now emerged that the proportion of AGN type 2 decreases when the luminosity of the AGN increases! This luminosity effect cannot be explained geometrically. One possible explanation is that a very luminous quasar 'sweeps' its surroundings with the violent radiation pressure. In this way, the blocking dust torus would also disappear and with it Type-2.